How the best are catching them in the All-American 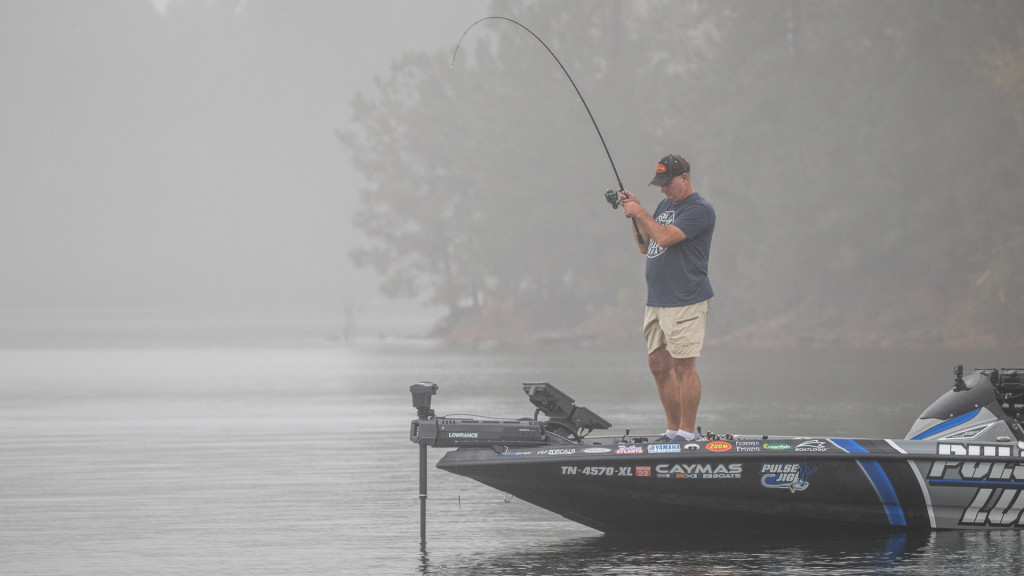 As projected, Hartwell isn’t giving up big limits for the Phoenix Bass Fishing League presented by T-H Marine All-American presented by TINCUP. Still, there are plenty of fish being caught, and if you want to chase offshore spotted bass around, it’s a pretty good place to be right now.

Taking the lead on day one, Dustin Lippe rustled up an even 12 pounds of spotted bass off the bank. Behind him, much of the top 10 is doing the same thing, albeit with their own tweaks on the process. 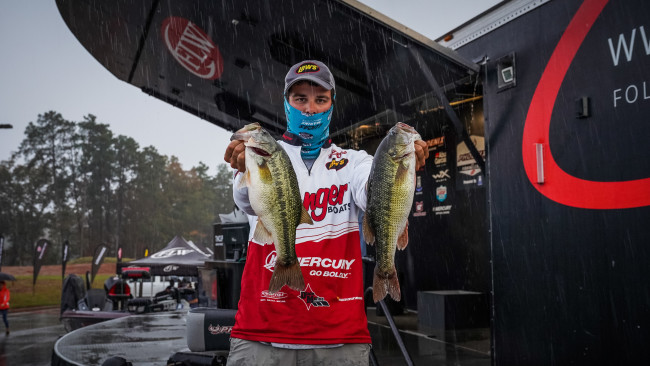 Coming off his rookie season on the Tackle Warehouse Pro Circuit, Cole Floyd is catching them offshore, which should come as no surprise to anyone.

“I caught my best fish right at the end of the day on some stuff I didn’t fish, and I feel like there’s a good amount of fish there,” says Floyd, who practiced two days before the official practice day. “Today I ran a lot of new water, and I had three fish by 2:15. It seemed like they started biting real good at the end there, and I took advantage of it and ended up cracking a few.”

Weighing one largemouth that he caught with his spotted bass, Floyd described his pattern as “junk fishing.” Of course, he’s one of the few anglers around who could call hopping from place to place for offshore fish “junk fishing” with any degree of believability.

“I feel like I’m around the right size, it wouldn’t surprise me if I came in with 13 or 14 pounds of spots tomorrow,” says Floyd. “It’s there, I’ve seen it. Yesterday I saw them come up and caught a few of the right size. They just didn’t feed worth a dang today until right there at the end.” 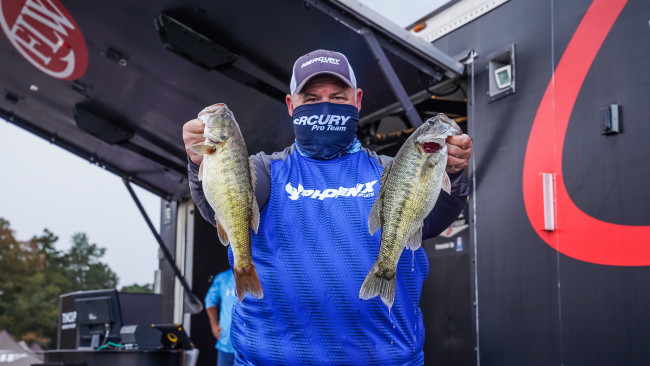 Tied for third, Bryan Dowdy is fishing his first All-American after qualifying via the Wild Card.

Like the rest of the crew, Dowdy is rolling around for offshore fish.

“It actually started out good, I caught one of the ones I weighed in on my second cast,” says Dowdy. “I had three real early, it calmed me down and helped me fish.”

Putting about eight keepers in the boat all day, including one largemouth, Dowdy is targeting specific cover.

“I cannot catch the schoolers, they come up, but I can’t catch ‘em,” he says. “I’m just catching the ones in the brush.”

Hailing from Alabama, Dowdy has never fished a tournament on Hartwell before.

“I came two different times for a couple days both times, but it’s not like the Tennessee River,” says Dowdy. “I live on Pickwick, the main difference is on our lakes, when you catch one you stay there and catch several. Here, if you catch one, you got to leave, it kinda freaks em’ out or something, I don’t know what happens.” 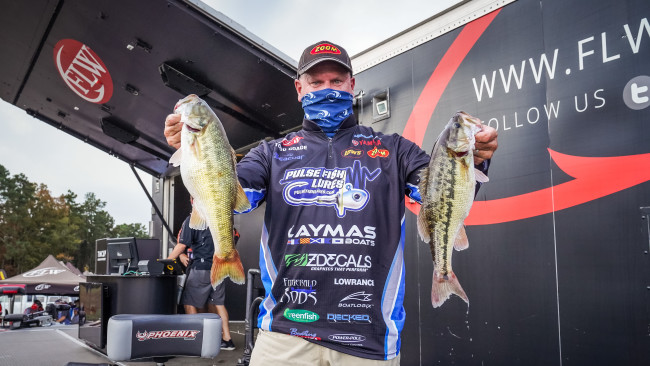 Also in third, Todd Goad is in the opposite position of Dowdy – despite a Tennessee address, he’s got years of experience on lakes like Hartwell and Lanier.

Catching about 15 keepers and weighing all spotted bass, Goade is fishing offshore brush, some that he’s planted himself.

“It started off kinda slow, and it was raining, and the fish weren’t acting right,” says Goade.  “There were literally fish on every stop we made, and they just wouldn’t bite. Finally, about 9:30, I caught my first keeper, and as the day went on the fishing got a little bit better. After lunchtime, when I stopped on a place, I could tell by the way the fish acted on the screen if they were going to bite or not.”

Rotating through a shaky head, other finesse baits and a topwater, Goade put together one of the best days from a number and size perspective and seems to be in a good position going forward. 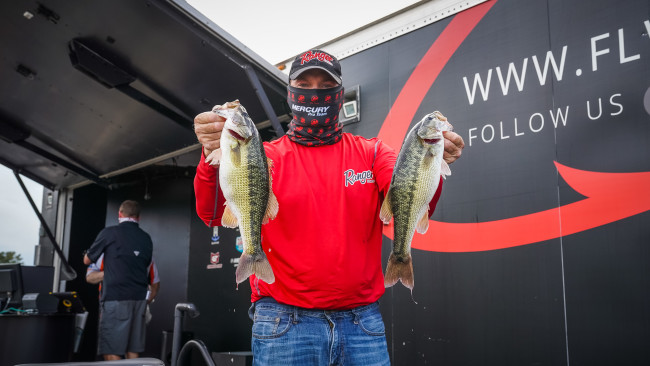 Chris Macy was on the verge of doing something different, but ended up adhering to the offshore spot game with everybody else.

“It was a struggle,” says Macy, who is out of the Ozark Division. “I ran into a little creek this morning, and I had a spot I was just sure I could catch five, and they were gone.”

By the time he’d figured out the fish were gone, Macy was socked into the creek by fog, so it was a while before he could get moving again.

“I was going to try to catch fish running the bank,” says Macy. “But, with absolutely zero wind I didn’t do that.”

In the end, Macy resorted to offshore spotted bass like the rest, catching eight or nine keepers.

“I’m throwing the tacklebox; I’ve never had so many rods on the deck in my life,” says Macy. “There doesn’t seem to be any rhyme or reason, I just have to keep rotating through it. I’m not from here, and I don’t know much about it, but about the time you think you have something figured out, the next bunch that comes up proves that you don’t.”