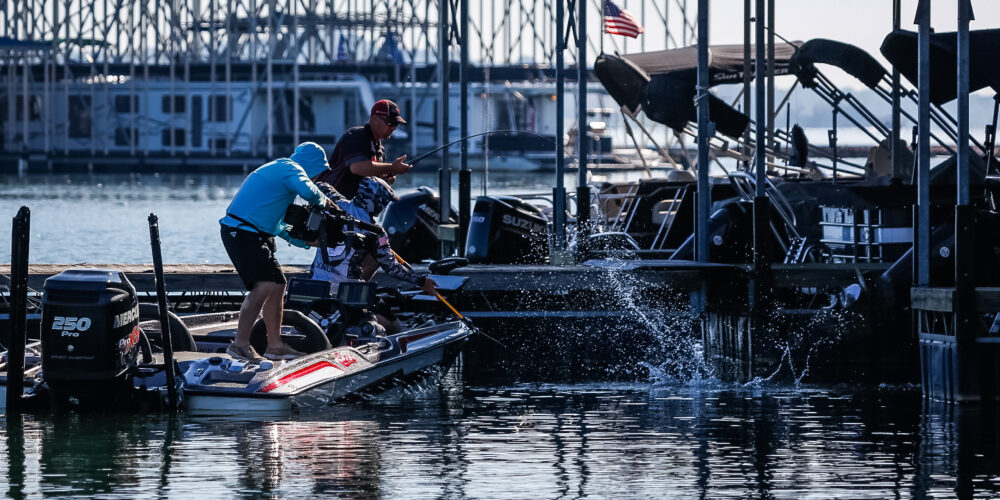 Clear skies and calm conditions greeted the Top 10 anglers on Championship Saturday of the Phoenix Bass Fishing League Presented by T-H Marine All-American on Douglas Lake. The bite was equally as quiet, with this week’s top performers struggling early in the day in this championship event presented by TINCUP.

After striking out at their first locations, we noticed several anglers making moves mid-morning in an effort to climb the leaderboard.

Day 2 leader Brant Grimm got off to a slow start. His offshore morning bite wasn’t there but he was still able to pick up two fish for around 4 1/2 pounds when we last checked in with him. He left around 10 o’clock in search of new schools.

Starting the day in second place, Leslie Brandenburg began by fishing shallow with topwater plugs and big swimbaits. He eventually made a move to a large cove to fish a glidebait.  Brandenburg only had one fish for around 2 1/2 pounds at the time but lost a big one at the boat right in front of one of our on-the-water reporters.

Blake Tomlin also found his fish missing in action this morning, although his report yesterday said the fishing only gets better in the afternoon. Time will tell with weigh-in looming.

Cody Hoyle seemed to be the only angler in the top five who caught them early, bagging a quick limit for 11 pounds in a marina by the dam. If his bite holds, he’ll be putting plenty of pressure on the anglers above him on the current leaderboard.

Roger and Chase Fitzpatrick started on bridge pilings early, looking to capitalize on a topwater bite. Finding no one home, the father-son duo moved shallow, flipping wacky rigs and a frog to catch a few keepers. At last report they were still shy of a limit and planning to head back to the bridge in search of a big bite.

“They were there this morning; we just couldn’t trigger them,” Roger says. “We’re going back to find some big ones.”

Throwing topwaters in Flat Creek has made for a frustrating morning for Austin Culbertson. As of 10 o’clock he was sitting on two fish with little weight between them.

Chris Baldwin caught a solid limit, around 10 pounds, by 11 o’clock. He reported two decent fish and a couple dinks.

“Now’s about the time I’ve been catching them,” he said. “I’ve just got to get them in the boat.”

With little to no action offshore, Chris Nelson has moved shallow. He’s netted four fish this morning, but knows some serious upgrades are needed to make a run at first place.

Harmon Davis is on a special bite in the shallows and caught more fish than anyone else we witnessed this morning. After several culls, he’s still in need of some size after starting the day over 5 pounds behind first place.

Leaving it all on the line, Dale Pelfrey began the day with some decent fish and had around 9 pounds when we last spoke with him at 11 o’clock.

“I’ve changed up my mindset today. I’m trying to catch the big ones,” he says. “I’ve been catching a bunch but haven’t had any luck with size.”

With just a couple hours left before weigh-in, time will tell who takes home the potential $120,000 payout. Catch all the action at Point Marina and Resort in Dandridge, Tennessee or tune in live at MajorLeagueFishing.com.