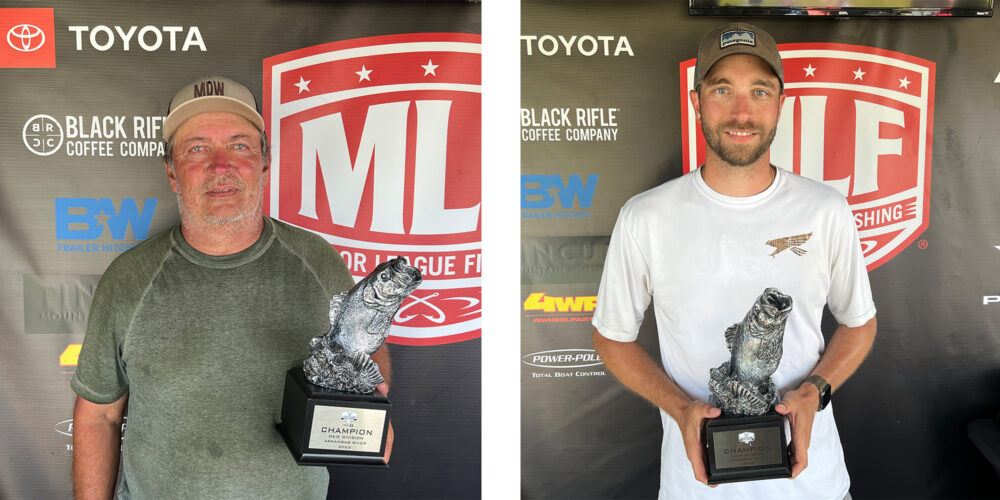 “It’s been brutally tough for Lake Eufaula for this time of year,” Riojas said. “Saturday, when I fished the first BFL of the weekend here, the lake was up and muddy. I ended up with one fish, and my co-angler pulled out two at the very end of the day.

“I stewed over that on Saturday night and decided to go back to the same spot because that’s the only spot I had caught fish,” Riojas said. “I worked a half-mile stretch of bank in the Porum Landing area back and forth all day and pulled out five keeper bites flipping buck brush in about 6 feet of water.”

Riojas said the day’s bites were few and far between and described the tournament as a “grind.” Riojas said his bait of choice for the day was a 4/0 flipping hook with a 5/16-ounce pegged weight and a green pumpkin Zoom Brush Hog.

“I’m pretty excited to win this,” Riojas said. “This was my 81st event that I’ve fished with Major League Fishing, and I’ve never had a win. The closest I came was in 2020 at the Toyota Series Championship on Lake Cumberland as a co-angler.”

Phillips had a largemouth that weighed 5 pounds, 8 ounces that was the heaviest of the event in the Boater Division and earned the day’s Berkley Big Bass Boater award of $550.

Huddleston caught the largest bass in the Co-angler Division, a fish weighing in at 5 pounds even. The catch earned him the day’s Berkley Big Bass Co-angler award of $275.