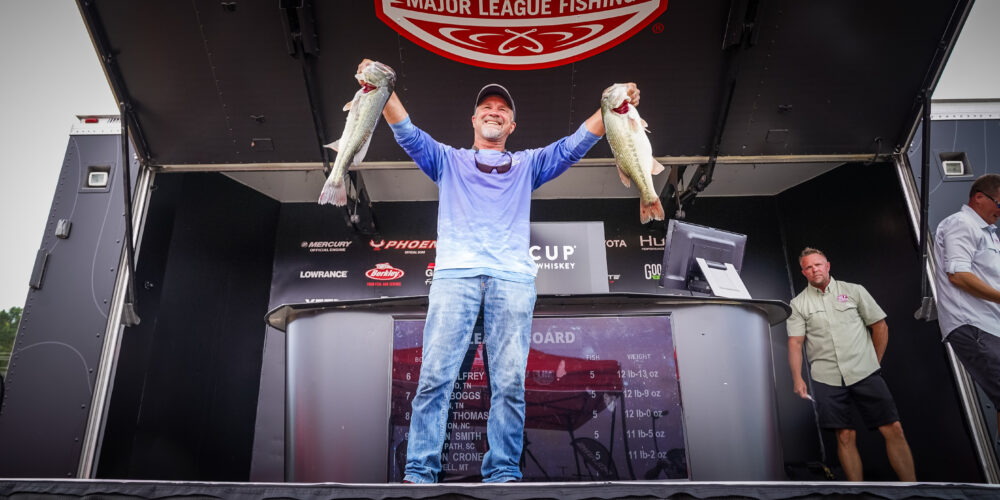 While most of the field came to Douglas Lake with the intention of fishing offshore in the Phoenix Bass Fishing League Presented by T-H Marine All-American, Leslie Brandenburg of Springfield, Missouri, brought an aluminum boat he rigged up specifically for this tournament to get dirt shallow. It worked on Day 1 to the tune of 18 pounds, 6 ounces, and a commanding lead heading into Moving Day.

Behind Brandenburg, weights are fairly stacked inside the Top 10 with 2 pounds, 10 ounces separating 10th from second. Cody Hoyle and Blake Tomlin both eclipsed the 15-pound mark to keep a little pressure on the leader.

Brandenburg has only been to Douglas Lake once before (as a co-angler), and as it turns out, the site of this year’s All-American Presented by TINCUP just seems to treat him pretty well.

“I’ve only been here one other time. We went up that river and I won a check that time,” he explains. “Sometimes it just works out and maybe it’s God’s plan. I hope. We’ll know tomorrow. You dang sure can’t win it the first day but you can lose it. Maybe I can make the Top 10.”

Making the Top 10 might just come down to hanging around on Day 2. As good as Douglas can be, it’s fishing fairly stingy right now, and just weighing double digits following an 18-plus-pound stringer should be enough to make the cut.

Part of that might depend on the weather. On Day 1, clouds and rain blanketed East Tennessee – a perfect combination for a shallow flipping bite. The forecast for Friday looks to have a little more sun in store for the area. Brandenburg knows that could make flipping up another massive limit a tall task.

Brandenburg chose to remain tight-lipped about his baits of choice this week (admitting only that he’s flipping a jig), though he did say he’s targeting a lot of flooded bushes way up the river. He certainly came well-prepared for the task.

“I brought a boat that I built,” he says. “It’s an aluminum Xpress. It’s got a hydraulic jack plate. I built it purposely to get to places where other people can’t go. It’s a rugged old boat and I’m not afraid to tear it up to go catch them.”

The boat in question is one Brandenburg has never fished a tournament out of. He pieced together his motor, electronics and everything else specifically for the All-American and for getting dirt shallow. Fatefully, that was a brilliant decision – at least so far – given that most of the rest of the field spent Day 1 targeting Douglas’ substantial offshore bass population. And if Brandenburg’s best areas don’t produce again on Day 2, he’s got some backup plans that he thinks can “carry him through.”

Whatever ends up being the case, Brandenburg is proving so far that sometimes going against the flow can get you there quicker.

It’s not often you see anyone – Strike King co-angler or boater – able to take a Day 1 lead with anything less than a limit, but that’s just what Rod Mackinnon did fishing from the back of Lloyd Pickett Jr.’s boat on Thursday.

The Middletown, New York, co-angler weighed in four fish for 13-6 to grab a nearly 2-pound lead. Almost as impressive, Mackinnon got just five bites on the day.

“I never even stuck the fifth one,” he says. “He bit it, I swung on him and there was nothing there.”

Still, Mackinnon was around the right fish all day thanks to Pickett, who showed Mackinnon the ropes on a fishery he’s never been to both in practice on Wednesday and in the tournament on Day 1.

“He’s competed at the highest levels on both sides and he’s a stick,” he says of his boater. “I learned a lot between today and yesterday in practice being able to go out there with him today.

“I’ve never been to a ledge lake ever. He taught me a bunch between practice and today, looking at electronics and how to set up on them.”

Being around fish is only part of it, though. Mackinnon still had to get them to bite, and he did so by fishing painfully slow – often working his “fluke-style bait” for five or six minutes per cast.

“I’m throwing something I don’t think anyone else in the field is throwing,” he adds. “It’s something I do up North back home in New York. It’s working. If I can catch four and they weigh that much, it’s worth it only getting four bites.”

Of course, Mackinnon is going to have a different boater on Day 2, and he might have to try something different if he winds up spending some time up shallow. Still, he’s comfortable with that, too.

“I honestly hope I go shallow,” he says. “I want to go shallow tomorrow. I think there’s a better opportunity for co-anglers up shallow right now. I’m real comfortable up shallow. You’re around more numbers and you don’t have to talk them into eating as much.”

If Mackinnon does end up fishing offshore again, he’s just hoping he has enough ammo to get the job done.

“I found out pretty early on Monday in practice that they’ll eat it, and it made me happy,” he says. “I wish I’d have brought more with me because I only have a couple left, but I should have enough hopefully for three days.”