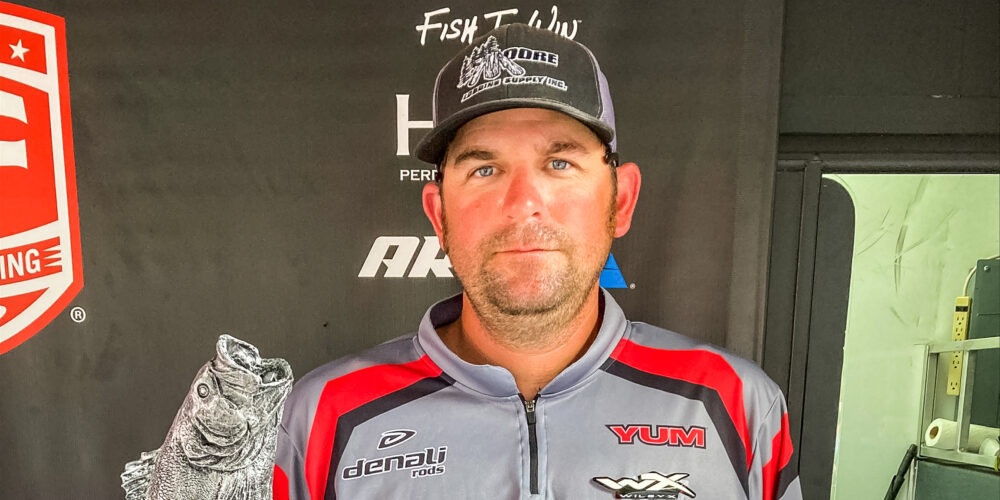 Essentially growing up on Lake Ouachita, Kevin Brown has spent the majority of his life learning the ins and outs of the Arkansas impoundment, and this past weekend he was able to bring home the top spot in the Phoenix Bass Fishing League Presented by T-H Marine Regional on his home turf. Tallying 40 pounds, 13 ounces over three days, Brown claimed over $67,000 in winnings, which consists of a new Phoenix boat and nearly $20,000 cash.

Not only was winning on a lake he’s more than familiar with special, but Brown also got to fish the way he loves – offshore.

“I’ve been fishing it since I was 10 years old, so I’ve had 20 years or so of just fishing it,” Brown said. “It’s one of my home lakes. And I caught them fishing offshore, which is my most favorite way to fish.

“The week of practice for the event I fished shallow some, but I got bit pretty quick offshore and I kind of extended it from there. My key was 23 to 28-foot deep and it was mainly all just channel swing stuff. I never made a cast to the bank during the tournament.”

Focusing on brush and rock on channel swings, Brown thought that he may have let the tournament slip through his hands after Day 1.

“After the first day, I thought I’d blown it when I came into weigh-in,” said Brown of his 11-6 limit. “When the tournament started the fishing just got tougher and I don’t know what happened. But after I saw the weights on Day 1, I knew I was still in good shape.”

With his confidence back up, Brown stuck to his guns and ran his offshore program on Day 2 with much better success.

“I did the same exact thing [on Day 2],” Brown said. “The second day I just got a couple good bites.”

Weighing the biggest limit of the tournament on Day 2 (17-8), Brown put himself in the lead by over 5 pounds heading into the final day. While he knew his lead wasn’t totally safe, he felt confident that a decent limit could help secure the win and send him back to the All-American.

“When I got to 10 pounds I knew I had clinched the berth into the All-American, but I wasn’t sure that I had enough to win,” Brown continued. “Then I got to 12 pounds and was feeling a little better, but I still wasn’t comfortable because of the guys behind me. Mike (Brueggen) is an unbelievable angler, and Brian (Bean) is one of the best guys on this lake. I hustled until the very end, because the two guys behind me were very dangerous and it was a very uncomfortable feeling all day.”

Doing the damage for Brown was either a YUM YUMbrella Flash Mob Jr. with YUM Pulse Swimbaits (shad-colored) on ¼-ounce jig heads or a ½-ounce green-pumpkin-colored War Eagle Heavy Finesse Jig. For the A-rig, Brown chose a 7-foot, 8-inch extra-heavy Denali N3 and for the jig he threw a 7-foot, 4-inch medium-heavy Denali N3 rod.

Running a Phoenix boat, which he got from Horizon Trike and Marine Center, Brown was able to capitalize on the lucrative $7,000 Phoenix MLF Bonus contingency as a part of his winnings. Though the money and a Regional title are a big deal, for Brown, the chance to compete in the 2022 All-American on Lake Hamilton is an even better prize.

“Getting to go back is an unreal feeling,” Brown said of competing in the All-American. “The first time I got to go, me and my dad both made it on the boater side. But this one means a lot. Me and Brian travel together and for him to make it too means a lot. To get to fish the All-American on a home body of water is a great opportunity. I just wanted the opportunity.”