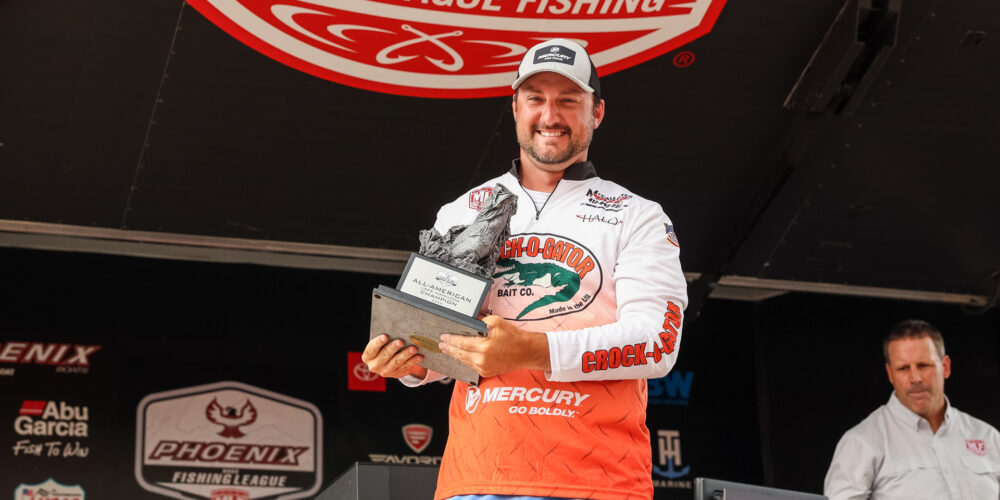 HOT SPRINGS, Ark. – It was nothing but domination from start to finish for Missouri angler Connor Cunningham as he was named the champion of the 39th annual Phoenix Bass Fishing League Presented by T-H Marine All-American on Lake Hamilton on Saturday. Cunningham led from Day 1 and never relinquished his lead to claim the $120,000 check and a trophy that will last forever.

Cunningham finished with a three-day total of 44 pounds, 4 ounces after adding an 11-10 limit on his final day of competition. Cunningham was able to beat second-place boater Hunter Eubanks by 11-11 to claim the title. After only one full year fishing BFLs in the Ozark Division, Cunningham is the All-American champion.

Triumphant with a Topwater

Cunningham kept his cards close to his vest for the week about what exactly he was doing to catch his fish. He mentioned a couple of times that he thought he was doing what no one else was, so he didn’t want to give anyone ideas. With his victory secured and no reason not to share his secrets, Cunningham finally opened up after the win.

“I knew during practice that I had enough fish out deep to catch a limit, so I started throwing a River2Sea Whopper Plopper 110 in bone up shallow just to see what I could do,” Cunningham finally admitted. “Ninety-eight percent of my fish this week came on a topwater. That’s the bait that did it for me, without a doubt.”

The Springfield, Missouri, native spent most of his time up shallow with that Whopper Plopper to fill his limit, then began to turn his attention to his Strike King co-angler. Most of the time, that meant heading out to deeper water to fish brush piles. While he comfortably filled his limit all three days up shallow, it was never about staying in a certain area for him.

“I fished really all over the lake and never was dialed into one specific area,” Cunningham said. “I ran about 30 to 40 spots below the Highway 270 bridge. I quit trying to catch them after I filled my limit on the first day because I knew this lake was so small and I was going to need all the fish I could get. That thinking paid off.”

Cunningham was never pressured or challenged during the weigh-in. He entered the day with over an 8-pound lead over Eubanks. Through nine different anglers, Cunningham’s name never left the top spot. By the time he was ready to weigh his fish, it was already solidified that he would be the All-American champion.

Dreams of Turning Pro Get Real

Cunningham isn’t a professional yet, and certainly doesn’t claim to be. He spends his days working for a beverage company back home in Missouri and fishes whenever he gets the chance. He was unable to fish the Toyota Series for the 2022 season due to scheduling conflicts, but the 31-year-old says he now plans to clear some time in 2023 for the next step in his fishing career.

“I can’t even believe I’m here, to be honest with you,” Cunningham said in disbelief. “This is huge for me in my journey to doing this full-time. I aspire to fish professionally one day and this win certainly helps with that. I’m just speechless and so blessed and honored to be here and win. This is a good group of guys in this field, so to win this one is really special.”