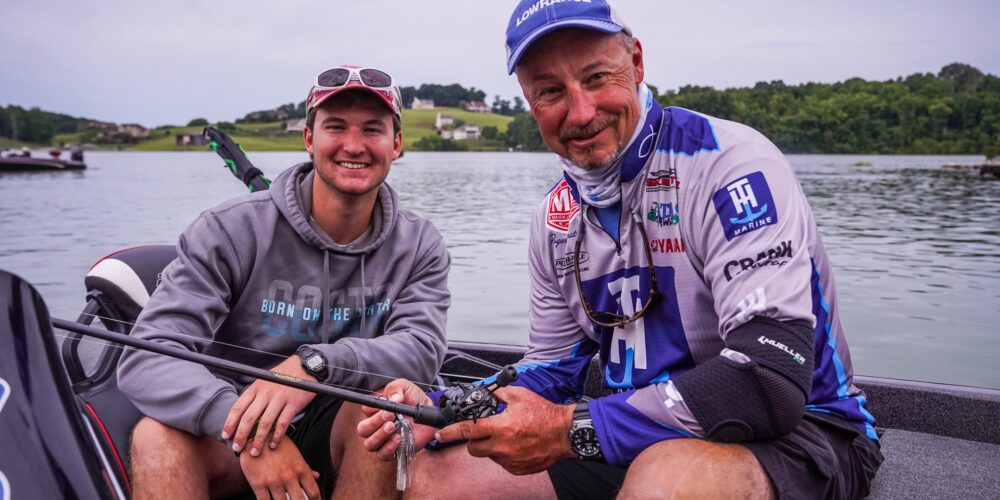 Back in 2001, Roger Fitzpatrick fished his first Phoenix Bass Fishing League All-American, finishing third in a May showdown on Lake Hamilton. Since then, the Missouri angler has continued to excel at the BFL and Toyota Series level, taking money from folks all across the Ozarks and adding six MLF wins to his total. Still, despite being on the eve of his eighth All-American, he’s never done better than he did that first time. Though the challenge at this All-American on Douglas Lake will be stiffer than ever, he’s doing it for the first time with his son, Chase Fitzpatrick, in the field on the Strike King co-angler side.

Father and Son Take On the All-American

Back in the fall of 2020, the Fitzpatrick family put together a heck of a week in the Regional on Table Rock. Taking the win, Roger locked up his umpteenth All-American appearance. Finishing third on the Strike King co-angler side, Chase qualified for his first.

“It was a huge tournament, and Chase made his first All-American,” says Roger. “It was a lot of fun. He’s been able to travel with me and practice for five or six All-Americans, and those have been special. And then, he was [at Douglas Lake] two weeks ago when we got to practice down here.”

A rising junior at the University of Missouri, Chase plans to join the bass fishing team in the fall after falling deeper and deeper into bass fishing.

“I didn’t really start fishing BFLs until I was 18 probably, I was doing so much in high school with sports,” says Chase. “Last year was the first year I really tried to make the Regional. To be able to do so well in it and have some amazing partners was awesome.”

Making the Regional and the All-American on your first try is pretty special, but Chase is surrounded by fishing heritage that puts him in good shape to do so.

“I’m really excited,” says Chase of the opportunity. “I’ve been around fishing my entire life, and I’ve looked up to dad as a fisherman, and Dennis Berhorst is my uncle, and my uncle Wayne Fitzpatrick used to fish a lot of tournaments. I’ve got a lot of family that fish. I’ve definitely grown up around fishing and I love it. To be able to fish a tournament like this, I’m pretty excited. I just hope I can put some in the boat.”

Chase is also grateful for the amount of time he’s spent in the boat with his father.

“A lot of people don’t have the opportunity to spend time with their parents, especially their father, for this much time,” says Chase. “To be able to have a hobby you both enjoy and spend that much time together, yesterday we fished for 12 hours, to grow closer together and have fellowship, that’s just an awesome opportunity. God has really blessed us to have the opportunity to spend so much time together doing something we love so much.”

Of course, he’d like to catch a bass or two as well.

“The more I fish, the more I want to do more of it,” says Chase. “I know I’m probably not going to sleep very well tonight.”

The Flaw in the Plan

With more All-American appearances than anyone in the field outside of Lloyd Pickett Jr., Roger would be a natural tournament favorite and could be proceeding with a business-as-usual approach were it not for a poorly timed injury. A few weeks before heading to Douglas to pre-practice, Roger tore something in his left arm.

“I was moving some pallets, just lift and slide at the same time, something I’ve done a hundred times before,” says Roger. “It was like they were bolted to the ground; they didn’t move. When I tore it, it wasn’t a question of if I did something wrong. I knew it was bad.”

Pretty quickly, the specter of not fishing the All-American flashed in front of the 57-year-old pro.

“It’s a tear in my left elbow where the tendon attaches to the bicep,” says Fitzpatrick. “Initially the first doctor thought it was torn completely, but the doc I’m seeing now, the surgeon, he thinks it’s tore partially. I heard it rip when I did it, so I knew it was pretty bad, and it was extremely painful.”

Roger immediately realized he had a serious problem on his hands.

“Right when the injury happened [not fishing] entered my mind,” he says. “I knew it was bad, and I’d heard some stuff about this injury, so I initially thought I’d have to have surgery right away. But, after seeing the surgeon, at that point, not fishing wasn’t an option. It’s stronger than it was when I first got hurt. In the first week or two, I couldn’t even lift a coffee cup up. Now, it’s better, it’s stronger.”

Though he’s somewhat recovered, he’s still going to be a far cry from his usual self. A killer on Lake of the Ozarks, Roger has spent many a tournament putting a bait in tight places with pinpoint casts and muscling kickers out from between docks and cables. That’s not exactly on the table this week.

“When I was here pre-tournament, I switched all my reels to lefthanded reels, because I couldn’t hold a rod with my left hand,” says Roger. “I would get halfway through a cast, and I just had to have Chase reel it in because I couldn’t hold it. It’s not as bad now. I can cast with my right arm and set the hook with my right arm. The issue I’m having is once I get one hooked, it’s keeping the tension on him and reeling him in.”

With a surgery scheduled for the week after he returns from the All-American, Roger will be at far from full strength. Still, he’s now set the stage for a movie-quality comeback if he can win. If not, he’s grateful to have made yet another All-American.

“I’ve been there and had my chances, and I’m going to keep shooting for that top spot,” says Roger. “This could have been so much worse, I’ve been blessed to have made several of these, and you never know when it is your last one. I know how hard it is to make them and I appreciate each one.”