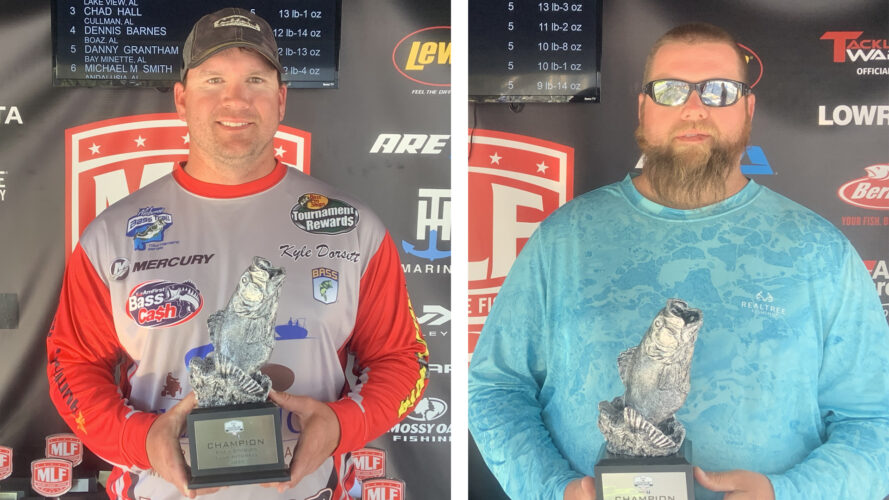 “We had about an hour fog delay, and I really didn’t have any expectations,” Dorsett said. “I had practiced a couple of days, and the sun was out then, but I had never even caught a 3-pounder.

“After the fog delay Saturday, I went to my spot and there were two boats sitting on it, so I just picked up a jig and went fishing,” Dorsett said. “I fished the way I like to fish.”

Dorsett said his bass came on a Dirty Jigs Swim Jig and a Dirty Jigs Scott Canterbury Flippin’ Jig. He said he focused on fishing Lake Mitchell from the boat ramp mid-lake to the Coosa River.

“This win feels awesome,” Dorsett said. “This is my third BFL win, but it’s been a while. It’s just awesome to win against this caliber of fishermen.”

Tyler Smith of Selma, Alabama, had a 4-pound, 6-ounce largemouth that was the heaviest of the event in the Boater Division and earned the day’s Berkley Big Bass Boater award of $645.

Chilcott caught the largest bass in the Co-angler Division, a fish weighing in at 4 pounds, 14 ounces. The catch earned him the day’s Berkley Big Bass Co-angler award of $322.

After two events, Dusty Robinson of Eclectic, Alabama, leads the Bass Fishing League Bama Division Boater Angler of the Year (AOY) race with 487 points, while Mike Langdale of Sycamore, Georgia, and Daniel Buswell, Jr., of Fayetteville, Georgia, are tied for the lead in the Strike King Co-Angler Division AOY race, both with 487 points.