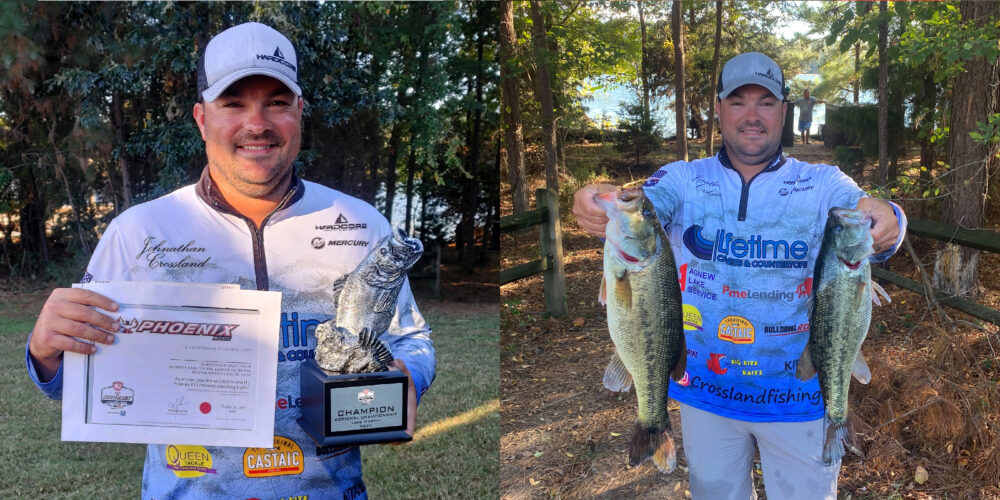 Fishing a Phoenix Bass Fishing League Presented by T-H Marine Regional on your home lake can be a daunting task. Winning one can be an even harder chore. Johnathan Crossland of Chapin, S.C., was up to the challenge and when the dust settled on Lake Murray he closed the door on the biggest win of his career by catching 43 pounds, 12 ounces total to bring home a $61,500 payday.

A quick scroll through the results from Murray will show that fishing wasn’t as solid as it can be. While that wasn’t a total shock to Crossland, he still thought the lake was going to show out considering how prepractice went.

“Leading up to the off-limits the offshore bite was really good,” Crossland said. “I was catching 15 to 18 pounds pretty easily. But come practice, it got really tough as you can see from the results.

“Traditionally, Murray can get tough in October. I think there was some turnover happening in parts of the lake, but also it’s just that transition where they’re moving off the brush towards the bank, following some bait. They’re just in a funk.”

With the fall transition beginning to take shape, the weather also didn’t help things from a fishing standpoint. Heavy rains leading up the Regional had Crossland, along with other competitors, looking for other ways to get bit across the lake.

“One thing that messed the offshore bite up a little bit was that the water came up,” said Crossland. “We got all that rain up north of us and it came down the Saluda River and blew it out for the most part.

“I knew I was going to fish offshore on brush piles and things like that, so I wanted to look for something else. I looked up shallow and I found some grass on some deeper points and the first one I caught was like a 4 and I had four more blowups. The river crested just before the tournament and was starting to fall, so I knew I was going to get one day of trying to catch a few on a frog.”

By the time the tournament got rolling on Day 1, it didn’t take Crossland long to realize the offshore program was going to be the deal for him.

“I had one blow up by 9 o’clock on Day 1 and from there I committed to the offshore thing,” Crossland said. “I ran to a brush pile about 9:30 and it was the first one I stopped on and I got bit, so I knew I was committed.”

Fishing drops, brush and points in around 20 feet of water from Buffalo Creek to the dam for the entirety of the event, Crossland made about 50 stops the first day, but was able to narrow it down a bit over the final two days.

“It took all day to get my limit on the first day,” Crossland said. “I caught my fifth keeper at like 3:15 p.m. on the first day. I was sweating it out. Now, on the second day I had my limit by 12:30. I pulled up to a point and caught like a 3 ¾-pounder, put it in the livewell, stood back up and caught my biggest one right close to 5 pounds four casts later. At that point, I didn’t realize I was going to have 17 pounds when I came in, but I was shaking because I knew I had a good bag.

“On the final day I was nervous because the wind was supposed to blow bad and when it blows that hard for me it doesn’t usually work out well. I didn’t have a keeper by 9:30 and the wind was already starting to blow good. I pulled up to a brush pile and I caught my biggest fish of the final day. From there, I just got in my rotation and had a limit by about 12 o’clock.”

Opting for a topwater to call fish up from their offshore haunts, Crossland put a Castaic Cowboy in his hand all day, every day. He threw it on a 6-foot, 9-inch medium-action Bulldawg Rod spooled with 12-pound Berkley Trilene Big Game.

Winning a tournament of this caliber on his home pond certainly means a lot to the South Carolina boater. It meant even more with his friends and family watching on.

“I lost my father-in-law, Mike Patsolic, on August 17 to COVID,” Crossland said. “So, it’s been almost two months and to know he was looking down and proud and to know he was with me means a lot. But also, my friends and family were there and I had a crowd there rooting me on. It’s hard to put into words what it feels like. It still hasn’t really even set in. It’s a dream come true.”

Of course, Crossland knows you have to give thanks where thanks are due.

“Obviously, I have to thank my lord and savior, Jesus, without him none of this would be possible. And my wife, Shelise, without her having my back I couldn’t be out here. And then Lifetime Cabinets & Countertops, Prime Lending (Bryan Baldwin), Agnew Lake Service, Castaic, Falcon Boats, Mercury Marine, Hardcore Fish & Game, Bulldawg Rods, Reaction Strike, Kitana Hooks, Big Bite Baits, Queen Tackle and Wrapabull.”

Having a good support system is vital to any tournament angler and Crossland is looking forward to representing them all at the All-American next year.

“The All-American is the hardest tournament to qualify for in bass fishing, in my opinion,” said Crossland. “What you have to do to get there and all the locals you have to beat, it’s a dream come true.”