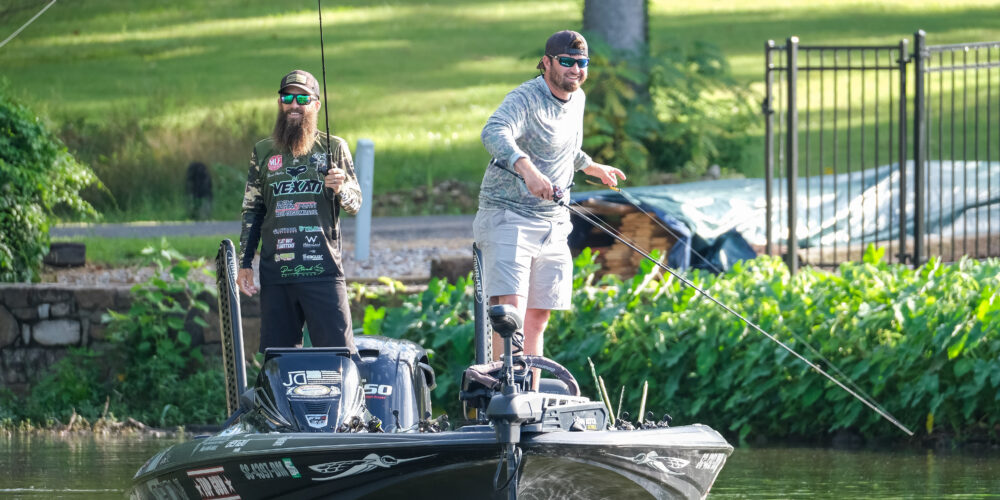 HOT SPRINGS, Ark. – By all accounts, the change from rain and clouds to sunshine worked out for most of the top five boaters on Day 2 of the 39th annual Phoenix Bass Fishing League Presented by T-H Marine All-American on Lake Hamilton. Friday, the 7,000-plus-acre Hamilton fished more like it did during practice for the boaters. Still, each angler had a big decision to make — fish shallow or offshore? The decisions varied, with positive results coming through for each tactic.

Well ahead, Connor Cunningham has mostly fished shallow, but the anglers behind him have a few things going.

Hunter Eubanks was giddy with excitement after weighing his Day 2 limit of 12 pounds, 7 ounces — 9 ounces better than his bag on Thursday. The South Carolina angler said that his day started slow, but ended in a flurry, leaving him with some good feelings about Saturday.

“I only had two fish at about 11 a.m. and I told my co-angler to hold on because we were about to put our butts in gear,” Eubanks said. “I don’t think my batteries have any more life left in them, honestly. I still haven’t hit where I got big bites in practice and I’m still sitting here in second place. I hope that pays off on Saturday.”

Eubanks spent much of his morning near the takeoff ramp at the hatchery before moving off further away from the ramp. However, Eubanks returned to the area at the end of the day to catch one more fish. That one fish gave him a good amount of confidence heading into Day 3.

“I kind of figured a little something out right here by the boat ramp up shallow,” Eubanks said. “If I can get the fish to do what I want them to do, this lake sets up well for what I do well. I’m just covering water and hitting some wood every once in a while.”

Sean Wieda caught a 10-4 limit on Friday, 2-4 less than his Day 1 bag. His weight wasn’t as high as he wanted it to be, mainly because he thought he had more in his livewell than he actually had.

“I stopped going through my main areas today and I kind of backed off because I thought I had more weight than I actually did,” Wieda said. “I tried to leave some for Saturday, but my bite is getting a lot tougher up shallow. I expect I’m going to have to mix in some more offshore brush tomorrow if I want a shot at winning.”

Wieda has been steadily working shallow around boat docks and pockets for the first two days of competition, even through the change in weather. The Kentucky angler says that he was ready for the sun to come out today to help his shallow bite, but started second-guessing that thought once his day got started.

“I thought that I wanted the sun to come out, and I still think I do, but it was definitely tougher for me today,” Wieda said. “The fishing pressure was tougher today for sure. I’m going to mix it up tomorrow and hit some areas I haven’t been to since before pre-practice and see if I can find some new and productive areas.”

Local hammer Brian Bean sits in fourth after bringing in five bass for 10-7. Although he’s only in fourth place, you can feel the frustration in Bean’s voice when he talks about his performance on his home lake.

“I’m struggling out there, I’m not going to lie,” Bean said dejectedly. “I hit my fish pretty hard yesterday with a big Berkley PowerBait Power Worm. Today, I threw a shaky head. It was light line for me today for the most part.”

The double-edged sword that is home lake experience is proving to be true for Bean this week. While he has confidence in what he’s doing — which is working offshore — he finds himself looking to move on rather quickly thanks to prior experience.

“I have so much history on this lake,” Bean said. “I will work out deep and then see a spot where I caught one up shallow one time and go there. I’m just all over the place right now. I’m going to start deep tomorrow on a couple schools of fish, and then if that doesn’t work I’m going to head shallow and try to catch a big one.”

Georgia angler David Lowery sits in fifth after catching a 10-7 bag on Day 2 and an 11-pound bag on Day 1. Lowery arguably has made the furthest run of any angler in the Top 10 this week, working his way down Mazarn Creek. Lowery says that he’s the only one really fishing in that area of the creek, and so far it’s paid off.

“I’m catching my fish in the very, very back pockets of creeks with a SPRO Bronzeye Poppin’ Frog,” Lowery said. “I’m also using a ChatterBait with a Big Bite Baits Cane Thumper on the back and a hand-tied jig. I’m going right back to that creek tomorrow morning.”

Expect Lowery to make another long run up to Mazarn Creek, and he should move even deeper into the creek than he has all week, according to him. Lowery hopes that new water paired with more sunshine is the key to making a massive comeback in his hunt for $120,000.

“The big fish really didn’t start biting until the sun got out and created shade,” Lowery said. “The trees hanging off the banks created shade and I was skipping up underneath them in some shallow and dirtier water. There’s also a lot of bream and shad back there, and neither of those are leaving.”