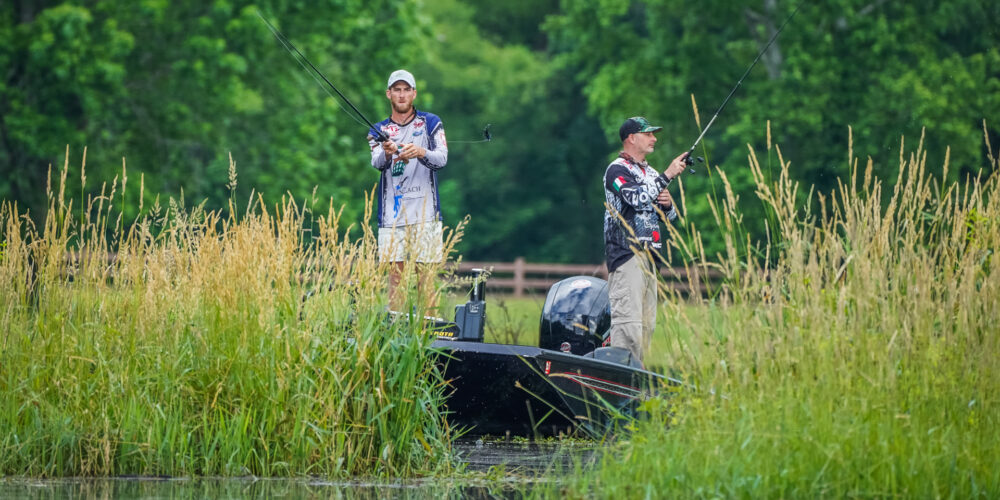 They say that the only constant in life is change, and that certainly rang true on Day 2 of the Phoenix Bass Fishing League Presented by T-H Marine All-American on Douglas Lake. Shifting weather conditions caused many anglers to switch up their strategies in the shuffle to make the Top 10 in this event presented by TINCUP.

Brant Grimm rocked the scale with a 19-pound, 1-ounce limit to jump up to first place. The bright sun and clear skies allowed the local angler to trigger big bites on the offshore schools.

Here’s how the rest of the top five stacked up in their hunt for Championship Saturday.

“I knew things were going to change today,” says Brandenburg.  “I faltered a little bit early, I wasn’t on my bite that started early on Day 1.”

After striking out at his first location, Brandenburg decided to mix things up.

“I went with a different pattern,” he says. “We went all the way to the dam and fished some shaky head stuff for a while. I ended up catching a couple that culled later.”

Not finding the size he needed for a first-place finish, Brandenburg says he went back offshore to what he knows best.

“I just kept going back to what I really knew was going to win this thing. All of a sudden they started biting,” says Brandenburg. “When they start biting it’s not hard to catch ‘em, but I missed a lot of good fish today that I should have had.”

With mere ounces currently separating him from a potential $100,000 payout, Brandenburg is confident in what tomorrow will bring.

“The last hour of the day I went boat-riding, and I found some really good stuff,” Brandenburg adds. “I think I can win it.”

Sunshine in the shallows allowed Blake Tomlin to get off to a fast start, doing what he does best. A topwater frog and swim jig were key to his presentations today.

“The bite was a lot faster this morning, it didn’t last as long but it started earlier, because the sun came out earlier. The shallow fish are waiting for the brightness a little bit and once it starts getting brighter the bite kind of kicks on,” says Tomlin. “I pretty much had what I had around 10 o’clock.”

With an insurance limit in the box, he was able to try some new strategies.

“I got on a topwater bite and actually culled twice late in the day,” says Tomlin. “It’s a blazing-sun, wide-open topwater bite. My biggest cull after this morning was in the blazing sun.”

It wasn’t all blue skies for Tomlin, however. He did miss a key fish that likely would’ve propelled him into first place.

With bright, clear conditions predicted for tomorrow, Tomlin hopes to ride his new topwater pattern to the top of the standings.

An early morning flurry quickly turned to frustration for Cody Hoyle, who still managed to stay in the hunt with a solid Day 2 finish.

“We pulled up in a pocket and had a limit before 8 o’clock,” says Hoyle. “But I lost two 5-pounders first thing this morning, and I had two fish die on me today. I think that penalty is really going to hurt.”

Moving contrary to the general consensus, Hoyle opted to fish offshore during the overcast conditions of Day 1, and to move shallow on Day 2.

“Just call it an instinct,” he says. “We were catching them shallow on a jig today. We caught a lot of fish, and there are more fish up there, I just missed some.”

The changing conditions have left Hoyle scratching his head.

With a championship on the line tomorrow, Hoyle knows that now is no time to hold back.

“I’m going to go with a combo tomorrow, a little bit of everything,” he says. “I think I’ll swing for the fence at this point.”

After successfully firing up a topwater school on Day 1, Roger Fitzpatrick found that the bright sunlight pushed them deep. With class out for the day, he was able to focus on his favorite type of fishing.

“I just went shallow,” says Fitzpatrick.  “I’m fishing shallow cover just like I would back home.”

A recent arm injury has impacted his fishing style, which could turn out to be a blessing in disguise.

“My arm was hurting so bad yesterday on the schools of fish,” says Fitzpatrick. “It was painful reeling them son-of-a-guns in. My injury has made me slow down. I fished painfully slow today; stupid slow, as slow as I can go.”

His slow and steady approach allowed him to push into the top five. Tomorrow, Roger will be joined in the boat by his son Chase, who also landed in fifth place as a Strike King co-angler. Both the father and son duo will be well within striking distance of a win or two on Championship Saturday.