During Bass Pro Tour Berkley Stage Six presented by TrueTimber, many in the 80-angler field attacked the bank at Table Rock Lake, and some even found some late spawning fish. But the eventual winner, Aaron Martens, went against the grain and targeted bass offshore with several different baits.

Martens is known as one of the best in the world with a drop-shot, and he relied on it heavily in winning Stage Six, saying it caught approximately half of the fish he weighed in during the week.

Going Deep For the Win

During the Championship Round, where he totaled 50 bass for 86 pounds, 4 ounces, Martens did much of his damage by fishing for suspended bass over 30 to 60 feet of water.

“Most of the bass were suspended and sitting right on top of trees,” he said, estimating that most were hovering between 5 and 20 feet below the surface. “There’s a 12- to 15-mile stretch on Table Rock with flooded timber, and that’s the area I focused on.”

When fishing a drop-shot rig for these suspended bass, Martens stressed the importance of using his electronics and also using a long leader.

“I would watch my graph and would reel up and drop the bait a lot to get the bait to fall in front of the bass,” he said. “You want to get where the fish are with a controlled fall. You needed to be as close to the top of the tree as you could, and most bass would bite it right when it stopped falling.”

While fishing a drop-shot, he chose a Roboworm FX Sculpin in Aaron’s Magic and Morning Dawn as he said the shape of this bait closely resembled the minnows and shad that the bass were eating.

Besides the drop-shot, Martens also used a spinnerbait and swimbait during the Championship Round. He also mixed in a jig during the week to contribute to his totals.

When fishing a swimbait, he chose a Keitech Easy Shiner in Electric Shad that he paired with a 1/2-ounce Picasso Smart Mouth jighead. He fished it on a 7-6 Enigma Fishing HPT flipping rod with a Shimano Curado DC spooled with 16-pound Sunline FC Sniper fluorocarbon.

“I would cast and let it fall on a tight line to get it down 15 feet or so before starting to bring it back,” he said. The spinnerbait was another key for Martens, and his bait of choice was a 3/8- and 1/2-ounce Picasso Inviz-Wire Pro Double Willow Spinnerbait in the Bling Shad color. He fished the spinnerbait on a 7-3 medium-heavy Engima Fishing HPT rod with a Shimano Metanium MGL reel spooled with 16-pound Sunline FC Sniper fluorocarbon.

“The key was the reel it quickly. The small willow blades on that bait help to let you fish it faster,” said Martens.

More videos from this event

Inside Access: McClelland and Lintner Wanted a Second Shot at Table Rock 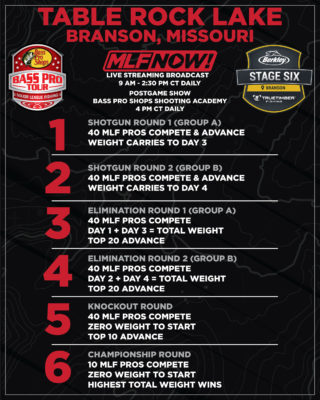