Capdeboscq and Acosta on top with 26-5 in two days 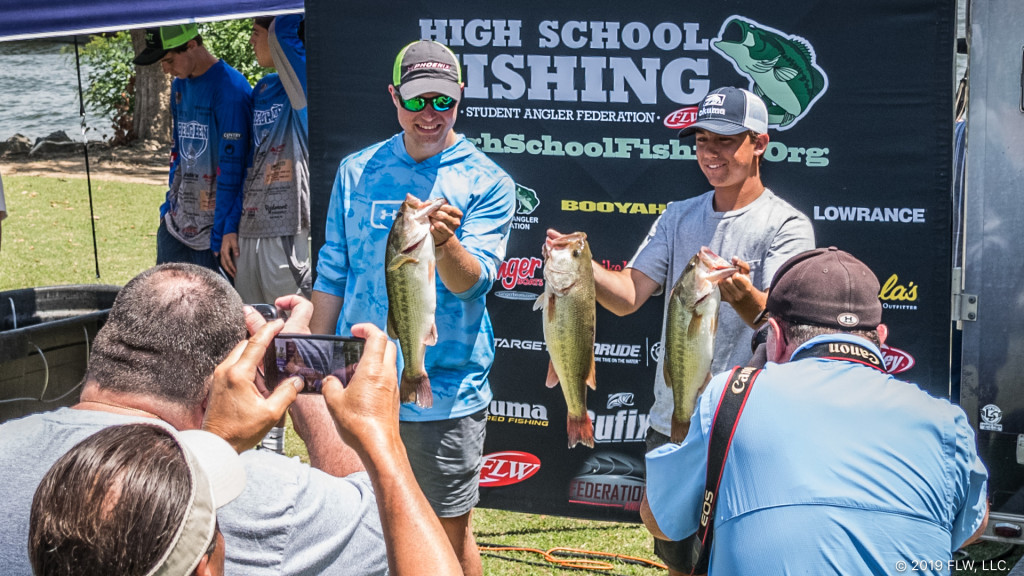 Turning in one of the most consistent performances thus far, Christopher Capdeboscq and Sam Acosta of Northlake Christian High School added 12 pounds, 14 ounces to their day-one limit of 13-7 for a 26-5 total weight that put them in the lead going into the final day of the High School Fishing National Championship on Pickwick Lake. This event is being held in conjunction with the High School Fishing World Finals presented by The Bass Federation and FLW.

Improving from third place on day one, Capdeboscq and Acosta focused mostly on the offshore ledge fishing. They had plenty of company, but chose to focus only on the factors they could influence.

“We just put our heads down and tried to not worry about the other boats out there,” Capdeboscq says. “We tried to find places that were less pressured and get the fish fired up quick so we could get as many good bites as we could and then get out of there because we didn’t want to beat them up; we’re trying to save fish.”

Essential to his team’s success, Acosta says, was constant attention to precision presentations.

“If the boat’s not in the right spot, you’re not going to be pulling on the schools effectively,” he says. “The fish are really picky out here, but if you put the boat in the right spot and cast in the right places, you can definitely land into some good ones and get them feeding.

“We fished our offshore spots early and in the afternoon. If the fish are there, they’re willing to bite.”

The only real challenge the leaders faced was accessing key spots.

“Yesterday, the first six schools we pulled up to had boats on them, so we had to dig deep in there,” Capdeboscq says. “Today, we had to bounce between six to 10 schools and just hit ’em here and there.”

The leaders also caught fish along shorelines with a mix of rock and wood. In both scenarios, they used a mix of reaction baits and slower presentations.

“This is one of the best junk-fishing lakes around,” Capdeboscq says. “Everything we’d throw, they’d eat; so we just tried to mix it up.” 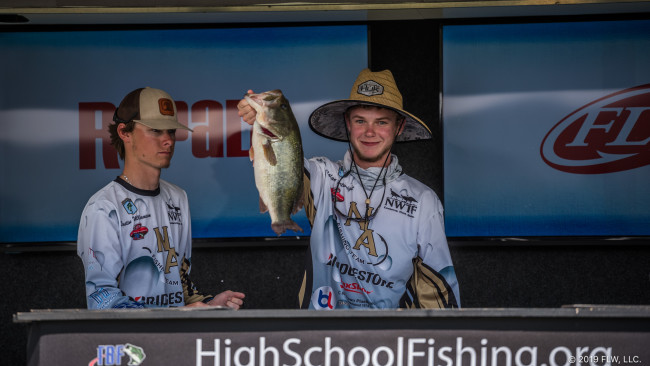 Williamson and Boatwright get creative for second

Asked if they used slow presentations or reaction, Nathan Boatwright and Dustin Williamson of North Augusta High School said they kind of did both at once. Doing so enabled the anglers to improve two spots with a 25-8 total.

“We used slower baits, but we used them in a way to get a reaction bite,” Boatwright says. “It’s a new technique we’ve never done. It’s something new we tried, and it’s clearly working.

“You just have to give that bait more action and find ways of making it look as natural as possible. Sometimes, the bigger fish really aren’t that active; they want something that’s right there in their face with a little action, but not much.”

Williamson says he and Boatwright targeted depths of 17 to 25 feet and looked for river -channel bends, sharp drop-offs or the tips of points facing into the current.

In third place, Colin McCullough and Justin Hamlin of Cedar Bluff High School made a big move on day two by improving from a three-way tie for 46th place on day one. Adding 16-2 to their first-round weight of 9-1 gave them a 25-3 total.

The fourth-place team of Sara Morehead and Hunter Valerius gained eight notches today by catching a second-round limit that went 13-6 and pushed their total to 24-10.

J.D. Bedford and Walker Brown of Alabama’s Lawrence County High School, who led day one, slipped to fifth with 23-9. 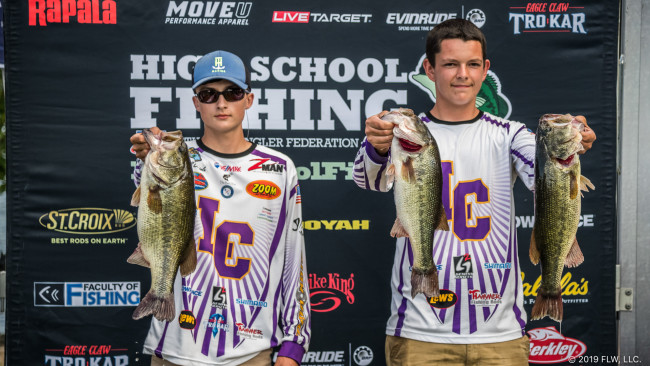 Slowing down puts Daniels and Suratt atop World Finals

After a solid day-one performance in which their 14-3 limit put them in second place in the High School Fishing World Finals, Will Daniels and Kade Suratt stepped on the gas with a day-two limit that weighed 15-12 and pushed them into the top spot with 29-15. Leading the field by a margin of 3-4, the anglers enjoyed a late-day rally that allowed them to make two key culls that significantly boosted their total.

“I feel like, as it got hotter in the afternoon and the current increased, the bite kicked in,” Suratt says. “Also, as we saw the shad gathering in the current, we tried moving baits, but couldn’t get bit, so we slowed it down in those big balls of bait and that worked.”

The key bait was a Strike King Bullworm on a magnum shaky head. This rig yielded their biggest fish – a 5 1/2-pounder – at around 9:30 out of a big laydown.

“We just had to work it as slowly as we could. If we worked it fast, they wouldn’t eat it,” Suratt says. “If you bumped it over a log, you’d probably get a bite.” 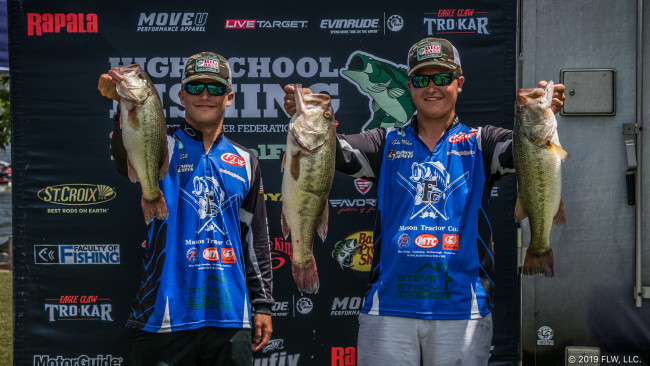 In second place, Fannin County High School’s Blake Cobb and Luke McHan caught a 15-pound limit that enabled them to gain 16 spots from 18th place with a total of 26-11. Anchoring their bag was 6-pound, 9-ounce largemouth that rewarded their patience.

“There had been someone on our spot fishing swimbaits, but we pulled on to the spot once they left, and on my first cast I caught that big fish around 9 o’clock,” McHan says. “That was a big motivation.”

Cobb says his team could never generate a consistent bite and, instead, had to diligently pick one here and one there.

“We had to get right on the spot and throw 100 casts,” he says. “When they’d get fired up, we were good. It’s a waiting game. They never really heated up, but the bites we got were the right ones. 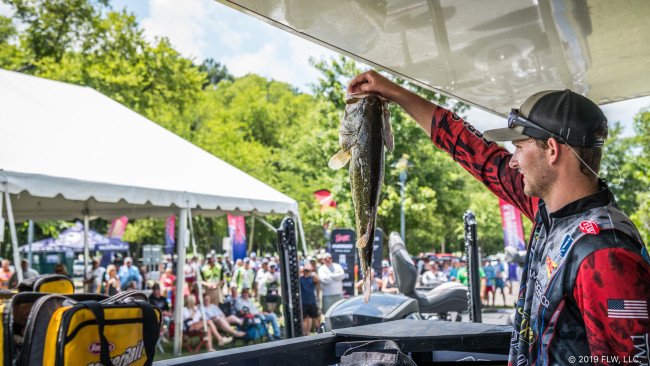 Pickwick turned up several quality fish in the 5- to 6-pound range, including a 6-10 caught by East Beauregard’s Dylan Guillory and Hayden Farmer that was tops for the National Championship field. However, the biggest fish of the week weighed 7-10 and fell for a soft plastic fished by Cory Elks, who fishes with Drake Hamilton on the Obion Central team.

“I cast my bait into deep water, worked it a couple of times and thought I was hung on a log or a rock because it wasn’t moving,” Elks recalls. “About the time I was popping the line, trying to get it loose, the line shot across the water, and I knew I had a fish on, but I didn’t know how big yet.

“I fought that sucker for about four minutes. He had my rod bent completely under the boat. We were spinning the boat and trying to get him out from underneath. It was a fight.”

Jerry Brumbaugh of Central High School also broke the 7-pound mark with a 7-4.

All participants are automatically entered in the World Finals’ invitational format, while National Championship competitors qualified through SAF-sanctioned events. After two days of full-field competition for both events, the National Championship field is cut to the top 10 for day three, which is the final round of that tournament. The winner is determined by heaviest three-day cumulative weight on Friday.

Each member of the winning team receives a $5,000 scholarship to the school of his or her choice, or a four-year $40,000 scholarship to Kentucky Christian University. All 10 finalists automatically advance to Saturday’s final round of the World Finals.

Teams are also competing for more than $2 million in scholarships and prizes at the World Finals.

The World Finals field is cut after two days to the top two teams from each state. Those anglers compete on Friday (when weights are zeroed) in the semi-final round.

Any teams that missed the cut in the National Championship or World Finals will compete on Friday in a separate second-chance round for a shot at making it back into the World Finals competition on Saturday.

Saturday’s field will consist of the 10 National Championship finalists, the top 10 teams from Friday’s semi-final round, and the next 10 teams (highest day-three weight) from the semi-final round and second-chance rounds combined. A Friday night party will include a Lucky Dog Last Chance Wildcard drawing for one team, not already qualified, to compete on day four – bringing the total to 31 teams. Weights are zeroed on the last day, and the World Finals winners are determined by the heaviest catch.