Northlake Christian Wins By An Ounce 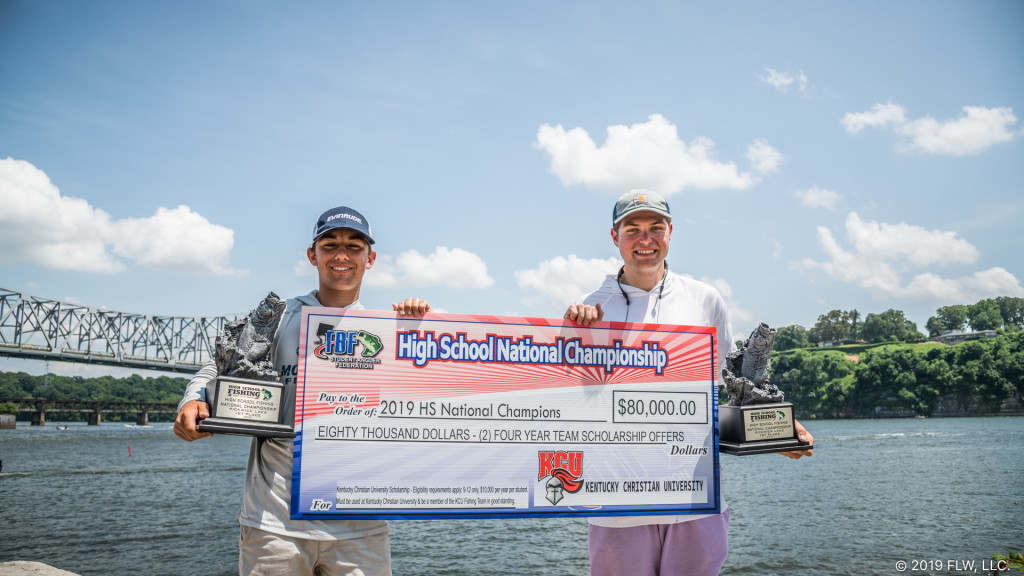 Northlake Christian High School’s Christopher Capdeboscq and Sam Acosta weighed 9 pounds, 7 ounces (three fish) on the final day to win the High School Fishing National Championship on Pickwick Lake. With a three-day total weight of 35-12, Capdeboscq and Acosta had just a 1-ounce margin over the second-place team of Colin McCullough and Justin Hamlin who tallied 35-11 for Cedar Bluff High School. For the win, each angler won a four-year $40,000 scholarship to Kentucky Christian University. 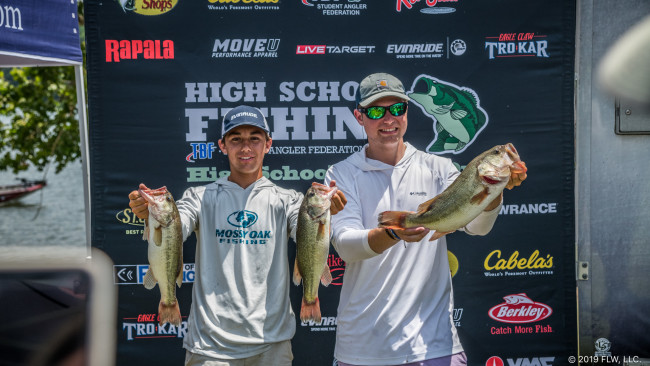 When asked for a one-word reflection of their accomplishment, Capdeboscq says “blessed,” while Acosta utters “shocked.”

“The past two days, we’ve caught good fish, but we’ve been saving fish the whole time,” Acosta says. “We would catch a good fish on a spot and we’d leave really quick, hoping that we’d have fish for this last day.

“Today, went to our same spots and nobody was on them at first, but the big ones weren’t there. We caught plenty of small ones, but none of those big, big girls we were looking for.”

Capdeboscq says the day’s mostly calm, sunny conditions were less favorable than the previous two days’ cloudy skies and moderate winds. Developing options for both scenarios, he says, was essential to his team’s success.

“We had a really good 1-2 punch going this week, which was good for whether the bite was on fire or it was slow,” Capdeboscq says. “Sam was dragging a 3/4-ounce Strike King Jointed Structure Head with a Zoom Magnum Trick Worm and I was deep cranking with a 6th Sense Cloud 9 C20 in sexified shad.

“The crankbait would get them fired up when they were feeling it and it would catch all the big ones; but a day like today, it was tough to buy a bite on the crankbait. I was lucky enough to catch one 4 1/2-pounder on it today.”

Capdeboscq says that using lighter line — 12-pound-test Seaguar Tatsu fluorocarbon — was key to getting his crankbait to maximum depth and keeping it in the strike zone.

The pair also tried to fish offshore areas with a bit less pressure.

“Everybody’s fishing ledges this time of year, so we just tried to find stuff that got less pressure,” says Capdeboscq. “Creek intersections, main river ledges. I’ve never practiced so hard for a tournament, but we found enough stuff to get us by and that’s what we did.” 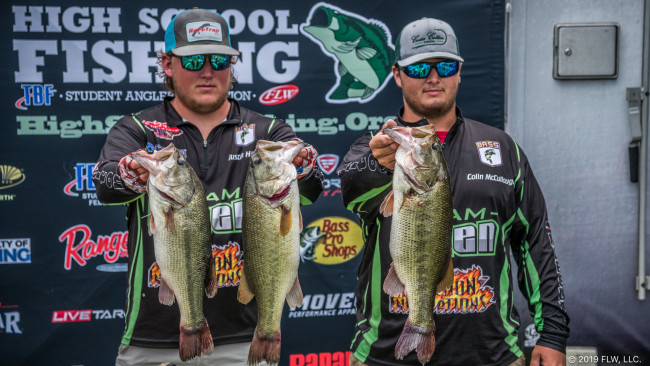 McCullough and Hamlin’s was an impressive comeback story that nearly went all the way. After day one found them in a three-way tie for 46th place, the Cedar Bluff High School anglers roared back on day two with 16-2 — the National Championship’s heaviest single day catch. Adding 10-8 in the final round brought them within an ounce of winning.

“It didn’t work out today,” Hamlin says. “We caught all we could catch; that’s all we can do.”

After catching a few big fish on the top end of Kroger Island, McCullough and Hamlin committed their entire tournament to the area. They specifically targeted a ditch running through the island’s rocky outskirts and caught their fish on a 12-inch worm and a Tight Line jig with a Reaction Innovations Man Bear Pig trailer. Profound Outdoors Z-Boss 20 and 22 crankbaits in chartreuse shad also produced fish earlier in the week.

As Hamlin explains, the shad moving along the island perimeter would eventually make their way into their ditch, but when weak current prevented that from happening today, the big fish were less concentrated. This meant fewer opportunities and a more scattered bite.

“It just never happened today; we just caught an occasional 3-pounder here, a 3-pounder there and a 3 1/2,” Hamlin says. “The big fish never pulled up with the shad and when they were out in the middle schooling up on that shad, we couldn’t find a way to catch them.” 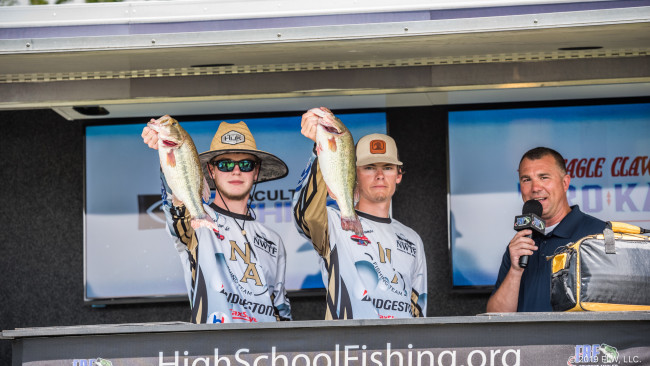 3. Williamson and Boatwright mine one spot

Nathan Boatwright and Dustin Williamson of North Augusta High School wasted no time in locking up a limit this morning and, although upgrades eluded them all day, their early catch of 9-13 added to their previous days’ weights of 13-0 and 12-8 brought them within 7 ounces of the top spot with a third-place total of 35-5.

“We caught all of our fish on a spot in front of Kroger Island,” Boatwright says. “We were really hoping to get rid of a 2-pounder, but we couldn’t. If we could have done that we definitely would have taken the lead.”

Boatwright describes the spot they fished as a big rock pile where bass lay in current breaks. The spot had plenty of fish, but not all are the ones you want.

“You have to pick through the small ones to find a big one and that didn’t happen today,” he says.

The anglers caught most of their fish on a Zoom Magnum Trick Worm in red plum color rigged on a 1/2-ounce wobble head. A steady winding retrieve with bottom awareness was key to their success.

“If we’d feel a big rock, we’d pop it over it and let it sit for a little bit,” Williamson says. “When you’d get back to winding, they’d either knock slack in it or it would be like a crankbait bite and they’d just load up.” 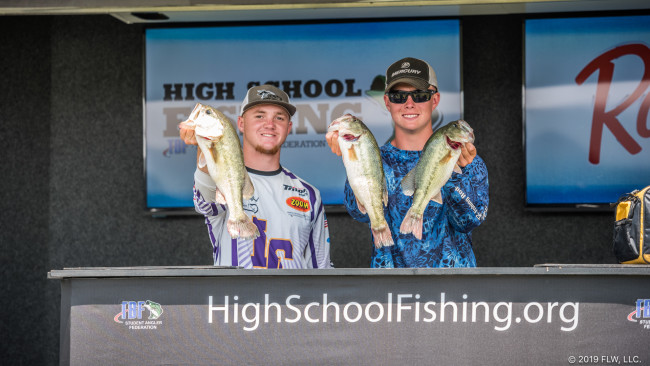 They set the early mark by leading day one with 13-12, but after struggling on days two and three with weights of 9-13 and 9-14, J.D. Bedford and Walker Brown of Lawrence County High School settled in fourth place with 33-7.

“Our day was absolutely terrible,” Bedford says of a heartbreaking final round. “We pulled up to our spot, caught 7-8 pounds in the first 10 casts and around 8:15 we broke off a 6-pounder about 10 yards from the boat.

“We went to another spot and about 10 o’clock, we broke off one about 6 1/2 pounds right next to the boat. So, we lost two that probably would have pushed us up there pretty good. But it’s fishing — you gotta learn how to lose.”

“We noticed it was dead calm in the morning and we knew we had to make an adjustment,” Brown says. “It worked, but we just couldn’t get ‘em in the boat.” 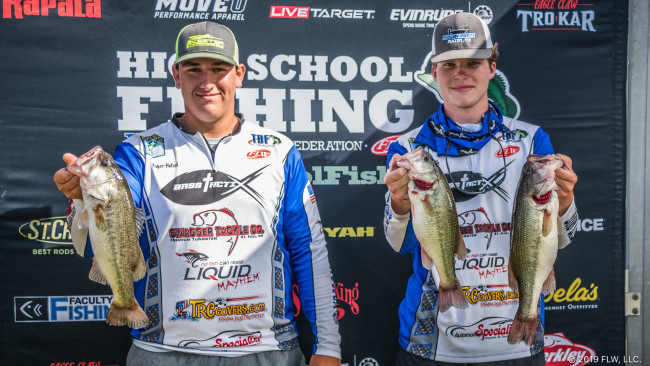 5. Smith and Hutzel fall to fifth

Dalton Smith and Hayze Hutzel of Northwest Rankin High School placed second on day one with a limit of 13-9 that buoyed their performance. Days two and three yielded smaller limits of 9-5 and 9-13, which yielded a fifth-place total of 32-11.

“We just went looking for big fish today because we were behind by almost 3 1/2 pounds,” Smith says. “We went go-big-or-go-home. We caught two good ones early and then it slowed way down. Our fish scattered out; they weren’t set up right. We just happen to get a barely legal fish with 15 minutes of fishing left to fill out a limit.”

Smith and Hutzel caught their fish in 25 feet of water on 1-ounce shaky heads with big worms. The anglers experienced a flurry around 7 o’clock, which produced five fish, including their two biggest. 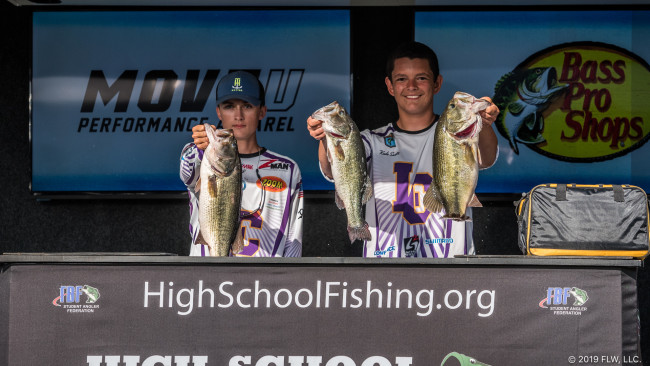 The National Championship was held in conjunction with the 10th Annual High School Fishing World Finals presented by The Bass Federation and FLW. The latter event concludes tomorrow with a final field of 31 teams, which includes the 10 National Championship finalists, the top 10 teams from Friday’s semi-final round, and the next 10 teams (highest day-three weight) from the semi-final round and second-chance rounds combined. A Friday night pizza party will include a Lucky Dog Last Chance Wildcard drawing for one team, not already qualified, to compete on Saturday.

Weights are zeroed on the last day, and the World Finals winners are determined by the heaviest catch. Teams are also competing for over a million dollars in scholarships and prizes at the World Finals. Top boat captains will receive merchandise prizes such as fish finders and trolling motors.

Leading the pack are Lawrence County High School’s Will Daniels and Kade Suratt, whose third day limit of 17-1 stands as the heaviest catch from both events.

The World Finals weigh-in will be broadcast live starting at 1:30 p.m. CT at HighSchoolFishing.org.