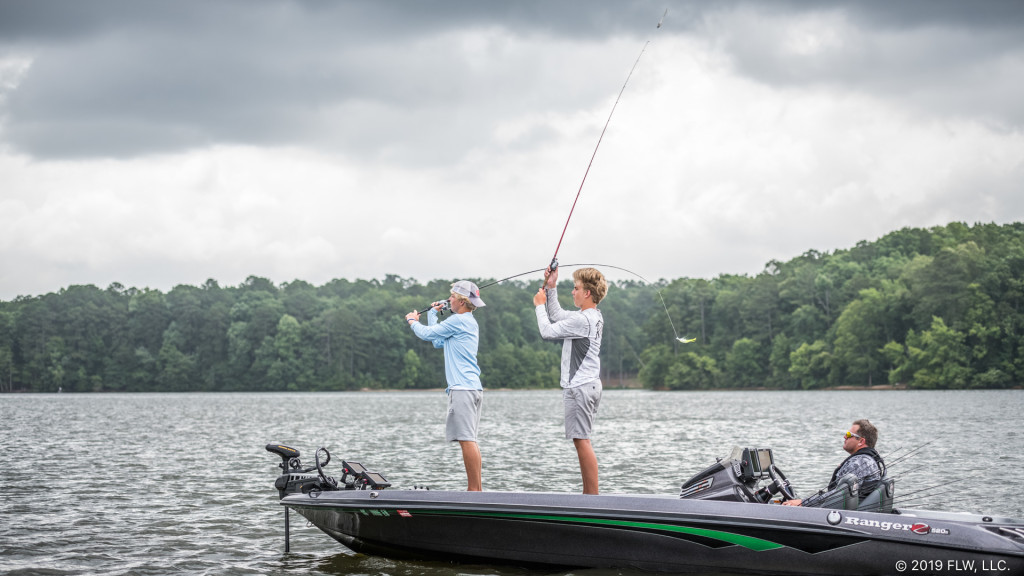 Pickwick is big lake, but even this 53-mile long TVA reservoir gets weary and the first half of the day told a tale of occasional opportunity, but a lot of waiting and hoping as 31 teams competed in the final day of the 10th annual High School Fishing World Finals.

Presented by The Bass Federation and FLW, this four-day event was held in conjunction with the High School Fishing National Championship, which concluded yesterday. Northlake Christian High School’s Christopher Capdeboscq and Sam Acosta won that event with a three-day total of 35 pounds, 12 ounces.

Today, we found Lawrence County High School’s Will Daniels and Kade Suratt, whose limit of 17-1 pushed them to the top of the World Finals standings. Weights were zeroed, but Daniels and Surat looked determined to race across the finish line, as they caught their first keeper 5 minutes after reaching their first spot and were culling within 20 minutes.

Sounds good, right? It is, compared to most of their competitors, but when we revisited Daniels and Suratt around 11:30, they reported a frustrating downturn. They had upgraded to about 12 pounds, but were still waiting for a couple of big bites that could match yesterday’s weight.

Past this performance, we didn’t find anyone else with double-digit catches. It’s likely that the heavy fishing pressure of 389 teams competing for three prior days has the fish scattered, sore-lipped and on high alert. Moreover, the mostly cloudy conditions are keeping fish from grouping tightly on offshore structure, as well as shallow targets. And, as has been the challenge most of the week, light current has the fish in a less aggressive mood.

In particular, Colin McCullough and Justin Hamlin, who finished one ounce behind Capdeboscq and Acosta in the National Championship, returned to the rocky flats and shallow ditch on the top end of Kroger Island where they caught all of their fish this week. Actively rotating through big worms, jigs, crankbaits, slab spoons and a drop-shot had produced only two keepers by late morning.

Elsewhere, Maddux Walters and Hayden Gaddis of the North Georgia Anglers had an 8-pound limit, while Dalton Smith and Hayze Hutzel of Northwest Rankin (fifth in the National Championship) were also struggling after finding a local on their juice.

Weigh-in starts at 1:30 p.m. CT and can be watched live at HighSchoolFishing.org.