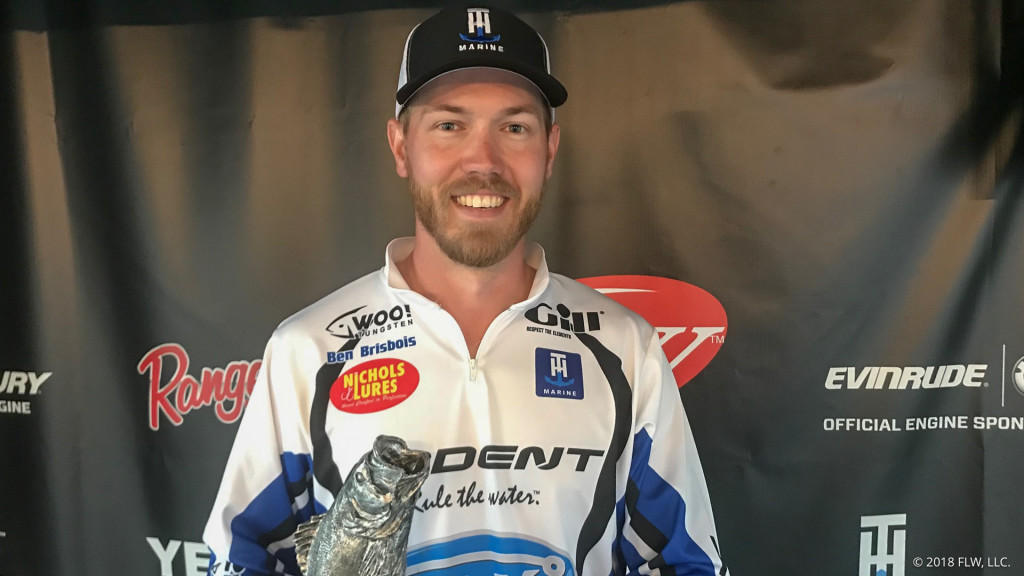 “Lanier is my home lake, and I knew that my best bet was to target spotted bass, so that’s what I did,” said Brisbois, who was fishing in his first career event as a boater in FLW competition. “I made a 20 to 25 minute run to the south end of the lake and I stayed there all day.

“I started off throwing a crankbait, but to no avail,” Brisbois continued. “Around 9 a.m. we weren’t getting any action so we moved to the backs of some pockets. I caught a couple of fish on a shaky-head rig, then the wind started blowing around 10 a.m. I knew that I had to get back out offshore, so we moved back out and I was able to put some keepers in the boat.”

Brisbois said he caught around a dozen fish throughout the day on an Ike’s Penguin-colored Rapala DT10 crankbait and an electric shad-colored Spot Sticker worm on a Spot Sticker shaky-head rig.

“The key was definitely moving back out when the wind started blowing,” Brisbois said. “They wouldn’t touch the crankbait earlier in the day, but when the wind picked up, in the exact same spots, we caught them.”

Brisbois limit was anchored by a 6-pound, 3-ounce spotted bass that he caught on the crankbait – his personal best.

“I was fishing a 7-foot, medium-heavy ALX IKOS Hustler rod with my crankbait and it made a huge difference,” Brisbois went on to say. “It’s designed for fishing mid-depth crankbaits and was a perfect set up for the DT10. The rod has enough tip where you’re not going to pull the hooks right out of their mouths, but enough backbone to crank 5- and 6-pounders in.”

Piacentine caught a largemouth weighing 8 pounds, 8 ounces – the heaviest of the event in the Boater Division – and earned the day’s Boater Big Bass award of $855.

The top 45 boaters and co-anglers in the region based on point standings, along with the five winners in each qualifying event, will be entered in the Oct. 11-13 BFL Regional Championship on the St. John’s River in Palatka, Florida. Boaters will compete for a top award of a Ranger Z518C with a 200-horsepower Evinrude outboard and $20,000, while co-anglers will fish for a new Ranger Z518C with a 200-horsepower Evinrude outboard.