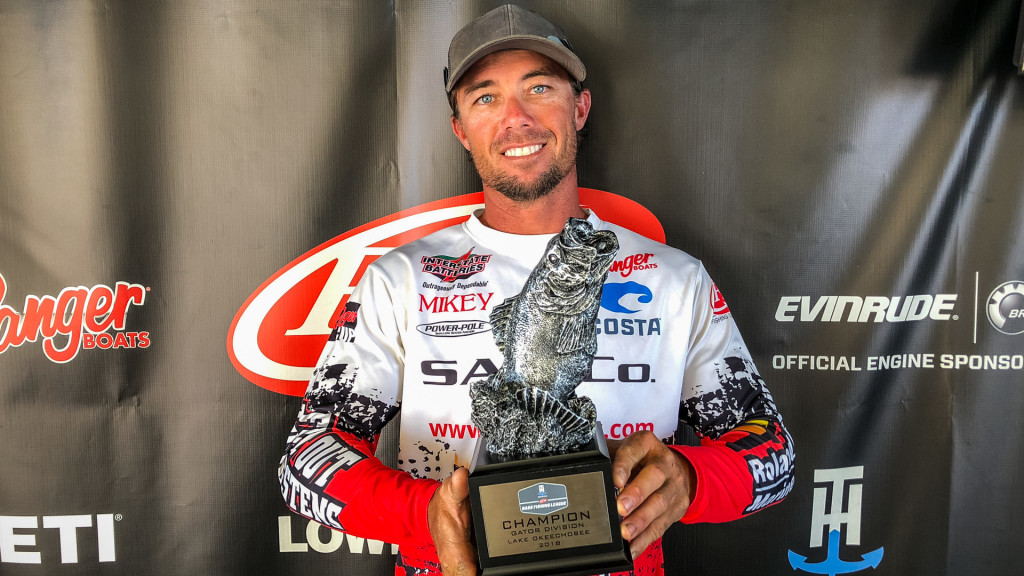 Keyso spent his day fishing south of the Monkey Box targeting postspawn bass in dollarweed pads. He said he rotated between two areas, and used a Texas-rigged Junebug-colored Reaction Innovations Skinny Dipper with 3/8- and ¼-ounce weights to catch his fish.

“There was a new moon and most people focused on spawning bass,” said Keyso, who earned his second career win on Lake Okeechobee in BFL competition. “A wave of bluegill were also spawning, so I Power-Poled down and just slow-rolled my bait through the pads.”

The Florida angler said he used a Fitzgerald Fishing Bryan Thrift Series Frog Rod with 50-pound-test braid line, and estimated that he caught 45 keepers throughout the tournament.

“The water had to be a little dirty. The big ones committed to the bait in dirty water,” said Keyso. “And when they committed, they just destroyed it. It was a fun bite.”

Blevins weighed a 7-pound, 14-ounce bass – the heaviest of the event in the Boater Division – and earned the day’s Boater Big Bass award of $640.

Barber caught the largest bass in the Co-angler Division weighing in at 9 pounds, 10 ounces. The catch earned him the day’s Co-angler Big Bass award of $320.