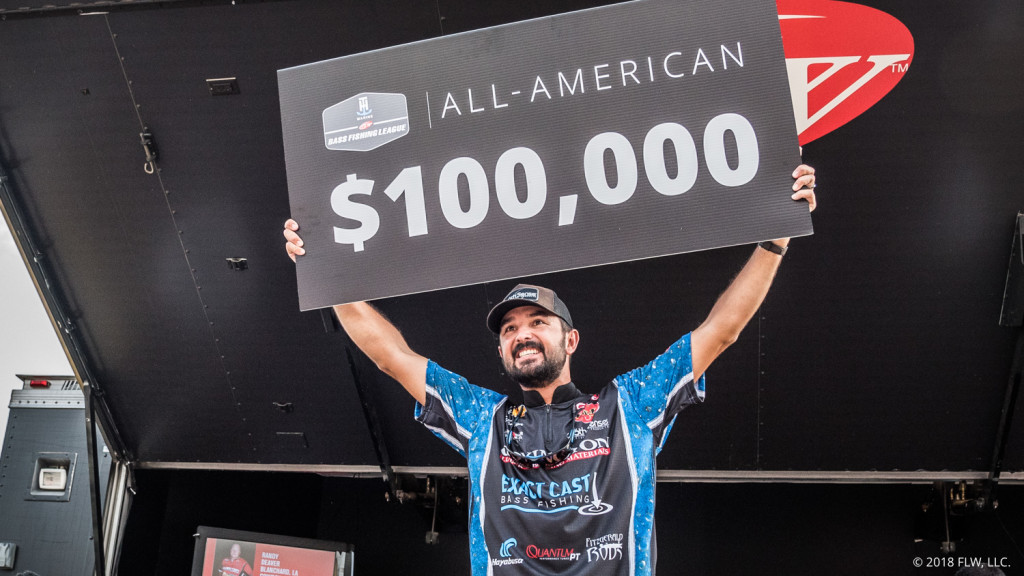 “To win this caliber of tournament right here at home means everything to me, my family, my career and my sponsors,” said LeBrun, who earned his third career win in FLW competition. “Fishing in an event like the Forrest Wood Cup is something I’ve dreamed about since I competed in my first club tournament. I’m truly humbled and blessed.”

Lebrun’s go-to pattern this week involved fishing cypress trees and duck blinds on the western end of the lake. He focused on trees in various bayous, and relied heavily on a 6th Sense Movement 80X crankbait on a 7-foot Fitzgerald Rods Bryan Thrift cranking rod with 17-pound-test Bass Pro Shops XPS fluorocarbon line, as well as a V&M flipping jig with a V&M Flat Wild trailer. LeBrun also used a Spro popping frog to catch a couple of key fish up shallow on Day Two to complete a limit.

“The 80x was my main bait this week and is what produced the majority of my 26-pound limit on Day One,” said LeBrun. “It’s a deal where it catches 3-plus pound fish, but not a lot of them. Today, I caught four out of the five I weighed in on it.”

LeBrun used a methodical approach to picking apart his cover this week, taking advantage of his bait’s abilities to lure fish.

“Basically one was a moving bait and one was a pitching bait,” said LeBrun. “Whenever I was somewhere I couldn’t throw the crankbait, like a certain tree where the limbs were too low or too long, that’s when I would pick up the jig as a little insurance. Every time I fished a duck blind, I’d parallel the edges with the 80X, but before I’d leave, I’d pick up the V&M jig to kind of probe and throw up in the blind and in places you have to beg one to bite.”

LeBrun’s win was especially emotional for him and his family Saturday. Earlier this week, Lebrun shared that he lost his father,
Billy LeBrun, in February, and that he dedicated an 8-pound kicker to him on the water. Today, the Louisiana boater said he experienced another moment that told him it would be a special day.

“When we were at the takeoff ramp, I was pacing around the dock before getting in the boat, and there was some music playing over the loud speakers. A song called “Small Town Southern Man” by Alan Jackson came on, and it’s one of the songs my family and I remember my Dad with. It’s been tough this year, but when I heard that, I felt like he stepped in the boat with me. It’s something that’s just hard to explain.”

A complete list of results is posted at FLWFishing.com.

Matthew Bouldin of Smithville, Tennessee, won the Co-angler Division and $50,000 Saturday with a three-day total of 15 bass weighing 39 pounds, 5 ounces, followed by Jesse Parks of Avondale, Arizona, in second place with 13 bass weighing 39-1.

Hosted by the Shreveport-Bossier Sports Commission, the BFL All-American featured 98 of the best boaters and co-anglers from across the 24-division T-H Marine BFL circuit casting for cash prizes of up to $120,000 in the Boater Division and $60,000 in the Co-angler Division, plus an invitation to compete for bass fishing’s most coveted prize – the Forrest Wood Cup – held Aug. 10-12 on Lake Ouachita in Hot Springs, Arkansas.

Television coverage of the 2018 T-H Marine BFL All-American at Cross Lake will premiere in high-definition (HD) on NBC Sports Network (NBCSN) Aug. 1 from Noon to 1 p.m. EDT. The Emmy-nominated "FLW" television show airs on NBCSN, the Pursuit Channel and the World Fishing Network and is broadcast to more than 564 million households worldwide, making it the most widely distributed weekly outdoors-sports television show in the world.