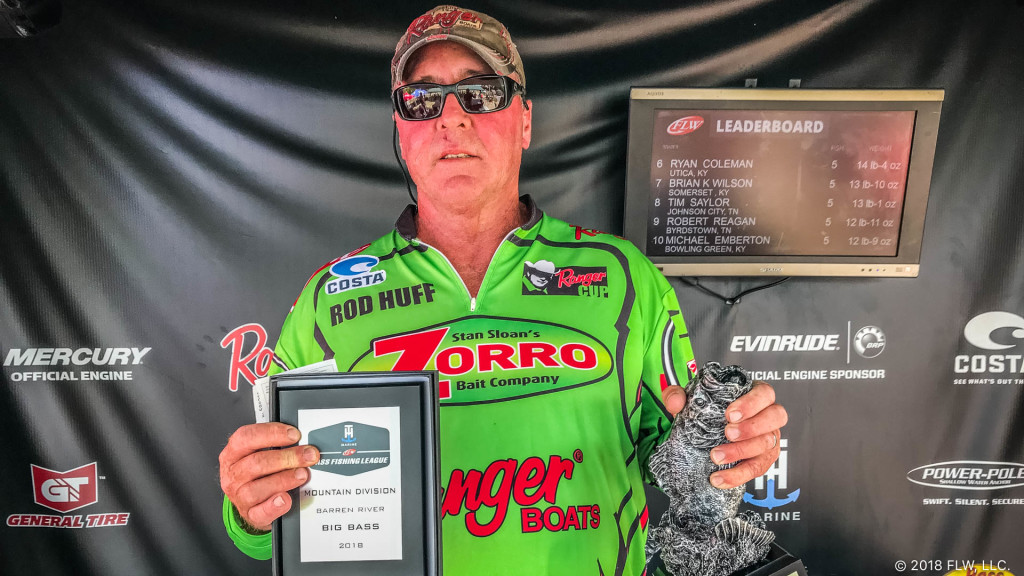 Huff said he mainly fished rock and wood and caught his fish shallow, in less than 5 feet of water. He said his day was split between four areas, spanning from up the main river, to both Peter and Beaver creeks.

“Early on in the morning I caught my biggest using a (green-pumpkin) ChatterBait with a (Zoom) Z-Craw of the same color up the main river, around the wood and rock,” said Huff, who earned his second career win in BFL competition. “I ran the bait over a small laydown and put it in the boat.”

Huff’s fish – a 5-pound, 8-ouncer – was the heaviest of the event. He also weighed in two on a Texas-rigged green-pumpkin Zoom Z-Craw and the rest on a white 3/8-ounce custom buzzbait.

“My other big bite came between 12 and 1 o’clock flipping the Z-Craw in Peter Creek,” said Huff. “I basically covered water with the ChatterBait and buzzbait, and if I came to a treetop or something like that I’d flip it.”

Huff said he ended up catching around seven keepers over the course of his day.

“The key for me was hitting the areas at the right time. There wasn’t a lot of pressure up shallow. I actually thought the tournament would be won offshore. That, along with my two big bites, was what sealed the deal for me.”

Robbie Welsh of Berea, Kentucky, caught the largest bass in the Co-angler Division weighing in at 4 pounds, 15 ounces. The catch earned him the day’s Co-angler Big Bass award of $127.