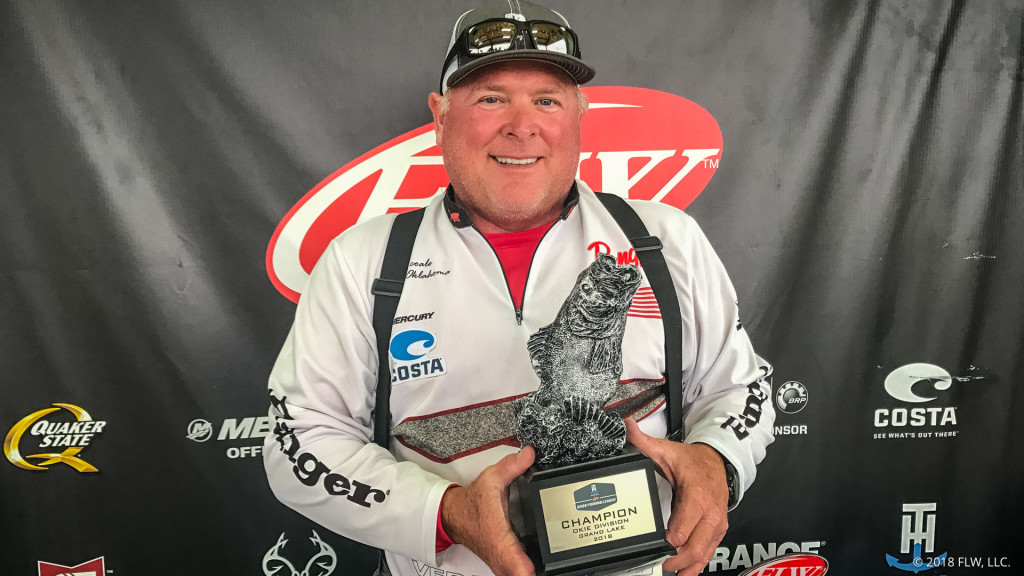 Coale said he had a lot of success in practice with Spro Mike McClelland RkCrawler 55 and MD 55 crankbaits in Green Craw and Red Crawfish colors, but ended up casting something completely new on Saturday.

“I caught a huge alligator gar with the crankbait and broke it off,” said Coale, who earned his first win in FLW competition. “I reached down and grabbed a shaky-head rig and caught a keeper a couple of casts later. I rotated in another worm, but didn’t get a bite. I went back to the shaky-head and caught a 4-pounder and basically never put it down.”

Coale said he used Zoom Trick Worms on 5/16- and ½-ounce green-pumpkin-colored Buckeye Lures Magnum Series Spot Remover heads. He rotated through a couple of colors including green-pumpkin and Tilapia Magic, which he dipped in chartreuse, and Plum Apple.

“I started fishing south of Sailboat Bridge Saturday,” said Coale. “I fished the tips of main-lake points and bluff ends all the way to the back of Horse Creek, where I caught a key 4-pounder around 1:30 p.m. On my way back to takeoff I did the exact same thing but only at spots I’d caught fish at.”

“On Sunday I had eight rods on the deck and they all had shaky-head rigs on them,” continued Coale. “I fished a bit more down the banks of the points and bluff ends than I did Saturday and it paid off. I got a couple of key 3-pounders fishing 40 yards away from the points in spots that I hadn’t fished.”

Coale used G. Loomis Heavy and Medium-Heavy NRX Casting rods, 12-, 15- and 17-pound-test Seaguar AbrasX line and Lew’s reels. He attributed his win to a couple of different factors – first, that the dock and brush pile bite was off, and second, how well his MinnKota Ultrex trolling motor handled the wind and waves.

“My MinnKota Ultrex was key. I had to fish in the wind Saturday and most of the day Sunday and Spot Lock kept me stationary,” said Coale. “I could take my foot off of it and land a fish when I needed to.”

Shonn Goodwin of Moore, Oklahoma, caught a bass weighing 5 pounds, 1 ounce – the heaviest of the event in the Boater Division. The catch earned him the Boater Big Bass award of $975.

McGlothlin caught the largest bass in the Co-angler Division – a fish weighing 5 pounds, 12 ounces – and earned the Co-angler Big Bass award of $487.