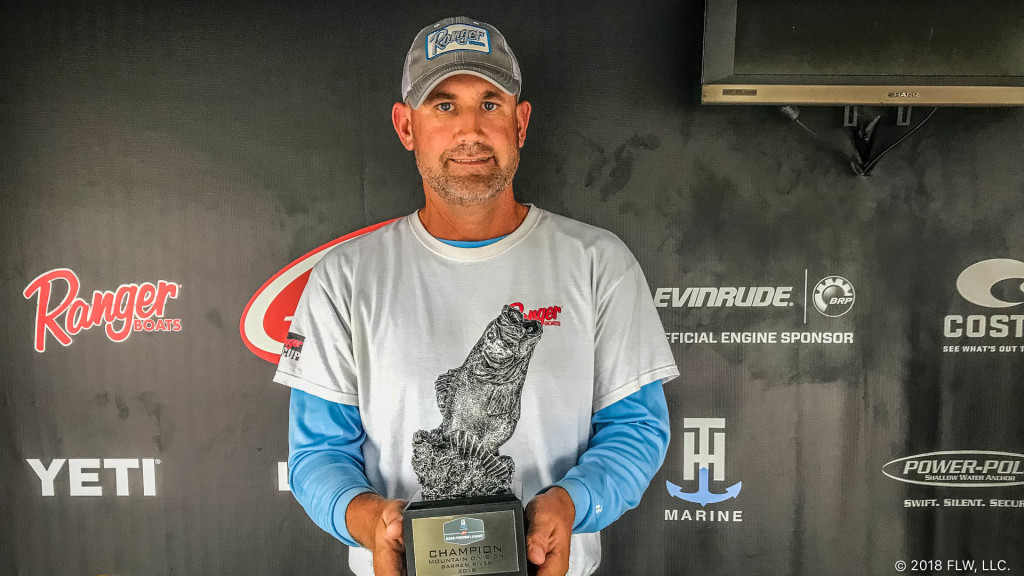 Reagan said he caught most of the fish he weighed on a homemade football-head jig with a Watermelon Meat-colored Strike King Rage Tail Craw trailer in 18 to 20 feet of water.

“I got on a shallow bite early in practice, so I went to the river Saturday but only caught one small fish by 1:30 p.m.,” said Reagan, who earned his fourth career win in BFL competition. “I ran back down to the main lake to the mid-lake area and ran some ledges. I marked fish and got four bites by the end of the day and they were the right ones.”

Reagan flipped shallow wood with a green-pumpkin Zoom Speed Craw with a 3/8-ounce weight to catch his keeper from the river.

“I returned to the same mid-lake area Sunday and caught two fish from a place I’d caught them Saturday, and the other two from ledges I hadn’t fished yet,” said Reagan. “I marked them and fished them with the same jig – I never laid it down. I lost my “fifth” a couple of times Sunday – it just didn’t get into the net.”

Reagan noted that his Lowrance electronics were essential to his win.

“I couldn’t have won without my Lowrance unit – they showed me the fish. I idled the ledges and when I‘d see them I’d stop the engine and cast in there. It seemed like I could catch them on a first or second cast.”

Copeland caught a bass weighing 5 pounds, 8 ounces – the heaviest of the event in the Boater Division. The catch earned him the Boater Big Bass award of $341.

Nick Haunert of Maineville, Ohio, caught the largest bass in the Co-angler Division – a fish weighing 3 pounds, 7 ounces – and earned the Co-angler Big Bass award of $341.