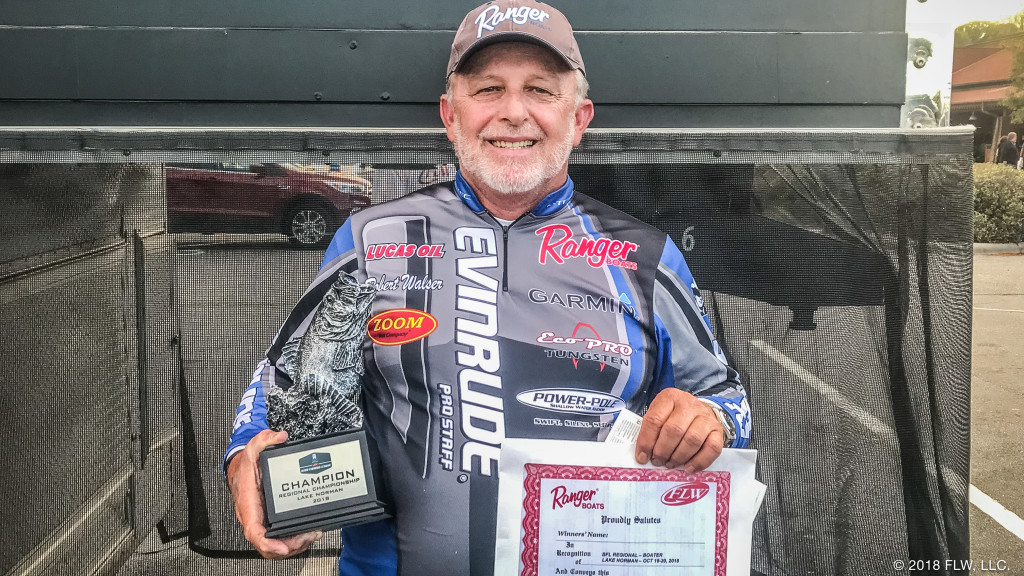 Walser said he made a 20- to 25-minute run to the Buffalo Shoals Road bridge near Long Island, North Carolina, each morning of the tournament and fished his way back to the takeoff ramp. Along his route, he flipped docks using a Texas-rigged, green-pumpkin-colored Zoom Baby Brush Hog and a Zoom Z Craw Jr. with 5/16th-ounce Echo Pro tungsten weights and 3/0-sized Berkley Fusion19 offset hooks. He also caught some bass on the bank between docks with a Rush Lures spinnerbait.

“I probably hit 80 to 100 docks each day. I’d fish three or four in a stretch and then move on,” said Walser, the 2006 BFL All-American champion who logged his 11th career victory in BFL competition. “A lot of the docks I targeted had brush, which I could see on my Garmin Panoptix electronics, so that’s where I concentrated my casts. All of my fish came from less than 10 feet of water.

“I keyed in on docks that have had fish on them over the past couple of weeks. Depth- and structure-wise, there wasn’t really anything that made one dock better than the next, they just needed to have fish,” continued Walser. “You could have three or four bites at one dock, and then not have anything at any others in the area.”

Walser said he caught 8 or 10 keepers each day Thursday and Friday, and at least three or four limits on Saturday. He used an 8-foot Lamiglas 806 flipping rod with a Pflueger 7:1 Supreme reel and 20-pound-test Berkley Trilene 100-percent fluorocarbon line.

“I think the south wind pushing the cold front toward us made them bite better Saturday,” said Walser. “There was also less fishing pressure [since only the top 12 anglers fish on Saturday].”

Walser went on to say that in addition to catching fish, he also had to deal with various mechanical issues. The North Carolina boater said he ended up needing to use a different boat each day of the event.

“An employee at Angler’s Choice Marine brought me the other boat I own on Thursday, which I used until a gasket failed on Friday. I’d like to give them a special thanks for helping me,” said Walser. “The mental strain of having all that stuff fail was a lot, but I got through it and it all worked it out.”