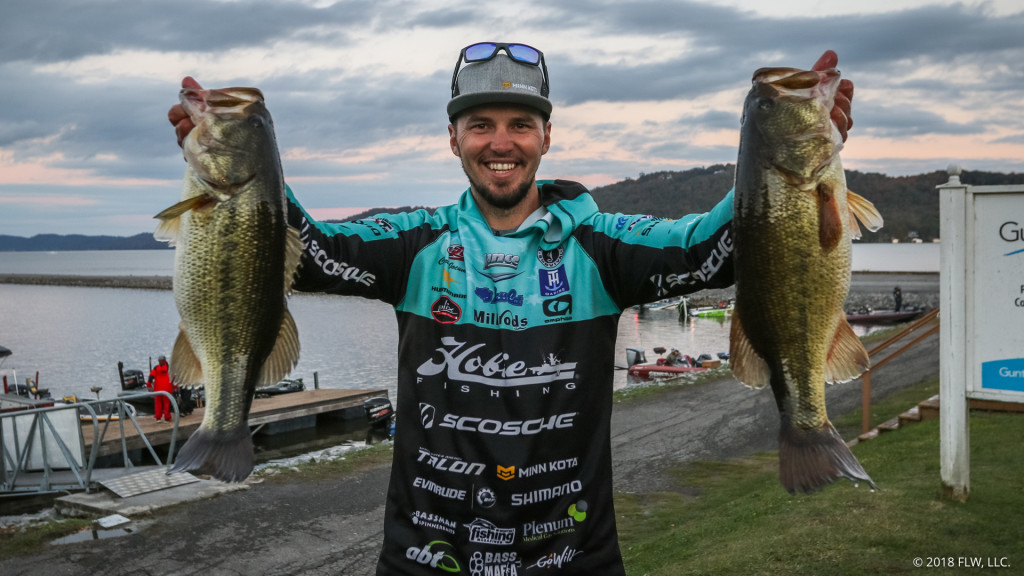 GUNTERSVILLE, Ala. – Pro Carl Jocumsen of Queensland, Australia, caught a five-bass limit weighing 20 pounds, 2 ounces Friday – the only 20-plus-pound limit of the day – to grab the lead after Day One of the Costa FLW Series Championship on Lake Guntersville. Jocumsen will bring a slim 3-ounce advantage into the final day of the event, which was shortened to two days after inclement weather moved through the area Thursday. The full field will fish again Saturday with the winner being determined by their two-day cumulative weight.

The Costa FLW Series Championship, hosted by the Marshall County Convention & Visitors Bureau, features anglers from across the world casting for a $95,000 prize package in the Pro Division, including a new Ranger Z518C boat with a 200-horsepower Evinrude outboard and automatic qualification to the 2019 Forrest Wood Cup – the world championship of bass fishing.

“I started out by jumping around. We’ve been off of the lake for two days [due to a mandatory off day and a cancellation day due to severe weather] so I knew I’d have to go fishing a little bit,” said Jocumsen. “I picked up a big glide bait and a pretty decent-sized swimbait and just kind of went for it.”

Jocumsen said that he went one-for-one with his co-angler, Jared West, (who leads the co-angler race) throughout the day, which made it difficult to pinpoint what the fish were doing. After the two logged catches with a few different baits, and with four good keepers in the livewell, Jocumsen said he decided to commit to the glide bait for the final two hours of the day.

“I usually wouldn’t pick up the glide bait with two hours to go, but everything was right and I’d gotten some awesome bites on it Saturday [my best day of practice],” said Jocumsen. “I went for it and a 5½-pounder crushed it beside the boat. Once that happened, I never put it down. With about 35 minutes to go, I caught another 5-pounder and got rid of a 2½-pounder – that put me at 20 pounds.

“This year, for me, has been ‘the year of the glide bait’,” continued Jocumsen. “It has pulled me out of some really bad situations. I’ve been dialing in on it for about four or five years, just trying to put it into my tournament arsenal rather than just have it be a bait that you throw for giants. I’ve sort of figured out how to do that and it’s paid off.”

Jocumsen said that tomorrow, he’s going to have to make some major adjustments in order to follow up his big day.

“I had some of the worst practice days ever Tuesday, Monday and most of Sunday and tomorrow is supposed to be the same conditions as those days,” said Jocumsen. “I’m going to have to adjust like crazy. I couldn’t get them to eat the glide bait in sunny conditions without wind. It had to be cloudy, rainy, windy, nasty weather, and that’s what I had today.”

The Texas pro went on to say that while the weather may not play into his hand Saturday, there is still a chance the glide bait could produce some big bites for him, saying that stain in the water could mimic cloud cover and trigger some bites.

“If everything goes to plan I can get on that early morning bite and get five by 10 o’clock, and then I can pick up the glide and things could get pretty scary,” said Jocumsen. “I think I need to get two big bites, but I don’t think I can get five. These fish are the smartest fish I’ve ever fished for right now.”

The top 10 boaters after Day One of competition on Lake Guntersville are:

Competitors qualified for the Costa FLW Series Championship through five U.S. divisions – Central, Northern, Southeastern, Southwestern and Western – and an International division that features anglers from Canada, China, Italy, South Korea, Mexico, Portugal, South Africa and Spain. The highest finishing pro from each U.S. division and the International division will qualify for the 2019 FLW Cup. A total of six FLW Series boaters will advance to the 2019 FLW Cup, which will be held at Lake Hamilton in Hot Springs, Arkansas, Aug. 9-11.

The top 10 co-anglers on Lake Guntersville are:

Area youth are encouraged to attend the free FLW Foundation Unified Fishing Derby at Guntersville City Harbor on Saturday, Nov. 3, from 1-2:30 p.m. The all-inclusive event is open to youth (18 and under) and Special Olympics athletes (all ages). Tackle, bait and expert assistance will be provided. Registration begins on site at noon.

In Costa FLW Series competition, each U.S. division consists of three regular-season tournaments with competitors vying for valuable points that could earn them the opportunity to compete in the season-ending Costa FLW Series Championship.