Hanselman Way in Front at Amistad 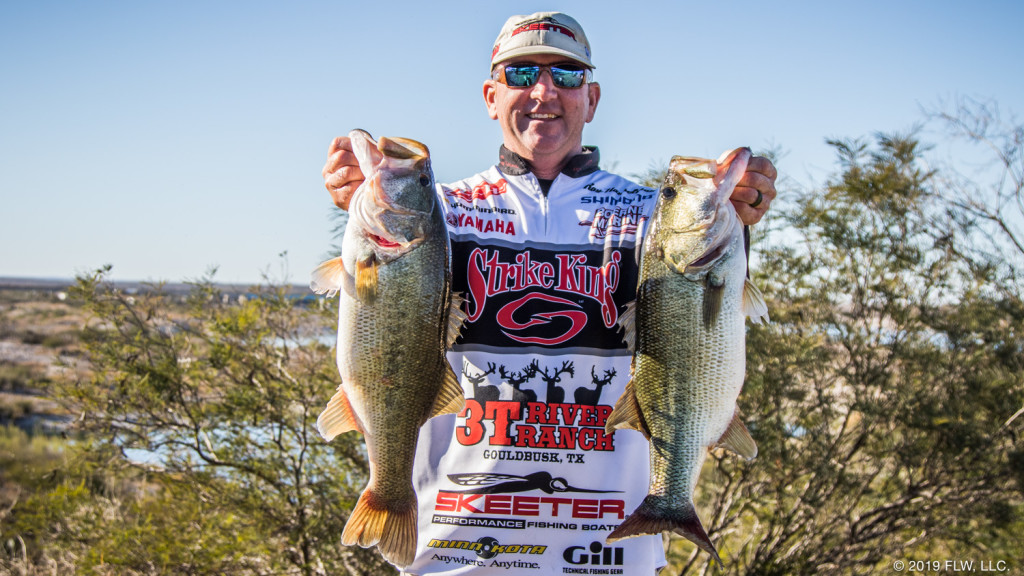 Suffice it to say that Ray Hanselman’s plan definitely came together – just a little earlier than he anticipated. The Del Rio, Texas, pro’s not griping, of course, as his limit catch of 25 pounds, 15 ounces leads by a wide margin at the Costa FLW Series Southwestern Division event presented by Ranger on Lake Amistad.

Working the perimeter of a spawning bay, Hanselman looked for scattered grass in 15 to 25 feet. He targeted bass that were transitioning from winter patterns to prespawn staging spots.

Hanselman, who swept the division in 2015 in one of the most remarkable seasons of bass fishing ever, says he carried moderately optimistic expectations into his home lake this week and ended up pleasantly surprised to be carrying a lead of 9-7 into tomorrow’s final round. (After Thursday’s scheduled start was postponed due to severe weather, the event was shortened to two days of competition.)

“It’s an unbelievable feeling to catch a bag like that on your home lake,” Hanselman says. “I was thinking I’d get lucky and catch 15 pounds of fish. In practice I found schools of fish, but this cold weather must have really bunched them up, so I was fishing the way I like to.”

Hanselman found his fish on three particular clumps of grass.

“It’s just little patches of it. That’s the way you want it because that congregates them on [a few] good patches. This place was set up good with grass that was growing a foot or two off the bottom.

“Once you find that grass with your bait, you can stay on it cast after cast,” he says. “One of those grass beds had three giants in it, including one that was about 7 pounds.

He threw an umbrella rig early in the day, but a Strike King 5XD was his main bait. Noting that natural colors work best in the lake’s clear water, he chose a bluegill pattern.

“I threw my baits on 10-pound Gamma fluorocarbon, just trying to get it down to the top of the grass,” Hanselman says. “I don’t want to bog it down. I just want to touch the grass every now and then.

“Luckily, they were inhaling it. I was using a 7-6 Power Tackle 550 rod, and that really ‘gives’ it to them so they get the hooks good.”

As Hanselman explains, he hit all of his historical spots in two days of practice and found a particular area where three consecutive casts yielded three 2-pounders in practice.

“I thought I’d start there and get a limit, and I stayed there all day,” he adds. “It’s been kinda slim pickings on big ones lately. You’ll catch one or two good ones, but I guess that cold weather the last two days really pulled them in.” 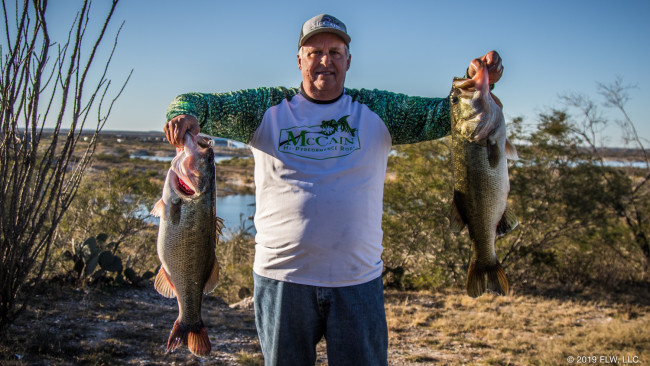 Normally, three fish won’t lead a tournament field, but for Houston co-angler Jay Childs, a trio that went 17-10 gave him the division lead by a margin of 3-3. Anchoring his bag was an 8-7 that fell just 4 ounces short of the co-angler division’s big fish – an 8-11 caught by Ray Helveston.

The cool part of this story is that Childs’ kicker was his first fish of the tournament, his first of 2019 and his first on an umbrella rig.

“I thought it was a striper because my boater, Roger Hughes, had been catching a bunch of stripers,” Childs recalls. “We went to another spot, and I caught another big one on the Alabama Rig. The first big fish was about 8 o’clock, and the second was about 2.”

Childs fitted his rig with Zoom Swimmin’ Super Fluke Juniors. He modified a five-arm rig by replacing hooked baits with decoys on the top two arms.

“When those fish bit, they really crushed it,” Childs says. “I was fortunate to catch one more fish on a Senko.”