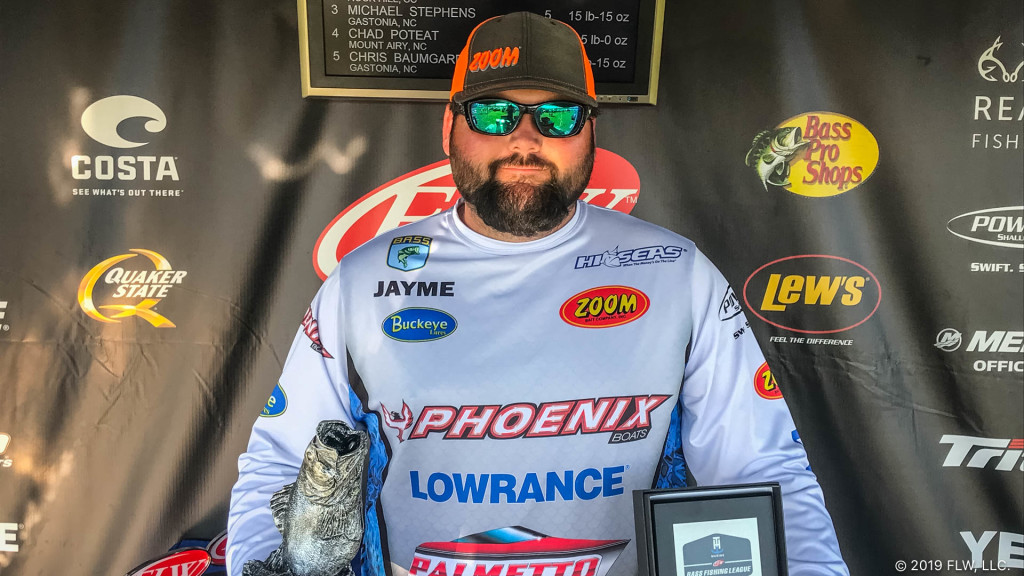 “I fished the lower end of the lake, near the dam around Allison and Big Allison creeks. There was a little bit of stained water down that way,” said Rampey, who earned his ninth career win in BFL competition – tied for ninth all-time. “I caught the majority of them on a square-billed crankbait. I threw it on flat points in the pockets, which I dialed in on using my Lowrance electronics. I sat in 4- or 5-feet-of-water while most of the fish were in 1½ to 2 feet.”

Rampey said he worked through 10 or 12 pockets, and that he caught eight keepers during his day. He said his crankbait of choice was a Crystal Craw-colored Strike King KVD Rattling Square-Bill crankbait. He caught the heaviest fish of the event – an 8-pound, 6-ouncer – on an umbrella rig with Pearl-colored Zoom Swimmin’ Super Fluke Jr. swimbaits with white Buckeye G-Man Finesse Swimbait heads.

“I caught the big one around 9 [a.m.]. It was the first fish of the day and the only one I caught from a dock,” said Rampey. “I was throwing Hi-Seas [15-pound-test] 100-percent fluorocarbon line. It had wrapped me up on a dock post and it held up. That fish was the difference-maker.”

Marlow caught the largest bass in the Co-angler Division, a fish weighing in at 4 pounds, 1 ounce. The catch earned him the day’s Co-angler Big Bass award of $250.

The tournament was hosted by Visit York County.