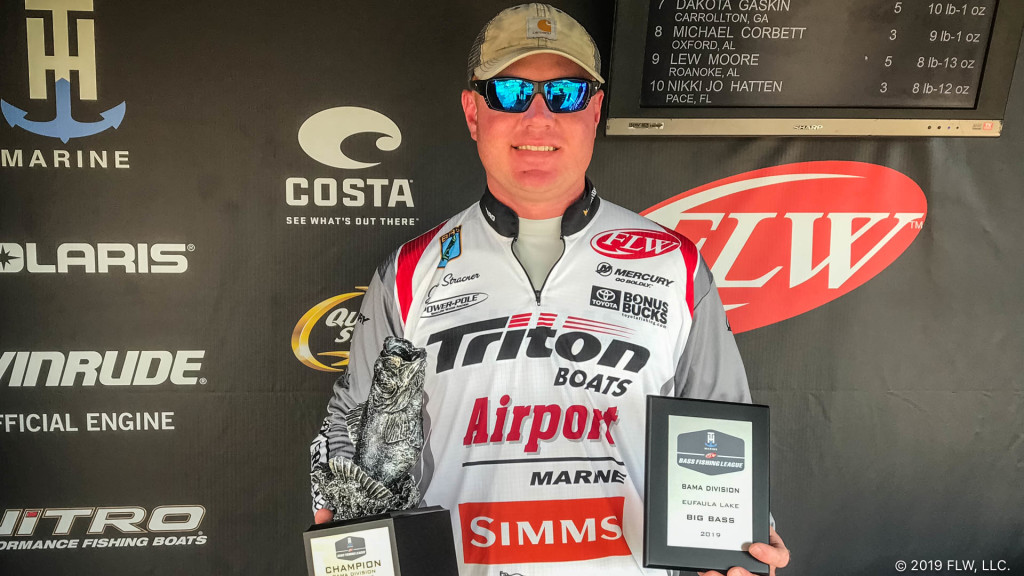 Stracner said he fished mid-lake, between the Highway 82 and 431 bridge crossings and that he put 10 keepers in his boat throughout the day.

“I caught a big one sight-fishing around 9 [a.m.]. It was my second keeper of the day and ended up being the biggest [in the boater division],” said Stracner, who earned his fourth win in BFL competition – second on Lake Eufaula. “I also caught one more shallow on the same stretch of grass.”

Stracner said he used a Texas-rigged, green-pumpkin Yamamoto Senko for his shallow fish. The rest of his limit was caught with a Sexy Shad-colored Strike King 6XD crankbait, on an offshore hump near the mouth of Barbour Creek.

“The other three bass in my limit were prespawn,” Stracner said. “They came in 16 feet of water and were within sight of where I caught the grass fish.”

Stracner’s big sight-fish was a 7-pound, 8-ouncer – the heaviest of the event in the Boater Division – and earned the day’s Boater Big Bass award of $460.

Corbett caught the largest bass in the Co-angler Division, a fish weighing in at 5 pounds, 7 ounces. The catch earned him the day’s Co-angler Big Bass award of $110.

The tournament was hosted by the Eufaula Barbour County Chamber of Commerce.