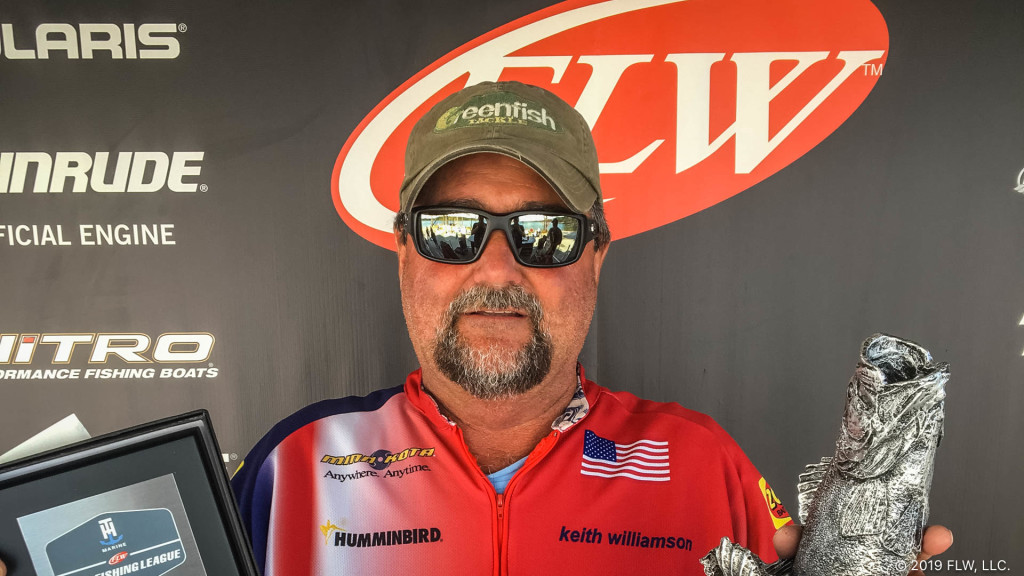 Williamson said he primarily fished the Little River arm on the Georgia side of the lake, not far from the Highway 47 bridge. He said he used a brown and purple-colored Greenfish Tackle Original Square Rubber Jig with a green-pumpkin and green-glitter Zoom Tiny Salty Chunk trailer to catch his first keeper. His next two came on a ½-ounce Almost-colored Greenfish High Class Double Willow spinnerbait with a Pearl-colored Zoom Fat Albert Grub on a trailer hook.

“My first three came pretty quickly,” said Williamson, who earned his third career win on Clarks Hill Lake in BFL competition. “I caught one on a jig at the rocks a little deeper and then went shallower to see if they were bedding, but didn’t get any bites. The wind started blowing a bit, so I switched to a spinnerbait. I threw to the shallowest part of the ridge – 5 or 6 feet of water – and caught one right away – a 3- or 4-pounder. Within a few casts I caught another one giving me three good fish before 10 [a.m.]

“I left that spot and hit another shallow hump nearby that was probably 3 feet deep on top and caught a good 2½- to 3-pound spotted bass on the spinnerbait,” said Williamson.

After the sun got up, Williamson said he moved from the clear water to more stained water above the Highway 47 bridge to finish out his day. There, he caught the heaviest bass of the tournament– an 8-pound, 3-ouncer – on his Greenfish spinnerbait.

“I’m pretty sure I caught that fish in practice and then caught it again during the tournament,” said Williamson. “It was in front of a willow bush. I tried for it and she swatted the spinnerbait next to the boat. I left to fish some pockets and flats, but returned with an hour left before weigh-in and caught her.”

Williamson’s 8-pound, 3-ouncer was the heaviest of the event in the Boater Division and earned the day’s Boater Big Bass award of $225.

Pare also caught the largest bass in the Co-angler Division, a fish weighing in at 5 pounds, 1 ounce. The catch earned him the day’s Co-angler Big Bass award of $112.