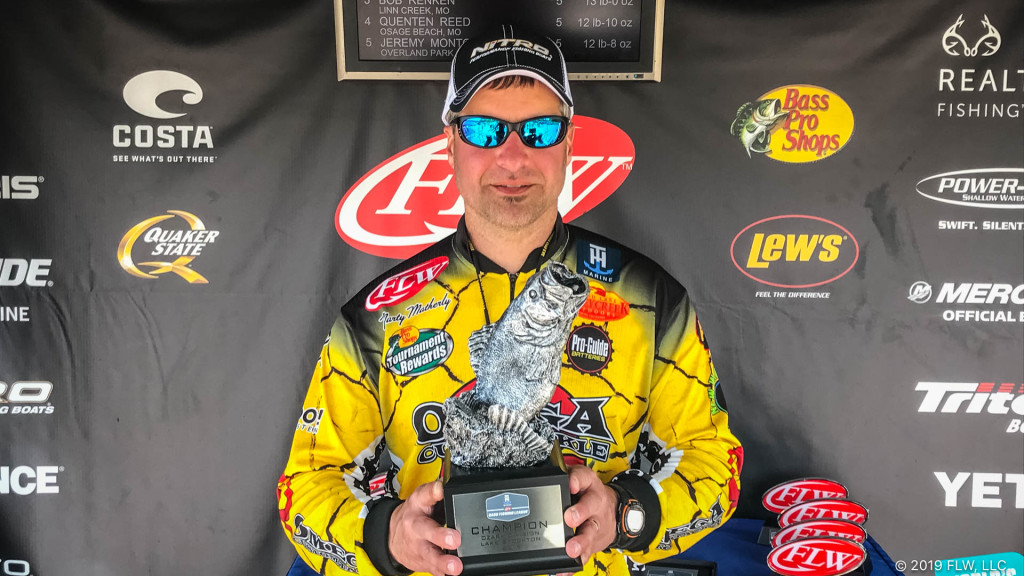 “The night before the tournament, my buddy told me to fish the moment, so I did,” said Matherly, who earned his first win FLW competition. “I told my co-angler I was going to throw a topwater because of the cloud cover and how calm it was, but in Son’s Creek my co-angler immediately caught a 3-pounder flipping. I decided to go with what they were biting. I started flipping bushes and immediately caught fish. They were on the outside edge of the bushes.

“By 9 [a.m.], I think I had three largemouth,” continued Matherly. “I had a feeling that fish were both coming from the spawn and going to spawn, so I moved out 20 yards past the main-lake point outside Son’s Creek, and that’s where I caught a 5-pounder in some bushes.”

Matherly said he used a Texas-rigged, Sooner Run-colored Gene Larew Hoodaddy with a 3/8th-ounce WOO! tungsten weight to catch his initial fish. After hooking one and losing it nearby, he said he went two hours without a bite. After some more time spent in Son’s Creek, he headed back toward the dam to finish out his limit.

“My fifth fish came from 20 feet of clear water at the dam, on a flat with rocks,” said Matherly. “I caught a few small ones at other spots before going to a main-lake point, also by the dam. With about 30 minutes left to fish, I caught a 3-pound largemouth. It was my winning fish.”

Reed caught a 5-pound, 14-ounce bass – the heaviest of the event in the Boater Division – and earned the day’s Boater Big Bass award of $605.

Moss caught the heaviest bass in the Co-angler Division, a fish weighing in at 5 pounds, 1 ounce. The catch earned him the day’s Co-angler Big Bass award of $151.