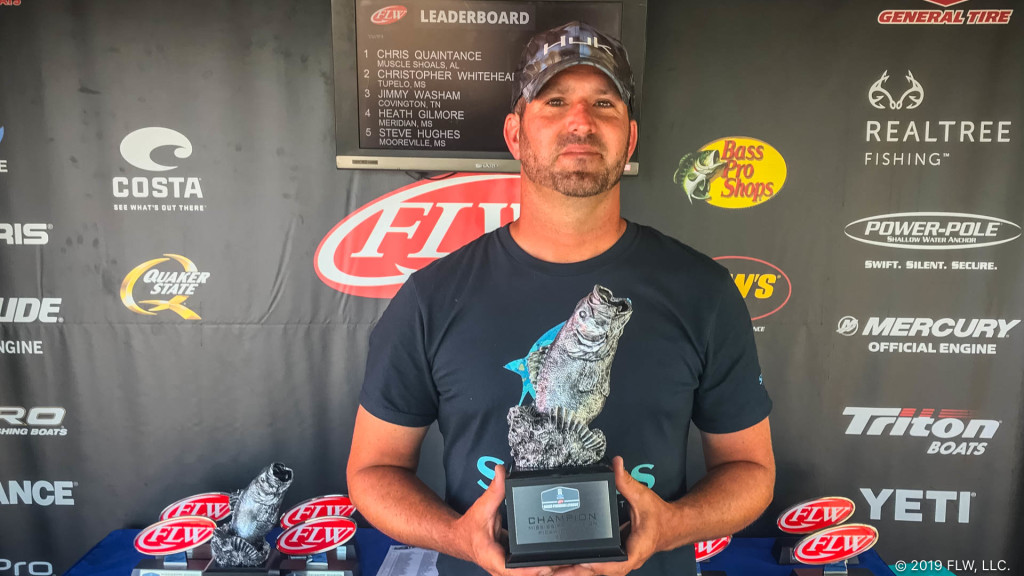 Quaintance said he put between 10 and 15 keepers in the boat during the event and weighed all largemouth.

“I started out the day mid-lake, rotating between a long point that had a little brush at the end of it in 6 to 8 feet of water, and 2 or 3 patches of weed beds 200 yards toward the shoreline,” said Quaintance, who notched his second win as a boater in BFL competition on Pickwick Lake. “I got two good keepers off the point and two from the weed beds. My fourth fish ended up being my heaviest – about 6½ pounds.”

“I had a limit by about 8:30 (a.m.) and decided to make a run upstream to an area where I thought I could get a big fish, but someone was on it,” continued Quaintance. “I ended up going to a secondary deal around Koger Island that I hadn’t planned on fishing, but had caught some good ones at before. I caught a 4½-pounder on the Mean Mouth jig, which culled out my smallest fish and really sealed the deal.”

Crouch caught a bass weighing 7 pounds, 13 ounces – the heaviest of the event in the Boater Division – and earned the day’s Boater Big Bass award of $565.

Steele caught the heaviest bass in the Co-angler Division, a fish weighing in at 8 pounds, 15 ounces. The catch earned him the day’s Co-angler Big Bass award of $282.