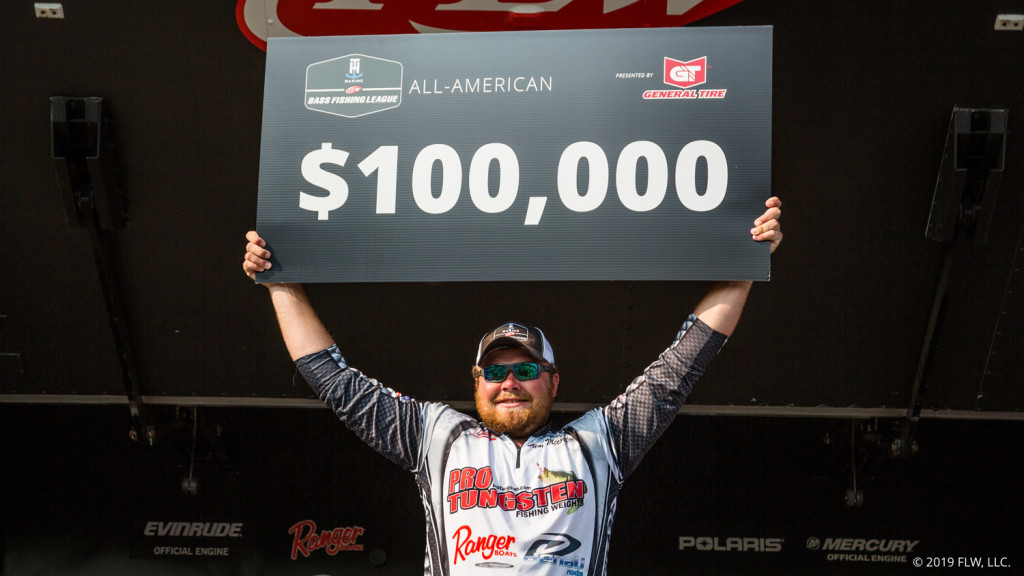 “This win means a lot. I grew up listening to my dad talk about this tournament and my grandpa talk about it – about how they always wanted to get here, but never made it. My dad has fell short a couple of times. Those two guys taught me everything know I about this sport. It’s an unbelievable feeling and it’s going to take a while to sink in, for sure.”

McCord said 14 of the 15 fish that he weighed this week came using a 3/8-ounce Z-Man ChatterBait Jack Hammer, in Spot Remover or black and blue, with either a Strike King Rage Tail Menace Grub or a Zoom Z-Hog Jr. trailer.

“I was fishing in Mattawoman Creek – I never left,” said McCord, who earned his second win in FLW competition. ”There was about a 200-yard stretch of milfoil that I found that had a little of bit of hydrilla mixed in with it and I think that was the key. Nobody fished it either, except for today. There was a local tournament going on.”

After working the area Thursday, McCord said he fished another spot in the same stretch of grass Friday. He noted that he actually caught his first fish flipping a laydown near the bank with a blacklight-colored Reaction Innovations Sweet Beaver with a 5/16-ounce tungsten weight on 25-pound-test Seaguar line, and then proceeded to do the rest of his work with the Jack Hammer.

Saturday, McCord said his day got off to a slow start at the grass stretch, prompting him to make some changes. With one good one and a keeper in the boat, he made another stop, but again, couldn’t get anything going.

“I pulled in to the back of the creek and started skipping my ChatterBait up underneath the pads and caught a good one, right up on the spatter-docks,” continued McCord. “Three of my best fish ended up coming from underneath the lily pads today. I went to a patch of milfoil in the middle of the creek back there that I had a weird feeling about, and I ended up catching a big one at it. I got lucky and had four good bites today.”

The top 10 boaters on the Potomac River finished:

Ben Dacey of Chesterfield, Virginia, won the Co-angler Division and $50,000 Saturday with a three-day total of 15 bass weighing 38 pounds, 2 ounces, followed by Todd Blakeman of Chatham, Illinois, in second place with 14 bass weighing 36-15, good for $16,950.

Hosted by the Charles County Board of Commissioners and Department of Recreation, Parks and Tourism, the T-H Marine BFL All-American featured a field of the top 98 boaters and co-anglers from across the 24-division BFL circuit competing for a grand prize of up to $120,000 in the Boater Division and $60,000 in the Co-angler Division. The top boater now receives an invitation to compete for bass fishing’s most coveted prize – the 2019 FLW Cup – Aug. 9-11 on Lake Hamilton in Hot Springs, Arkansas.

The 2019 BFL is a 24-division circuit devoted to weekend anglers, with 128 tournaments throughout the season, five qualifying events in each division. The top 45 boaters and co-anglers from each division, along with the five winners of the qualifying events, will advance to one of six regional tournaments where they are competing to finish in the top six, which then qualifies them for one of the longest-running championships in all of competitive bass fishing – the BFL All-American. Top performers in the BFL can move up to the Costa FLW Series or even the FLW Tour.