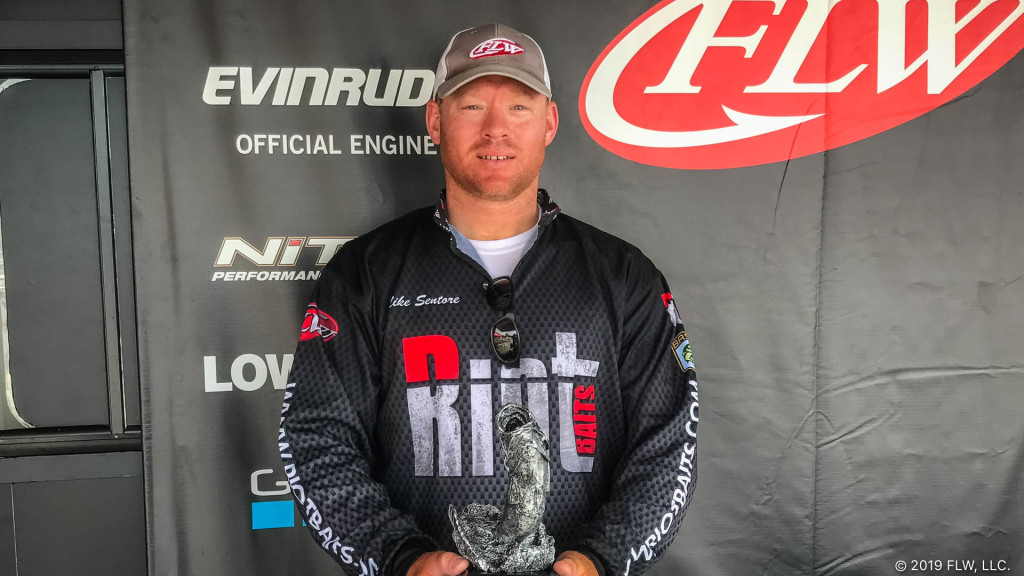 Sentore said he stayed in the North East River and Furnace Bay during the tournament, and caught all of his fish flipping a ½-ounce, green-pumpkin-colored Riot Baits Minima Jig with a Riot Baits Tantrum trailer of the same color.

“The Chesapeake Bay has been getting a lot of pressure, and by using a bait with a smaller profile, but still on 20-pound-test [Bass Pro Shops 100-percent fluorocarbon] line, it allowed me to get some bites behind other boaters,” said Sentore, who earned his first win FLW competition. “I was basically flipping laydowns and dock pilings. I caught them throughout the day – I’d get handful of bites each hour.”

Sentore said he caught around nine keepers and about 10 short fish on the day.

“I’d say high-tide in Furnace Bay was the best for flipping laydowns,” said Sentore. “In Furnace Bay there are essentially two sides – the Mill Creek side and the rest of Furnace Bay. The Mill Creek shoreline laydowns produced a handful of my keeper fish. And I got a couple of keeper bites on the lower water – the North East river. When the water was low and off the banks there was fish on the dock pilings. That kind of broke my day up.”

Bidniuk caught a bass weighing 6 pounds, 5 ounces – the heaviest of the event in the Boater Division – and earned the day’s Boater Big Bass award of $465.

Matthew Gaeng of Greeley, Pennsylvania, caught the heaviest bass in the Co-angler Division, a fish weighing in at 5 pounds, 5 ounces. The catch earned him the day’s Co-angler Big Bass award of $232.