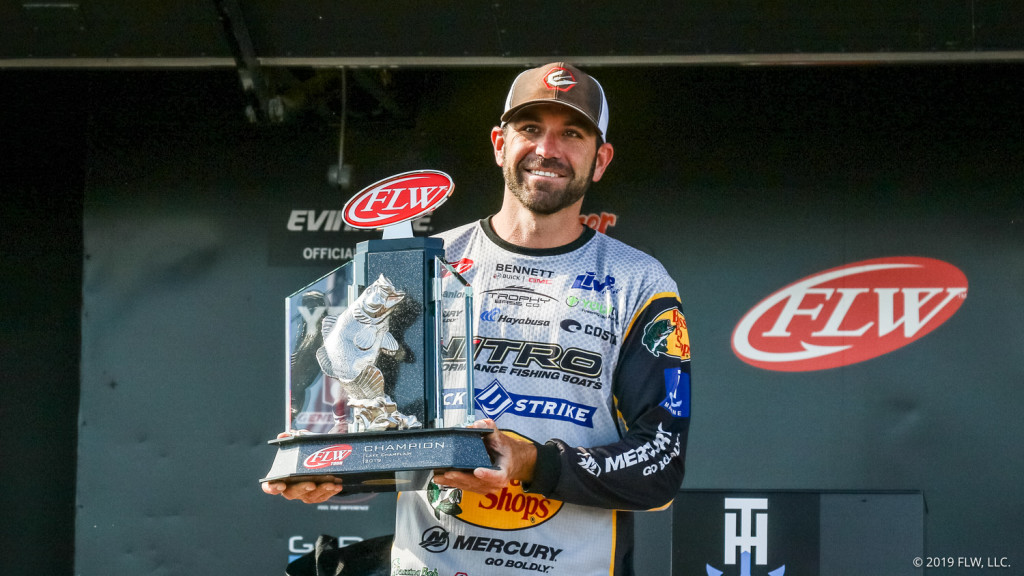 PLATTSBURGH, N.Y. – After starting the day in second place, pro Casey Scanlon of Lake Ozark, Missouri, caught a five-bass limit weighing 19 pounds, 10 ounces, Sunday to vault to the top of the leaderboard and win the FLW Tour at Lake Champlain presented by T-H Marine with a four-day total of 20 bass weighing 76 pounds, 2 ounces. Scanlon’s weight was enough to edge second place angler Jackson Kayak pro Eric Jackson by 1 pound, 11 ounces, in the event that featured 163 of the world’s most decorated bass anglers competing over four days on Lake Champlain.

“It’s been a long time coming. I’ve been doing this for eight years now and on a couple of different tours. I’ve had the opportunity to win several times and haven’t gotten it done, so today is a pretty special day,” said Scanlon, who earned his first career win in FLW Tour competition. “I’ve been fishing tournaments since I was 15 and it’s not easy out here, but days like this make it all worth it.”

Scanlon spent the event targeting largemouth down near Ticonderoga. Early in the tournament, most of his bass came off shallow rock inside of a milfoil edge. As the tournament progressed, though, he caught more fish from the grass, with all of his keepers today coming from the grass.

“I did junk it up a little bit, but I got myself in some decent areas, and I tried to make the most out of them by switching baits and trying some different stuff throughout the tournament,” said Scanlon.

Scanlon did have a primary area that produced his initial limits on days one through three – a pair of main-lake points along Champlain’s eastern shoreline that were swept by current. Today, the area didn’t produce, but he was able to make the necessary adjustments to put together a solid limit.

“The fish were obviously using the current to feed, and there was bait there, which was a big key,” said Scanlon. “You’d see a lot of activity in the grass. That’s probably the main reason those fish were there.”

In his areas, Scanlon used a 3/8-ounce chartreuse and white Z-Man ChatterBait with a white soft jerkbait trailer for rocks and scattered milfoil, and a green copper shad-colored Luck-E-Strike Series 3 square-billed crankbait on rocks and in looser grass. A few fish early in the tournament bit a Luck-E-Strike Pow Stik, rigged with either a 3/16- or 1/4-ounce Bass Pros Shops tungsten weight, and a black and blue Bass Pros Shops tube. He also ran a 1/2-ounce Trophy Swim Jig through lily pads and pencil reeds in shallow water.

“Depending on the cover I’d always start with a moving bait, usually the ChatterBait, and when it was sparser grass I’d use the crankbait. When I’d catch a few, I would slow down and pick it apart with the Pow Stik,” said Scanlon. “I was just fortunate to dial into the fish every day – locations and baits changed daily on me.”

With his win, Scanlon earned enough points to qualify for the FLW Cup – the world championship of bass fishing – August 9-11 on Lake Hamilton in Hot Springs, Arkansas.

“I needed a big derby to make the FLW Cup,” said Scanlon. “I knew I probably needed a top-12 [finish] here to make it and we’re sitting here now. I’m ready to go to Hot Springs.”

Polaris pro David Dudley of Lynchburg, Virginia, won the prestigious 2019 FLW Tour Angler of the Year (AOY) Saturday, becoming the first angler in the history of the FLW Tour to claim four titles (2019, 2012, 2011 and 2008). He narrowly edged out Berkley pro John Cox of DeBary, Florida, by just 17 points in a tightly contested race that was too close to call until Cox’s 28th place finish. Dudley, who received $100,000 for the title, will also receive an automatic berth into the 2020 FLW Cup.

Pro Ron Nelson of Berrien Springs, Michigan, clinched the Polaris 2019 FLW Tour Rookie of the Year (ROY) award Saturday, which is awarded to the rookie pro angler who finishes the season with the highest point total. For his efforts, Nelson won a Polaris Sportsman® 570 ATV.

In FLW Tour competition, the full field of 163 pro anglers competed in the two-day opening round on Thursday and Friday. The top 30 pros based on their two-day accumulated weight advanced to Saturday. Only the top 10 pros continued competition Sunday, with the winner determined by the heaviest accumulated weight from the four days of competition.

Throughout the season, anglers were also vying for valuable points in hopes of qualifying for the 2019 FLW Cup, the world championship of professional bass fishing. The 2019 FLW Cup will be on Lake Hamilton in Hot Springs, Arkansas, Aug. 9-11 and is hosted by the Arkansas Department of Parks and Tourism and Visit Hot Springs.