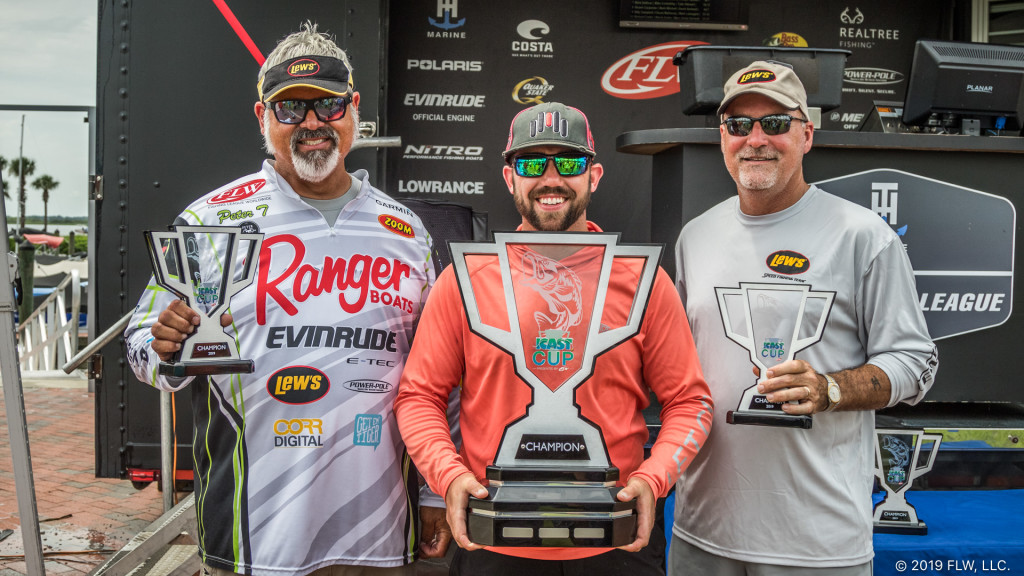 KISSIMMEE, Fla. – Representing Lew’s, the team of John Carman, Peter Thliveros and Matthew Mattingly won the 2019 ICAST Cup at Lake Toho Wednesday with a five-bass limit that weighed 20 pounds, 4 ounces. It’s the first time in the ICAST kickoff event’s five-year history that a team has won two titles, and they come back-to-back – though this time it was an outright win.

The charity tournament, which helps raise money to support KeepAmericaFishing’s fight to preserve your right to sustainably fish on our nation’s waterways, generated more than $11,000 today. The field totaled 56 boats, including about a dozen FLW Tour pros, as well as outdoor media and industry representatives from popular tackle brand and non-profits. In its five-year history, the charity tournament has raised more than $49,000 for KeepAmericaFishing.

The Lew’s team won by a margin of 7 ounces over Team Cox Juice, which was comprised of FLW Tour pro John Cox, Keith Carson, Hunter Shyrock and Brian Stockl. Carman and Mattingly, both salesmen for Pitman Creek, were invited by Lew’s to fish the tournament and represent the brand, which has been a supporter of the ICAST Cup since the beginning.

Obviously, they had a good time fishing with one of bass fishing’s most beloved pros.

Thliveros put in two days of practice before the tournament to find a couple schools of fish. The Lew’s team waylaid some 12-inch keepers on topwater at their first stop, then decided to make the move that won them the tournament.

“In an hour’s time they had all quit biting, and I looked at these guys and said, ‘If they’re not going to bite, let’s just go where the big ones are and let them not bite; just in case,’” Thliveros said. “I practiced two days, and in two days I literally had seven bites. I stopped on one of the waypoints that I’d caught a 5-pounder on. John says, ‘Where do we throw?’ I said, ‘Just pick a spot. Hit the water somewhere.’ On his first cast he catches a 3 1/2-pounder. We cull. Five minutes later he catches another 3 1/2-pounder. We cull. Then Matthew picks up a spinnerbait and whacks two 3 1/2-pounders.

“I said, ‘Look guys, I’ll just drive. You fish. Y’all handle everything. I’ll just be right here in the area where they live.’ So we kept catching fish. It was slow, but we culled up. And at the very end of the day they let me catch one that pushed us up to the top.”

The last fish weighed 5-7, and after culling out their smallest, the anglers hauled straight back to weigh-in to make the check-in time.

If it sounds like a lot of preparation went into this charity event, that’s because Thliveros came to Orlando intent on defending his team’s title.

“Just because we won it last year I really wanted to try and come out here and do what we did, but I really wasn’t expecting it after the practice,” he admitted. “To go two days of practice and only have seven bites, you don’t have really good confidence. It was a struggle to get any bites, but the weather conditions were in our favor today. The wind blew. There was some cloud cover. And we just landed on them when they decided to bite. That’s all the big difference was.”

The top 10 teams finished the tournament in:

Complete results for the tournament will be posted at ICASTCup.com.

Photos from the event will be posted at FLWFishing.com.

KeepAmericaFishing™ is leading the fight to preserve your right to sustainably fish on our nation’s waterways. As the voice of the American angler, KeepAmericaFishing works to keep our public resources – our oceans, lakes, rivers and streams – open, clean and abundant with fish. For more information, please visit KeepAmericaFishing.org.