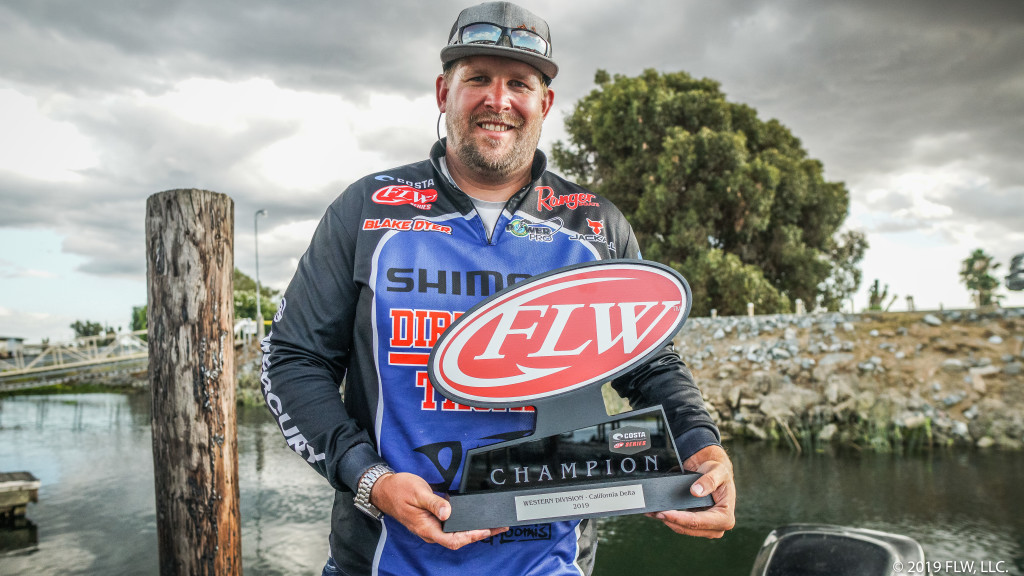 Dyer’s three-day total of 15 bass weighing 62 pounds, 13 ounces was enough to earn him the victory by a 1-pound, 9-ounce margin over second-place pro Jason Borofka of Salina, California, and earn him the top prize of $31,114. The tournament was the third and final regular-season tournament of the year for anglers competing in the Costa FLW Series Western Division.

Dyer weighed in a monster 27-pound, 3-ounce limit on Day One of the tournament, catching all of his fish punching grass with a green-pumpkin-colored Reaction Innovations Spicy Beaver and a 1½-ounce weight. He said that most of his damage was done pretty early in the morning.

“I had what I had by about 9:45 in the morning,” Dyer said. “On the first stretch I went to, I caught two big ones. I think the biggest one was close to 7 and then another one over 5.

Cooler weather and steady winds forced Dyer and many others to adjust on day two. Dyer skipped one of his starting spots because the wind had blown the mat he intended to fish completely away.

“At my second spot it was blowing and I tried to punch those mats, but I just wasn’t getting through because the wind really compacts those mats,” Dyer said. “I didn’t want to waste any more time and lose the tide down in my south spot, so I ran to a tule island and caught a 2-pounder on a Senko and then booked it down south to my main spot.”

His southern area was considerably more protected, and he alternated between fishing a vibrating jig in the open areas and punching the mats.

Carrying the momentum of two big catches into the final round, Dyer started day three by returning to the Central Delta Slough where he had done most of his previous work. He actually had a different starting spot on days one and two, but his best area sees a lot of waterski and wakeboard activity on the weekends, so he decided to beat the rush.

With the exception of a few locals, who graciously gave him a wide berth, Dyer had the spot to himself. Despite the week’s cold front, which cranked up winds of 15-20 mph and dropped air temperatures a good 20 degrees from day one, his fish started biting in short order — but only after a key adjustment.

“I noticed the grass was flowing the opposite direction and I was going too fast, so I gunned it to the other end of the slough, turned around and started fishing the other direction so my bait was in the current, where the fish are looking up,” Dyer said. “Fish tend to point into the current so they see what’s coming at them. If you’re going the other way, they don’t have a chance to see it.

“My first cast, I catch a 3-pounder and then 10 minutes later, I catch a 6-pounder that made all the difference and won the tournament.”

Mark Daniels Jr. of Tuskegee, Alabama, weighed in a big 8-pound, 13-ounce bass Thursday – the heaviest of the tournament in the Pro Division – and also earned the day’s Boater Big Bass award of $196.

Jack Farage of Discovery Bay, California, won the Co-angler Division Saturday with a three-day total of 15 bass weighing 37 pounds, 2 ounces. For his win, Farage took home the top prize package of a new Ranger Z175 boat with a 115-horsepower outboard motor, worth $27,100.

Laguna caught the biggest bass of the tournament in the Co-angler Division Friday, a fish weighing 7 pounds, 12 ounces. He earned the day’s Co-angler Big Bass award of $130.

The Costa FLW Series on the California Delta presented by Power-Pole was hosted by Russo’s Marina and the Sugar Barge RV Resort & Marina. It was the third and final tournament in the 2019 regular season for Western Division anglers. The next tournament for FLW Series anglers will also be in the Southwestern Division, the Costa FLW Series at Grand Lake presented by T-H Marine, held Oct. 3-5 in Grove, Oklahoma. For a complete schedule, visit FLWFishing.com.