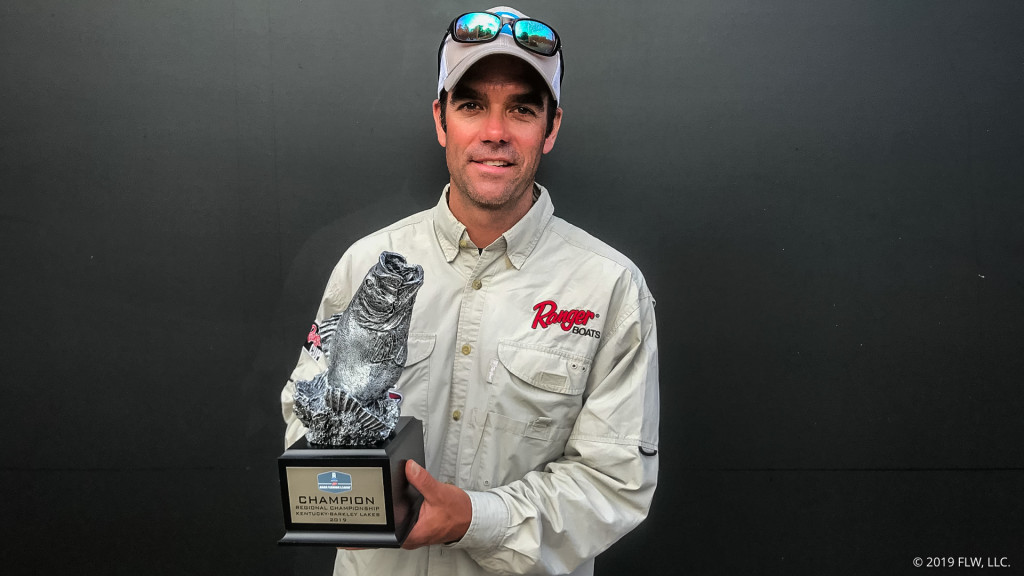 BUCHANAN, Tenn. – Boater Mark Myers of Cedar Falls, Iowa, brought a three-day total of 12 bass to the scale weighing 31 pounds even to win the no-entry fee T-H Marine FLW BFL Regional Championship on Kentucky/Barkley Lakes presented by Evinrude Saturday. For the win, Myers earned $70,000, including a new Ranger Z518L with a 200-horsepower Mercury or Evinrude outboard and automatic entry into the 2020 BFL All-American Championship, April 30-May 2, at Lake Hartwell in Anderson, South Carolina.

Myers is a long-time BFL Great Lakes Division competitor, having fished events since 2005. Along the way, he has competed in several BFL Regionals, including several at this year’s venue. A change in his approach is what he attributes to his success this time around.

“I am a deep-water finesse angler, and I always tried to make it work on Kentucky Lake, and it never does for me. This time I abandoned that and committed to shallow water,” said Myers.

He committed to making the long run each day to New Johnsonville. What he had found was a backwater slough off the main river channel with a shallow flat and a ditch running through it. In this area were scattered stumps, wood, and, most importantly, bass feeding on baitfish.

The first day Myers made the hour-long run to his winning location, put the trolling motor down, and then never picked it up the rest of the day.

“I was fishing a bone-colored Heddon Super Spook and caught five fish, about one every hour. I had my limit at 12:30 and then went searching for new areas,” he said.

The second day brought different conditions, and he was only able to muster two fish for 4-5.

“I caught a 13-inch spotted bass right away, and then it went dead. The first day they were hitting my topwater aggressively, but on the second day, they were coming up and rolling on it and missing it,” Myers recalls.

Around midday, he noticed shad being pushed near the bank, and he edged his trolling motor as far as it could go in the shallow water. Myers then made a long cast with a bone-colored River2Sea Whopper Plopper 90 and hooked a 3-pounder. Then, near the end of the day, he broke off a solid keeper on a finesse jig, which gave him a clue for the final day.

Myers found himself in eighth place going into the third and final day. The morning arrived with less fog, and that allowed him to get to his area much more quickly than he had the previous two days.

“There were two ways to get in, and I went in the opposite direction of how I had been entering, and that allowed me to get to the prime areas much sooner. When I got there, I caught two spotted bass in the first 15 minutes, and then caught a largemouth close to 6 pounds shortly afterward,” Myers said.

With three quick fish in the livewell, Myers assured himself that his All-American berth was sewed up and committed to finishing out his tournament in the backwater. He added one more spotted bass on a Reaction Innovations Skinny Dipper and then went back to the log where he broke off a bass the previous day and added a 3-pounder on a jig.

“I was using a Lethal Weapon Lethal Bug in green pumpkin/orange with a green pumpkin Zoom Ultra Vibe Speed Craw. That is my ultimate confidence lure. I use it everywhere,” he said.

When asked for the key to his victory, Myers had two answers.

“The first thing was picking the right area of the lake. I knew that place had big fish potential,” he says. “The other key was that there are more spotted bass on that end of the lake.”

Of Myers’ 12 keeper bass, eight were largemouth, and four were spotted bass.

Lenny Bays of Dayton, Kentucky, weighed in six bass over three days totaling 19 pounds, 6 ounces to win the top co-angler prize package of $50,000, including a new Ranger Z518L with a 200-horsepower Mercury or Evinrude outboard.

The T-H Marine FLW BFL Regional Championship on Kentucky/Barkley Lakes presented by Evinrude was hosted by the Henry County Alliance. It featured the top pros and co-anglers from the Great Lakes (Minnesota-Wisconsin-Iowa), Hoosier (Iowa), Okie (Oklahoma), and Michigan divisions.