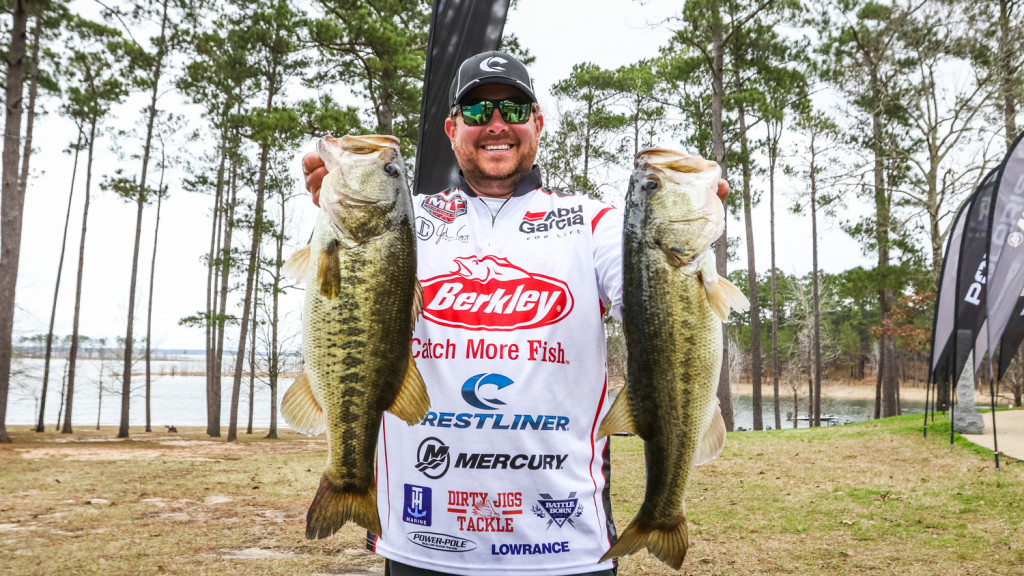 FOR IMMEDIATE RELEASE: BROOKELAND, TEXAS – Berkley pro John Cox of DeBary, Florida, weighed a five-bass limit totaling 21 pounds, 7 ounces, Thursday to grab the early lead after Day One of the Tackle Warehouse Pro Circuit at Sam Rayburn Reservoir. Veteran FLW pro Greg Bohannan of Bentonville, Arkansas, is in second place, just 3 ounces behind Cox after bringing a 21-4 limit to the scale. The season-opening Tackle Warehouse Pro Circuit event features a field of 154 bass-fishing professionals from around the world casting for a top award of up to $135,000.

“My morning was pretty slow, but it turned out to be a really awesome day,” said Cox, who has more than $1.3 million in career earnings with FLW. “I didn’t have anything special – only 10 or 11 pounds – until almost noon. I was getting a little down, so I just started whipping my crankbait out into open water. I caught one off of a bush, and that’s what slowed me down. Then I found a little area that had them.”

Cox said he culled out his entire limit and weighed in five keepers all from that one area. He said that his key bait was a Berkley Frittside 5 crankbait.

“They weren’t crazy-stacked up, but they all came on the same kind of throw,” Cox said. “You knew when you were around them because you could feel the bait coming over the fish – it felt like reeling over logs. Then all of a sudden one would eat it.

“What’s crazy is that I caught them flipping there in 2010,” Cox continued. “It was a fall tournament. I had nothing, then went up there and found some hydrilla mats and ended up flipping like 18 pounds. Now I’m just throwing the crankbait in the same spot.”

Cox believed that the fish he caught today were not resident fish.

“I’m pretty sure it was a transition area – they were either coming or going, but they were just passing through there for some reason,” Cox went on to say. “They might not be there tomorrow, but I hope that I can still find them. I’m just going to try to milk it for all its worth.”

The top 10 pros after day one on Sam Rayburn Reservoir are:

Buck won the day's $500 Berkley Big Bass award in the pro division after bringing a largemouth weighing 9 pounds, 8 ounces to the scale.

In Tackle Warehouse Pro Circuit competition, the full field of 154 pro anglers compete in the two-day opening round Thursday and Friday. The top 30 pros based on their two-day accumulated weight advance to Saturday. Only the top 10 pros continue competition Sunday, with the winner determined by the heaviest accumulated weight from the four days of competition.

For youth, the FLW Foundation’s Unified Fishing Derby will be held at the pavilion on Saturday from 1 p.m.-3 p.m. The event is hosted by Tackle Warehouse Pro Circuit anglers, and is free and open to anyone under the age of 18 and Special Olympics athletes. Rods and reels are available for use, but youth are encouraged to bring their own if they own one. The 1st and 2nd place anglers that catch the biggest fish will be recognized Saturday on the FLW Pro Circuit stage, just prior to the pros weighing in.

The popular FLW Live on-the-water broadcast will air on Days Three and Four of the event, featuring live action from the boats of the tournament’s top pros each day. Host Travis Moran is joined by former FLW pro Todd Hollowell to break down the extended action each day from 8 a.m. to 2 p.m. On-the-water broadcasts will be live streamed on FLWFishing.com, the FLW YouTube channel and the FLW Facebook page.