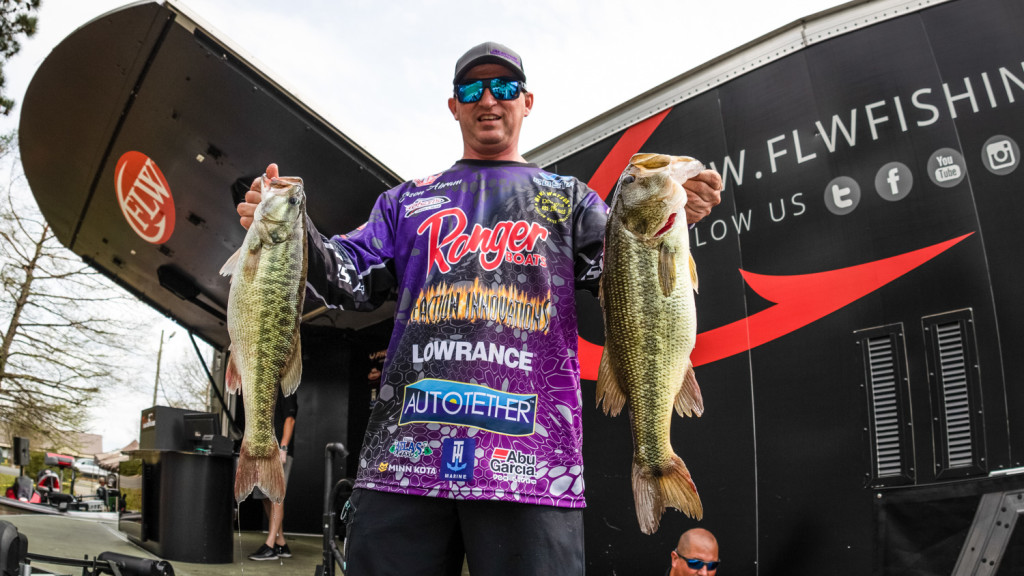 ALEXANDER CITY, Ala. – Pro Jason Abram of Piney Flats, Tennessee, caught five bass weighing 17 pounds, 10 ounces Thursday to take control of the leaderboard after Day Two of the Tackle Warehouse Pro Circuit at Lake Martin in Alexander City, Alabama. Abram’s two-day total of 10 bass weighing 29 pounds even gives him a 1-pound, 9-ounce advantage heading into Day Three of the four-day competition that features a field of bass-fishing professionals from around the world competing for a top cash award of up to $135,000.

“I’m fishing mid-lake, running a pattern,” said Abram, who is fishing in his 11th season as a professional in FLW’s top-level circuit. “I was running and gunning – I hit around 30 stops today.

“I started out in the morning catching spotted bass – I probably caught around 30 of them and my limit weighed around 7 pounds,” Abram continued. “I had a key bite around 9 a.m. that clued me in and showed me something that I hadn’t seen all week. It was the first fish that I had caught like that, and it was a good one.

“I ended up culling every one of those spots out and managed to bring one big spot and four largemouth to the scale.”

Although Abram remained tight-lipped about the specific details of his pattern, he said that he was fishing “really shallow” and throwing just two baits – both made by Reaction Innovations.

“I’m not sight-fishing like most of the guys are,” Abram said. “I need the sun, so the cloud cover being forecast tomorrow will probably hurt me significantly. I’ll catch some spots in the morning, and hopefully the sun will show its head. If not, I’ll have to scramble.”

The top 30 pros that made the cut and will fish Friday on Lake Martin are:

Martin brought the largest bass of the day, a 6-pound, 1-ounce largemouth, to the scale Thursday to claim the day’s $500 Berkley Big Bass award.

The Tackle Warehouse Pro Circuit at Lake Martin is hosted by the Alexander City Chamber.

In Tackle Warehouse Pro Circuit competition, the full field of 150 anglers competed in the two-day opening round Wednesday and Thursday. The top 30 pros based on their two-day accumulated weight now advance to Friday. Only the top 10 pros continue competition Saturday, with the winner determined by the heaviest accumulated weight from the four days of competition.

Anglers will take off at 7 a.m. CST each day from Wind Creek State Park, located at 4325 Alabama Highway 128, in Alexander City. Daily weigh-ins will be held at the State Park beginning at 3 p.m.

The FLW Live on-the-water broadcast will air on Friday and Saturday, featuring live action from the boats of the tournament’s top pros each day. Host Travis Moran is joined by Toyota Series pro Todd Hollowell to break down the extended action each day from 8 a.m. to 2 p.m. On-the-water broadcasts will be live streamed on FLWFishing.com, the FLW YouTube channel and the FLW Facebook page.