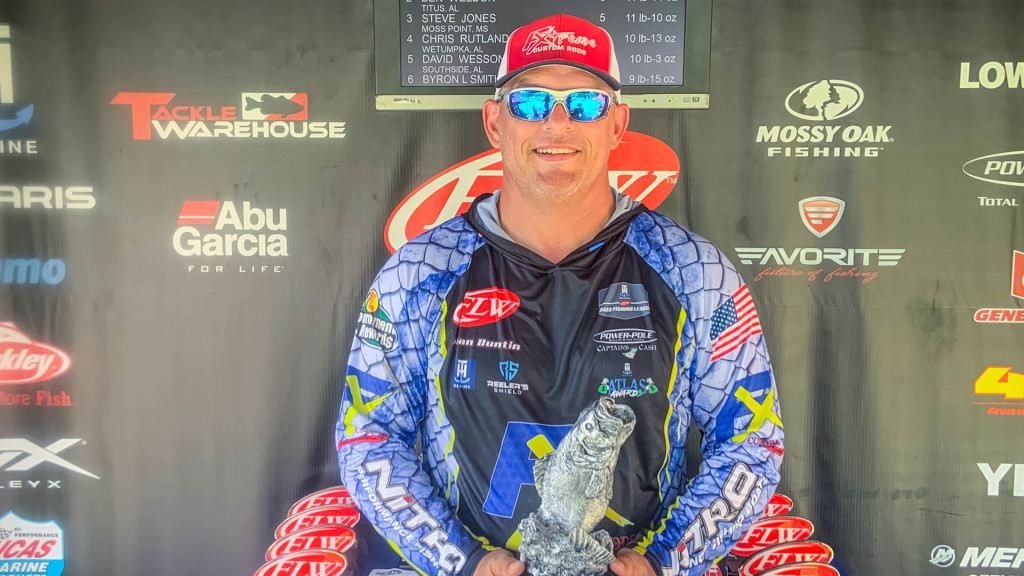 “I’m so excited and pumped, I could cry,” said Buntin, who earned the first FLW victory of his career. “I’ve fished close to 50 events and put a lot of work in. I finally got the win, and it is awesome.”

Buntin said that he was fishing a deep brush pile when he noticed bass schooling near a little outlet ditch. He quickly capitalized to put the winning limit in his livewell.

“I was fishing a deep brush pile when I happened to look up the river and there was a little ditch that looked like there was some action on it,” Buntin said. “I slowly made my way up there and chunked a (River2Sea) Whopper Plopper in there and they just smoked it. About 10 casts later I had my weight for the day.

“I had a limit by 7:45 a.m.,” Buntin continued. “They all came on the Plopper, fished on a 7-foot, 8-inch FX Custom cranking rod. It’s made for crankbaits, but it works really nice for that Plopper.”

Weldon caught brought a 5-pound, 1-ounce largemouth bass to the scale to add $515 – the day’s Boater Big Bass award – to his winnings.

Thomas Frink of Cedartown, Georgia, was the highest-finishing FLW PHOENIX BONUS member and took home an extra $500. Boaters are eligible to win up to an extra $7,000 per event in each Phoenix Bass Fishing League presented by T-H Marine tournament if all requirements are met. More information on the FLW PHOENIX BONUS contingency program can be found at PhoenixBassBoats.com.

Yoerg caught the largest bass in the Co-angler Division – a nice 4-pound, 11-ouncer. The catch earned him the day’s Co-angler Big Bass award of $202.

The 2020 Phoenix Bass Fishing League presented by T-H Marine on the Alabama River was the fourth of five qualifying events in the Bama Division.

The top 45 boaters and co-anglers in the Bama Division based on point standings, along with the five winners of each qualifying event, will be entered in the Oct. 8-10 Bass Fishing League Regional Championship on Lake Chickamauga in Dayton, Tennessee, hosted by the Rhea Economic and Tourism Council. Boaters will compete for a $60,000 prize package, including a new Phoenix 819 Pro bass boat with a 200-horsepower Mercury outboard and $10,000, while co-anglers will fish for a new 18-foot Phoenix bass boat with a 200-horsepower outboard.