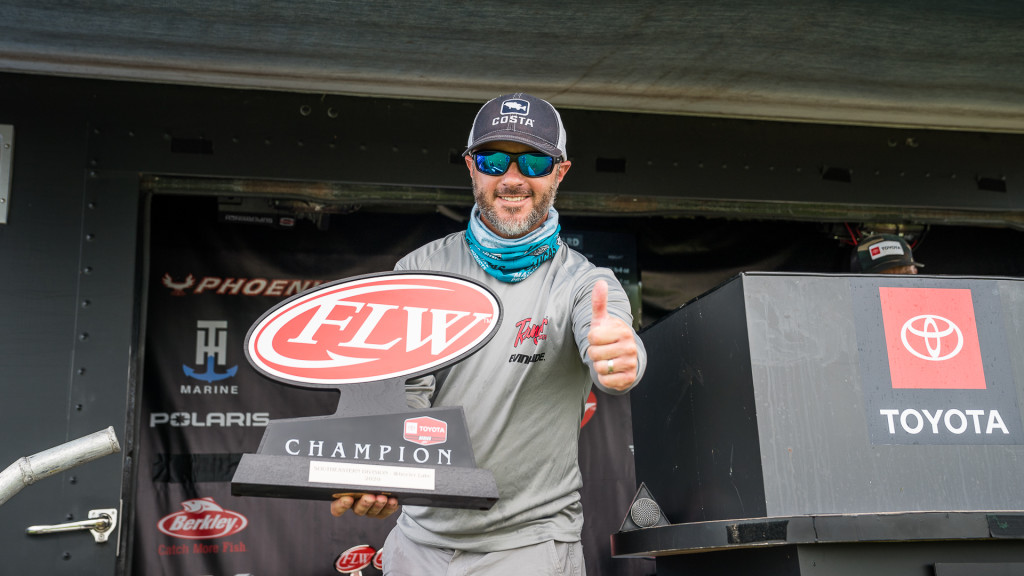 DECATUR, Ala. – Boater Kip Carter of Mansfield, Georgia, brought a five-bass limit to the scale Saturday weighing 15 pounds, 8 ounces to win the three-day Toyota Series at Wheeler Lake tournament in Decatur, Alabama. Carter’s three-day total of 15 bass weighing 41-14 earned him the win by a comfortable 4-pound, 11-ounce margin over second-place angler Harry Peyton of Guntersville, Alabama, and earned Carter the top payout of $22,286 in the second tournament of the 2020 Toyota Series Southeastern Division.

Carter’s win this week was particularly special to him since he used his 2002 aluminum tunnel hull “beater” rig to help him get the job done.

“I’ve had that tunnel hull for 16 years,” said Carter, who has 50 career top-10 finishes in FLW competition. “It’s a special boat to me. I bought it to fish the Ocmulgee River, which is a shallow, shoaly-type river, and it didn’t take long for me to realize that it worked pretty darn good in a lot of lakes that have shallow backwaters and silted-in creeks.

“To be able to just run in out of creeks – over those big silted-in flats – at will, without worrying about hitting anything makes it an invaluable tool here on these lakes in the southeast.”

When it comes to shallow, silted-in creeks and backwaters, Wheeler Lake fits the bill, and Carter knew his tunnel hull would be an asset this week.

After running a lot of creeks in practice, Carter settled on Limestone Creek as his best shot at winning. Limestone has multiple tiny creeks seeping into it, and Carter utilized several of them throughout the week.

“I would fish back in the true creeks when it was sunny and slick,” he says. “And I did catch a few fish that way, but if the wind got up and we got some clouds, I’d go back out into the flats. When it got right in those flats, I could catch those better 4-pound fish out there.”

“The first couple of days, the swim jig was the key player,” Carter said. “Today, it was all about the buzzbait. The wind and clouds probably helped that bite – and I had some vicious bites on it today.

“This win has been a long time coming,” Carter went on to say. “I did a lot of celebrating out on the water today with some special fish catches. It’s something to finally pull one of these tournaments off; I get choked up just thinking about it.”

Smith took home an extra $1,000 as the highest finishing FLW PHOENIX BONUS member. Boaters are eligible to win up to an extra $35,000 per event in each Toyota Series tournament if all requirements are met. More information on the FLW PHOENIX BONUS contingency program can be found at PhoenixBassBoats.com.

Millsaps brought a 5-pound, 5-ounce largemouth bass to the scale Thursday – the largest fish weighed by a boater in the event.

The Toyota Series at Wheeler Lake was hosted by Decatur Morgan County Tourism. It was the second of three regular-season tournaments in 2020 for Southeastern Division anglers. The next event for Toyota Series anglers will be the Toyota Series at Lake Erie in Sandusky, Ohio, Aug. 18-20. For a complete schedule, visit FLWFishing.com.