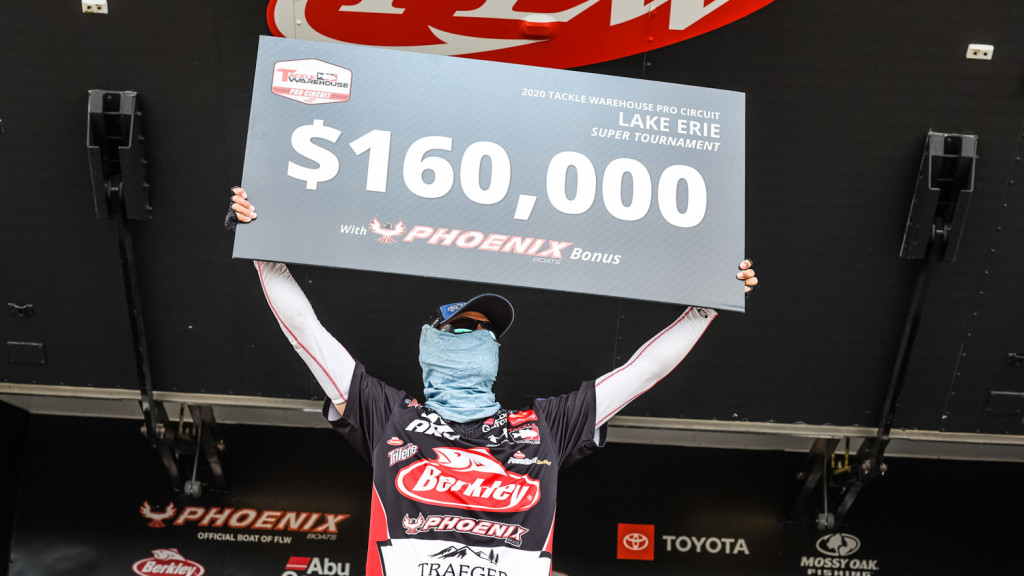 SANDUSKY, Ohio – Major League Fishing (MLF) pro Justin Lucas of Guntersville, Alabama, brought a five-bass limit to the stage Friday weighing 19 pounds, 10 ounces, to win the Tackle Warehouse Pro Circuit at Lake Erie. Lucas’ four-day total of 20 bass weighing 79-2 gave him the victory by just one ounce over the No. 1 ranked angler in the world, second-place pro Jacob Wheeler of Harrison, Tennessee, and earned Lucas the top prize of $160,000, including the lucrative $35,000 FLW PHOENIX Bonus contingency award. The victory was the first pro-level win of Lucas’ career in FLW competition.

“I’m at a loss for words because when I went out today, I was not expecting to win,” said Lucas, who pushed his career earnings to more than $1.68 million. “I expected to go out there and try to catch a big bag., but I really felt like Wheeler and Bertrand were going to put something special together.

“Then, to only win by one ounce… I’ve had that fall the other way on me before,” Lucas continued. “Early in my career I lost by 3 ounces to Scott Martin on the Potomac River, and I really needed the money back then. It was a big deal – a $90,000 difference. And this one was even bigger – a $125,000 difference. So, for it go in my favor this time is huge.”

Lucas said that he spent most of his week targeting a big piece of sunken steel off of a shoal near Kelly Island.

“I don’t know if was a sunken boat or an old channel marker or what – I’ve been calling it the space missile all week – but the fish were using the backside of it as a current break,” Lucas said. “It wasn’t hard to stay on because it was big – like 16 feet long and 5 feet tall.”

Lucas used the same bait all week, also the same bait that he dominated the MLF Bass Pro Tour event at Sturgeon Bay with last month – a Berkley PowerBait Maxscent Flat Worm (green-pumpkin). He fished the worm on a drop-shot rig with a ½-ounce weight and an unnamed No. 2 drop-shot hook on Berkley X5 Braid Line Crystal tied to an 8-pound Trilene 100% fluorocarbon leader. His rod and reel setup was a 7-foot medium-action Abu Garcia Fantasista Premier Spinning Rod paired with a size 30 Abu Garcia REVO MGXtreme Spinning Reel.

“I really felt like I had found the right quality of fish in practice and I knew that if I could go out there and capitalize on my bites – get 5 to 7 bites a day – I could make it work,” Lucas said.

“The last two years have been a struggle. I got my butt kicked in the first four tournaments this season. So to end my season like this, cashing five checks in a row and winning this one – the most money I’ve ever won in my life – I definitely feel like I turned my entire season around,” Lucas went on to say.

Overall there were 44 bass weighing 144 pounds, 8 ounces caught by pros Friday. Eight of the final 10 pros weighed in five-bass limits.

The Tackle Warehouse Pro Circuit Super Tournament at Lake Erie was hosted by the City of Sandusky and the Lake Erie Shores & Islands Welcome Center. The total purse for the event was more than $1.3 million, including a top prize of up to $160,000.

In Tackle Warehouse Pro Circuit Super Tournament competition, the full field of 187 pro anglers competed in the two-day opening rounds on Tuesday and Wednesday. The top 50 pros based on their two-day accumulated weight advanced to Thursday. Only the top 10 pros will continue competition on Championship Friday, with the winner determined by the heaviest accumulated weight from the four days of competition.

Pro Ron Nelson of Berrien Springs, Michigan, the 2019 Polaris Rookie of the Year, clinched the 2020 AOY title this week after his 34th place finish. Nelson will receive his entry fees paid for the entire 2021 Tackle Warehouse Pro Circuit season for his win.

FLW tournament fishing can be seen on the Emmy-nominated “FLW” television show while Bass Fishing magazine delivers cutting-edge tips from top pros. Acquired by Major League Fishing in late 2019, FLW has expanded its programming in 2020 to the Outdoor Channel and the Sportsman Channel as well as on-demand at MyOutdoorTV (MOTV).