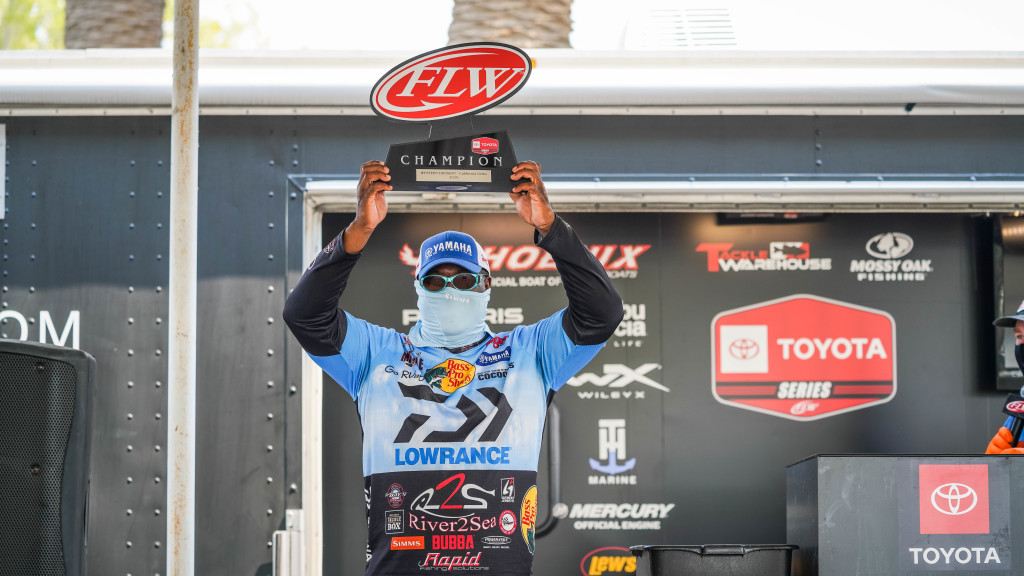 OAKLEY, Calif. – Major League Fishing Bass Pro Tour angler Ish Monroe of Oakdale, California, brought a five-bass limit to the scale Friday weighing 21 pounds even to win the three-day Toyota Series at the California Delta tournament in Oakley, California. Monroe’s three-day total of 15 bass weighing 65-13 earned him the win by a 16-pound, 7-ounce margin – the third-largest margin of victory in Toyota Series history – over second-place angler Beau Joudrey of Oakley, California, and earned Monroe the top payout of $23,420 in the second tournament of the 2020 Toyota Series Western Division.

"The first day, we had a slack tide in my best area, so I started on a different spot just because the tide was running," said Monroe, who earned his third career FLW victory on the California Delta. "There was some current there, and I started punching and caught them right away. I had over 20 pounds in the first hour."

Monroe fished a Missile Baits D Bomb in the PB&J color on a 5/0 or 6/0 River2Sea Ish Monroe New Jack Flippin hook and had two different weight sizes depending on where he was punching.

After sacking 21 pounds, 4 ounces on the first day, Monroe found himself in third place, and when the second day rolled around, he went right back to where he started the first day.

"Obviously, if you catch 20 pounds somewhere so fast, you’ll go back and check it out," Monroe said. "I went to that same stretch and caught one good one and a few decent ones to get me started. From there, I went to the area I wanted to fish the first day and started throwing a frog."

Monroe is known for his prowess with a frog, and he proved why again on the California Delta with some key fish, including a 7-pounder on the second day.

"I got to my spot and missed a giant," Monroe said. "About 30 feet further down the stretch, I caught that 7-pounder. I already had a 4- and 6-pounder boxed, and that's how I got that bag.”

His frog this week was yet another product that bears his name, the River2Sea Ish Monroe Phat Mat Daddy Frog in the yellow head color. He fished it on his signature series 7-foot, 4-inch heavy Daiwa Tatula Elite rod with a 7.1:1 Daiwa Tatula Elite reel spooled with 55-pound-test Daiwa Samurai braided line.

Going into the final day, Monroe had a lead of 7 pounds, but on a fishery with plenty of 10-pounders swimming around, he knew he would have to catch them again to secure the win.

"I started the day in the same general area I’d been fishing all week," said Monroe, who revealed he was in what locals refer to as the "Middle Delta" area. "I didn't fish the same exact areas, but I was close by all three days."

On the final day, he started fast and quickly caught a limit punching in water that was between 1 and 6 feet, the critical depth he targeted all week.

"Right off the bat, I had a limit," he said. "After that, I ran to my frog area and never got bit. I made another little move and caught one about 4 pounds punching and then caught one over 8 pounds and that did it."

Ryan Diatte of Gilroy, California, took home an extra $1,000 as the highest finishing FLW PHOENIX BONUS member. Boaters are eligible to win up to an extra $35,000 per event in each Toyota Series tournament if all requirements are met. More information on the FLW PHOENIX BONUS contingency program can be found at PhoenixBassBoats.com.