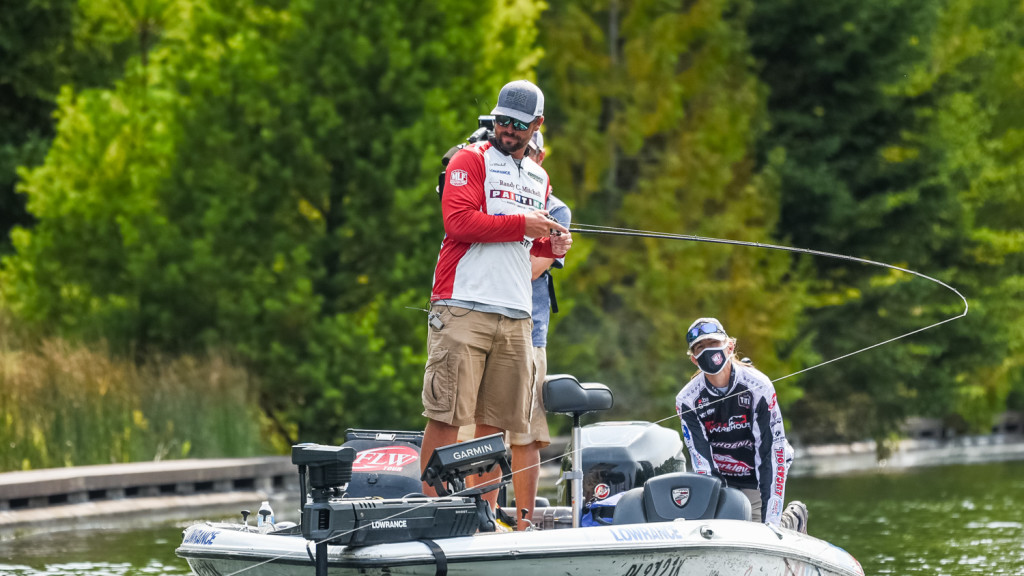 STURGEON BAY, Wis. – Fishing conditions were a little tougher Wednesday at the Tackle Warehouse TITLE presented by Toyota, the FLW Pro Circuit Championship on Lake Michigan in Sturgeon Bay, Wisconsin. Luckily for pro Kurt Mitchell of Milford, Delaware, he caught so many bass on Monday that it truly didn’t matter. After catching 119 pounds, 10 ounces on Monday, Mitchell added another three bass for 8 pounds, 5 ounces on Wednesday to win the Qualifying Round with a two-day cumulative total of 36 fish for 127-15.

Pro Evan Barnes of Hot Springs, Arkansas, finished the round in second place with 29 bass totaling 90 pounds even. Alpine, California pro Rusty Salewske was one of the big movers of the day, catching the most weight – 13 bass for 44 pounds, 6 ounces – to vault from 16th place into seventh with a two-day total of 64-7, while local pro Matthew Stefan of Junction City, Wisconsin, remained in the hunt for $200,000, catching a two-day total of 20 bass weighing 68-5 – good for sixth place.

“Today was a much tougher day for me, but that’s fine because I didn’t fish any areas that I knew were holding bass. I pretty much spent the day practicing and looking for new areas for the Knockout Round,” said Mitchell, who has four career top-10 finishes in FLW competition. “The bad news is that I didn’t really find anything new, but that is okay. There are hundreds of fish right here, so I’m going to keep pounding away at them and try to figure them out each every day.”

Mitchell said he was going to spend his “off day” on Thursday scouring the local tackle stores.

“I need to find a good tackle shop tomorrow because I’m running out of drop-shot baits,” Mitchell said. “I’ve thrown so many Yamamoto Shad Shape Worms that I’m almost out.

“I also plan on throwing a spybait on Friday for a little bit,” Mitchell continued. “I’ve had good luck with them on highly-pressured fish, so I think that could be a player. I’m just excited to get back out there. I’ve had a lot of fun with the Major League Fishing (MLF) format and I’m ready to get back out there again and put the hammer down.”

The top 10 pros from Group A that now advance to Friday’s Knockout Round are:

Overall there were 174 bass weighing 559 pounds, 13 ounces caught by the 25 pros in Group A Wednesday.

Unique to the TITLE Championship, the event is being fished using the MLF catch-weigh-immediate release format. A select group of 25 pros (Group A) competed on Days 1 & 3 (Monday & Wednesday), with the other 25 pros (Group B) competing on Days 2 & 4 (Tuesday & Thursday). The top-10 pros from each group based on their cumulative two-day total will advance to Day 5 (Friday). Only the top 10 pros will continue on to the sixth and final day of competition Saturday, with the winner earning the inaugural Tackle Warehouse TITLE Championship Belt presented by Toyota.