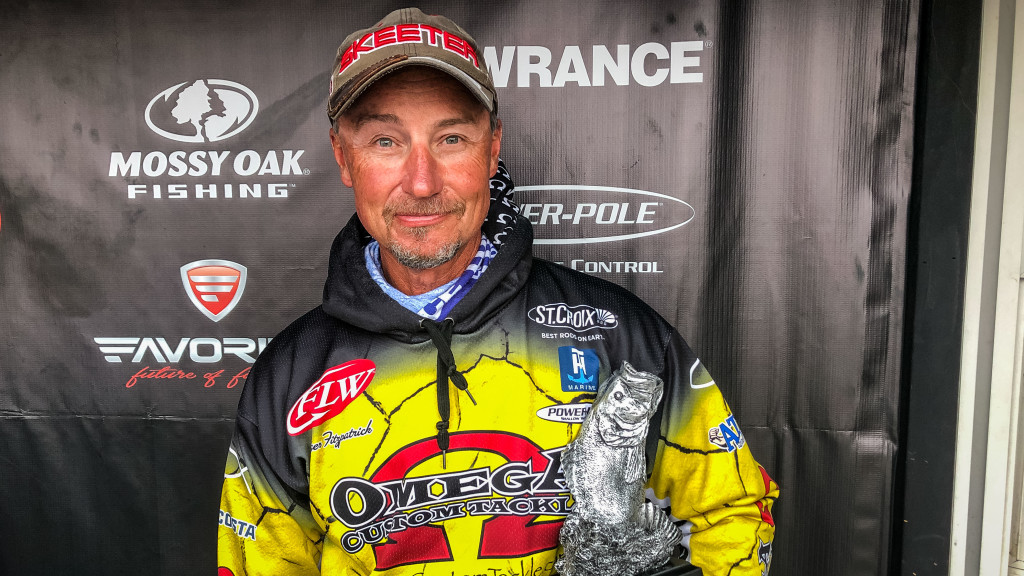 “I caught most of my fish on a 1-ounce Omega Football Jig,” said Fitzpatrick. “The area I was fishing was slick, with no wood or rock – the only thing that jig hung on was the jaw of the bass I kept pulling out.”

Fitzpatrick said the fish in his honey hole were abundant.

“My co-angler and I got a limit within a half hour on the spot on day one,” said Fitzpatrick. “The second and third day it took me until about 11 a.m. to get a limit. I culled seven or eight times on the final day, but I was only culling ounces – I told her I’d already made the All-American, but the only chance for a win was to go shallow and catch a couple big ones.

“On the second dock, I flipped a ½-ounce Omega Flippin’ Jig and caught a 4-pounder and then a 3-pounder.”

Fitzpatrick said those two fish were the difference makers in his 4-ounce victory.

“This is amazing,” said Fitzpatrick. “God’s got a plan and He is so good.”

Busby took home an extra $500 as the highest finishing FLW PHOENIX BONUS member. Boaters are eligible to win up to an extra $7,000 per event in each Phoenix Bass Fishing League presented by T-H Marine tournament if all requirements are met. More information on the FLW PHOENIX BONUS contingency program can be found at PhoenixBassBoats.com.

Melinda Hays of Hot Springs, Arkansas became the first woman to win a Phoenix Bass Fishing League Regional Championship in FLW history. Hays weighed 10 bass over three days totaling 22 pounds, 4 ounces and took home the top co-angler prize package of $50,000, including a new Phoenix 819 Pro bass boat with a 200-horsepower Mercury outboard. Hays will be only the fourth female angler in FLW history to qualify for or compete in the Phoenix Bass Fishing League All-American.

The top six co-anglers that qualified for the 2021 All-American were: