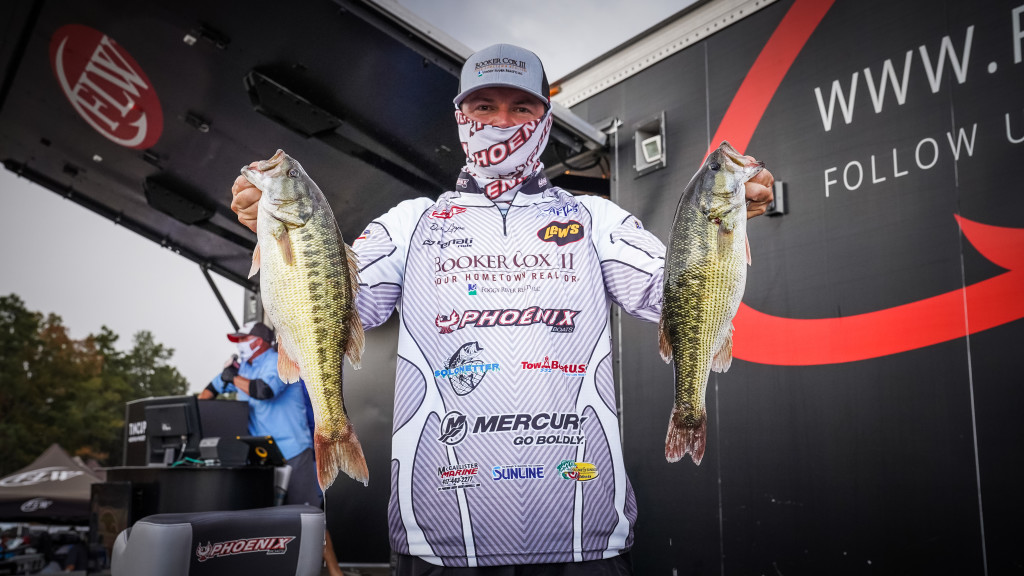 “It was tough out there today,” said Lippe, who qualified through the Bass Fishing League Ozark Division. “Practice seemed to be pretty good – I could catch numbers, and the size was better than I anticipated. This morning, that was not the case. I started off with a small limit – like 7 pounds – and I eventually stumbled on to one that weighed close to 3½ (pounds) and that helped.

“It was slow the rest of the day, then in the last 10 minutes I caught one that culled up my weight another pound and a half. I weighed in all spotted bass. I had been catching some largemouth, but I could not get them to bite today.”

The Missouri angler said that the key to his day was covering a lot of water.

“I’m watching them on my electronics – I’ve got LiveScope – and just video game fishing and covering a lot of water,” Lippe said. “That can be very frustrating too, at times, because I can see them and then they don’t bite. I’ve just been throwing a lot of reaction baits.

“I caught 11 or 12 keepers, which sounds better than it is because quite a few were 13-inchers,” Lippe went on to say. “I need to figure out if I’m going to try to do the same thing tomorrow or change it up. I’m happy with 12 pounds, but I only had three good fish and I know that I’ll need something more. I’m excited to get out there tomorrow, but I’m not sure what’s going to happen.”

The top 10 boaters after day one on Lake Hartwell are:

Overall, there were 170 bass weighing 262 pounds even, caught by 52 co-anglers Wednesday. The catch included 18 five-bass limits.

All-American competitors will take off from Green Pond Landing, located at 470 Green Pond Road in Anderson, at 7:30 a.m. EST each morning. Weigh-in will be held at the landing at 4 p.m. daily. Attendance is limited to anglers, family and essential staff. Fans are encouraged to follow the event online through the daily coverage, live blogs and photos at FLWFishing.com.

In addition to the cash payouts, the highest-finishing boater and co-angler from each of seven Regional Championships (including the Wild Card) at the All-American will advance to the 2020 Toyota Series Championship next month on Lake Cumberland for a shot at winning $235,000 and $33,500, respectively.

The full field of anglers compete on Wednesday and Thursday, with only the top 10 boaters and top 10 co-anglers based on cumulative weight from the first two days continuing to Championship Friday. The 2020 All-American champions will be determined by the heaviest three-day total weight.