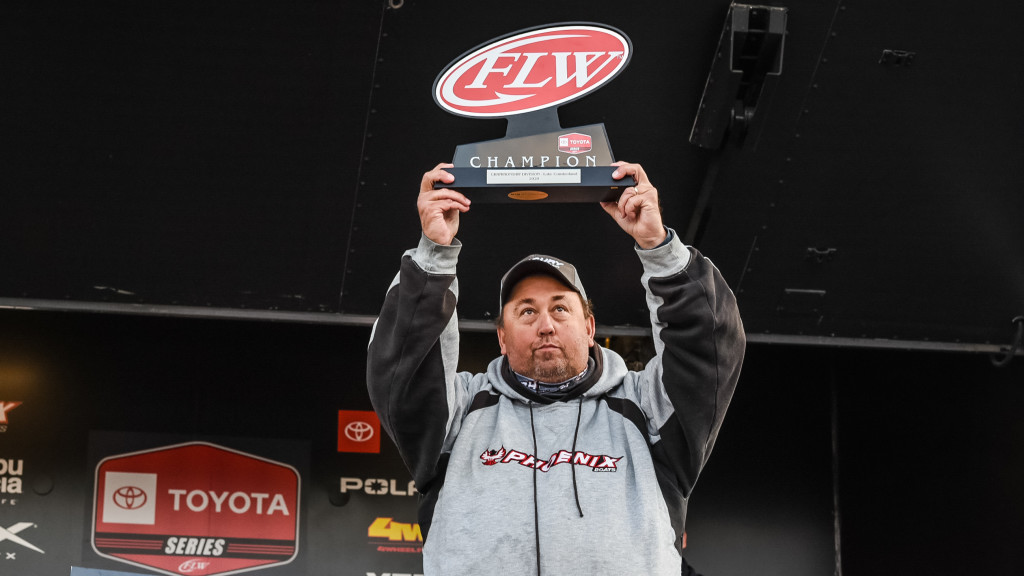 BURNSIDE, Ky. – Pro Chris Malone of Ironton, Ohio, brought a five-bass limit to the stage weighing 12 pounds, 5 ounces, Saturday to claim the title of Toyota Series Champion at the 2020 Toyota Series Championship on Lake Cumberland. Malone, with a three-day total of 15 bass for 41 pounds even, won by a 1-pound, 3-ounce margin over second-place angler Cameron Lineback of Mount Airy, North Carolina, who caught a three-day total of 15 bass weighing 39-13. Malone held steady in third place the first two days of competition before shooting to first on Saturday to walk away with $235,000, including the lucrative $35,000 FLW PHOENIX Bonus.

Saturday’s final weigh-in marked the finale of the 2020 Toyota Series season, which featured thousands of anglers from across the globe.

“I opened a boat shop in 2010 and took some time off from competitive fishing, but when I saw the championship was at Lake Cumberland again, I knew I needed to fish the Toyota Series,” said Malone. “I wanted to see if I could compete because I haven’t competed against these guys for a long time.

“I really thought Ryan Davidson was going to win this tournament – he’s the best winter fisherman I’ve ever fished with. I told him that if I actually won, I would pay his 2021 entry fees (to the Tackle Warehouse Pro Circuit). That $30,000 is a drop in the bucket compared to how I feel right now.

“I’m on a high you can’t come off of – I honestly wasn’t going to fish next year, but how do you not fish after you just won a quarter of a million dollars?”

Malone said he caught pretty much all of his fish this week on the main lake with main-river channel swings.

“The fish are super shallow, but they are on top of 25 to 40 foot of water in some of these places,” Malone said. “I’ve been catching them cranking and on a ½-ounce Big Daddy Baits tail-spinner. After getting six or seven keepers, I picked up a big bull shad and tried to catch big ones for the last two hours. I used a G. Loomis IMX Pro rod with a Shimano Curado reel with 15-pound Seaguar InvizX line. I weighed in three on the RkCrawler and 12 on the spinner.

The top 10 pros at the 2020 Toyota Series Championship on Lake Cumberland finished:

The top 10 co-anglers at the 2020 Toyota Series Championship on Lake Cumberland finished:

The 2020 Toyota Series Championship at Lake Cumberland was hosted by the Somerset Tourist & Convention Commission and the Burnside Tourism Commission. The three-day, no entry fee tournament featured a field of 221 boaters and co-anglers from each of the eight Toyota Series divisions and tournament winners, the highest finishing boater and co-angler from each regional at the All-American, the College Fishing National Champions and second-place team, and the top pros and co-anglers from the FLW International Division.

“Somerset  tourism in conjunction with Burnside tourism is thrilled to host the 2020 FLW Toyota Series Championship on Lake Cumberland,” said Leslie Ikerd, Director of Tourism, Somerset & Convention Commission. “The excitement  to host anglers from across  our country was palatable and everyone we have encountered has been so complimentary of our event staff and community. The FLW team has been outstanding and a complete joy to work alongside throughout this process – we look forward to having them back to Lake Cumberland in the future.”

Lake Cumberland boasts more shoreline than the coast of Florida and attracts over 4-million visitors per year.

“We love having the spotlight of the United States and other nations directly on Lake Cumberland, Burnside and Somerset, Kentucky,” said Frank Crabtree, Executive Director of Burnside Tourism and Recreation Commission. “Lake Cumberland continues to grow as one of the best fisheries and a top vacation spot within a days’ drive in the Eastern part of the nation. Launching the 2020 Toyota Series Championship from the beautiful Burnside Island continues to showcase our easily accessible natural beauty and amenities.”