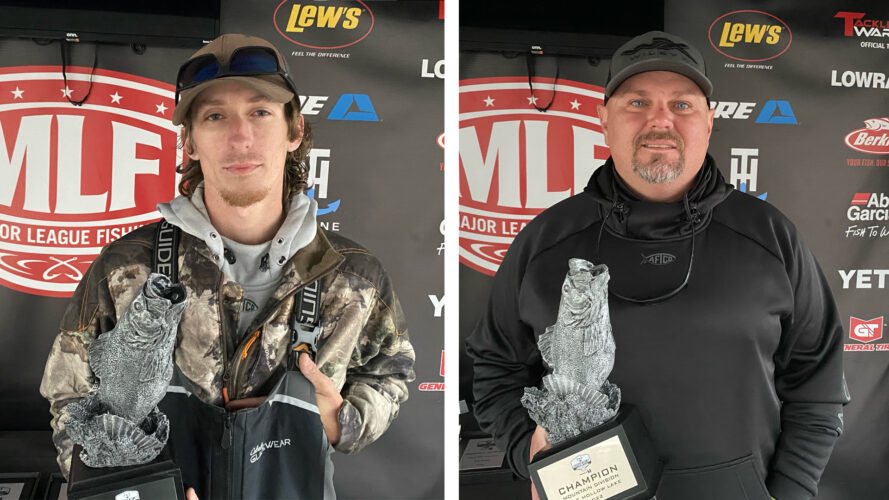 “We took off in the morning and made a run down the lake,” Abbott said. “I’d been on some fish and been catching them for the majority of the winter, and was very blessed they had stayed in the same area.

“I had one of the fish I weighed in the first hour or so,” Abbott said. “And it went from there. I was pleased with my day. I fished clean throughout the day and didn’t lose any fish.”

Abbott said he spent the majority of his day trying to boost his bag of 4-pounders by targeting staging fish, mid-lake around chunk rock and channel swings that were holding baitfish. Abbott said his baits of choice were an Alabama rig and a Berkley Stunna Jerkbait.

“It was a good day of fishing all the way around,” Abbott said. “This win is long overdue. I’ve finished second a couple of times, and I won Angler of the Year last year in the Mountain Division, and I’d like to repeat that.”

Jonathan Green of East Bernstadt, Kentucky, had a 5-pound, 7-ounce largemouth that was the heaviest of the event in the Boater Division and earned the day’s Berkley Big Bass Boater award of $1,000.

Christopher Logsdon of Brownsville, Kentucky, caught the largest bass in the Co-angler Division, a fish weighing in at 4 pounds, 8 ounces. The catch earned him the day’s Berkley Big Bass Co-angler award of $500.