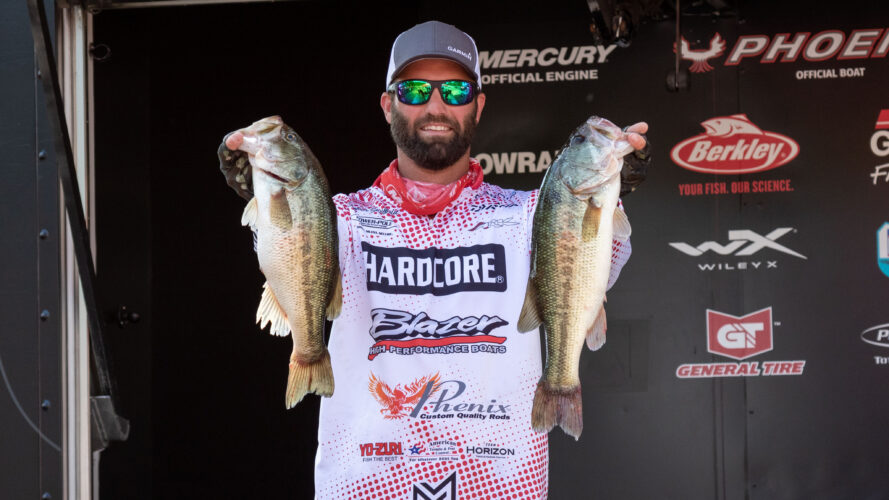 GUNTERSVILLE, Ala. – While Lake Guntersville continues to show out for anglers across the board, pro Spencer Shuffield of Hot Springs, Arkansas, finished yet another stellar day, bringing a limit weighing 19 pounds, 6 ounces to the stage Saturday to lead the final 10 anglers and advance to the final day of competition at the B&W Trailer Hitches Stop 4 on Lake Guntersville Presented by A.R.E. in Guntersville, Alabama. Shuffield’s three-day total of 63 pounds, 7 ounces, was a mere 12 ounces over rookie Nick Hatfield of Greeneville, Tennessee, who brought a limit weighing 21-15 to the scales for a three-day total of 62 pounds, 11 ounces, good for second place.

After starting the day in 32nd place, pro Brandon Mosley of Choctaw, Oklahoma, made the biggest move of the day, bringing a limit weighing 20 pounds, 4 ounces to the scale for a three-day total of 54-7 to slide into the 10th and final spot in Sunday’s Championship Round.

The final 10 anglers are now set, and competition will resume tomorrow on Championship Sunday, where weights are zeroed, and the angler that catches the heaviest five-fish weight will earn the top prize of up to $135,000.

“I caught a limit pretty quick today, then idled around and ended up finding some good stuff later in the day,” Shuffield said. “I had 18 pounds or so and made a cast on a new school I found and caught a 4½-pounder to cull out a 3½-pound spotted bass, so it worked out pretty good.

“The spot where I’ve been catching my big fish all week, I thought I could win off of that spot, but after today I no longer think you can win there. As a matter of fact, I don’t even know if I’m going to try to fish it tomorrow,” Shuffield said. “The second school I found during practice had the same potential as that main spot, I just haven’t had a chance to fish it because there have been two or three other guys on it all the time.”

Shuffield said fish out on the ledges just don’t seem to want to bite when there are multiple guys fishing them, and that rings especially true for the bigger bass.

“Today, I was able to pull up on that second spot and there was no one on it,” Shuffield said. “The fish were set up just right and biting nearly every cast I threw at them, and there were even bigger ones following the ones I had hooked up all the way to the boat.”

“The cool thing about that crankbait is that you typically have to have current on those ledges to make the fish bite it, but the way I’m fishing it is forcing them to bite,” Shuffield said. “I feel like as long as they are bunched up together, current or no current, I can still get them to bite, just because of the way I’m presenting it. It’s completely a reaction deal, they have no choice but to snap at it, and they’ve been eating it really well.

“I’d be netting a 4-pounder on that second spot today and there would be six or seven 5-plus-pounders right there with her,” Shuffield said. “I’ve left a lot of big ones out there this week, so I’m really looking forward to getting back out there and leaning into them tomorrow.”

The Top 10 pros advancing to the final day of competition Sunday on Lake Guntersville are:

Anglers finishing 11th through 50th are:

The Tackle Warehouse Pro Circuit Presented by Fuel Me B&W Trailer Hitches Stop 4 at Lake Guntersville Presented by A.R.E. is hosted by Marshall County Tourism and Sports and features a total purse of more than $850,000.

In Tackle Warehouse Pro Circuit competition, the full field of 156 anglers competed in the two-day opening round on Thursday and Friday. The Top 50 pros based on their two-day cumulative weight advanced to Saturday. Now, only the Top 10 pros, based on cumulative weight from the first three days, will continue competition on Championship Sunday, where weights will be zeroed and anglers will compete in a one-day shootout for the grand prize of up to $135,000, including the lucrative $35,000 Phoenix MLF Bonus for qualified anglers.

The final 10 anglers will launch at 6:30 a.m. CT Sunday from the Lake Guntersville State Park, located at 1155 Lodge Drive, in Guntersville. Sunday’s Championship weigh-in will also be held at the park at 2:30 p.m. Fans are encouraged to attend the event or follow the live on-the-water action on MLF NOW! beginning at 7 a.m. CT at MajorLeagueFishing.com.

The Tackle Warehouse Pro Circuit B&W Trailer Hitches Stop 4 at Lake Guntersville Presented by A.R.E. will feature live on-the-water coverage and a two-hour action-packed television show that will premiere in July on the CBS Sports Network.