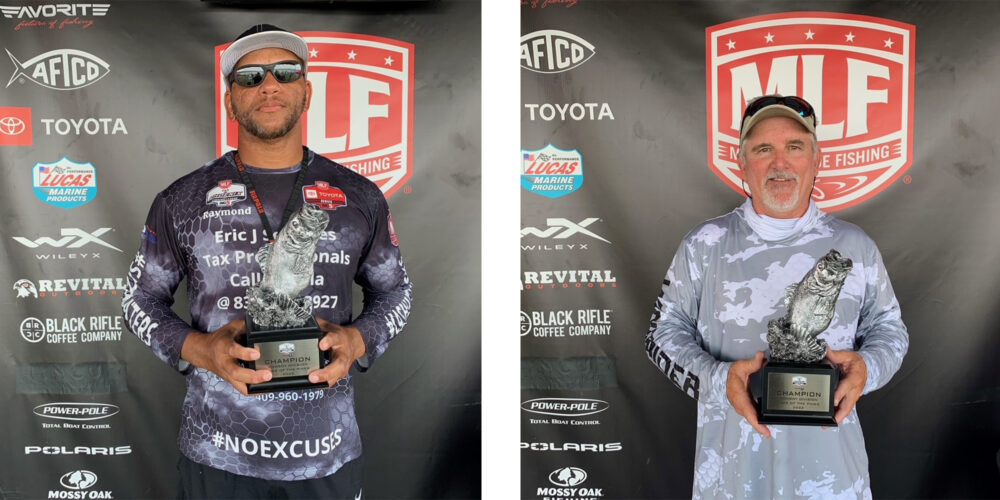 “There were other boats at the spot I wanted to start at, but one left, and I was able to move in where I wanted to a little closer,” Ford said. “My co-angler caught a 3-pounder first on a wacky worm. I’m a crankbait fisherman but tried a jigging spoon, a tail spinner and a drop-shot rig, but I ended up going back to my crankbait.”

“About every hour I would hook into one,” Ford said. “I fished clean and didn’t lose any fish. My first four fish weighed more than 20 pounds.

“The water temp was 85 degrees with an air temperature of 90 degrees,” Ford said. “We were doing everything we could to keep fish alive.”

Ford said he called the tournament director to see if he could weigh in early to preserve the fish he had and ended up weighing in by 1 p.m.

“With bass fishing, there are a lot of lows,” Ford said. “I zeroed in my last tournament, so to go from zero to win this one, I won’t lie to you, this feels real good. But I’m staying humble. I know I could go out next week and strikeout. But I’m enjoying the moment right now.”

Ford’s largemouth that weighed 8 pounds, 2 ounces, was the heaviest of the event in the Boater Division and earned the day’s Berkley Big Bass Boater award of $650.

Smith caught the largest bass in the Co-angler Division, a fish weighing in at 6 pounds, 9 ounces. The catch earned him the day’s Berkley Big Bass Co-angler award of $325.

The 2022 Phoenix Bass Fishing League Presented by T-H Marine is a 24-division circuit devoted to weekend anglers, with 128 tournaments throughout the season, and five qualifying events in each division. The Top 45 boaters and Strike King co-anglers from each division, along with the five winners of the qualifying events, will advance to one of six Regional Championships where they are competing to finish in the top six, which then qualifies them for one of the longest-running championships in all of competitive bass fishing – the Phoenix Bass Fishing League All-American. The 2022 All-American will be held June 2-4 at Lake Hamilton in Hot Springs, Arkansas, and is hosted by the Arkansas Department of Parks and Tourism and Visit Hot Springs.