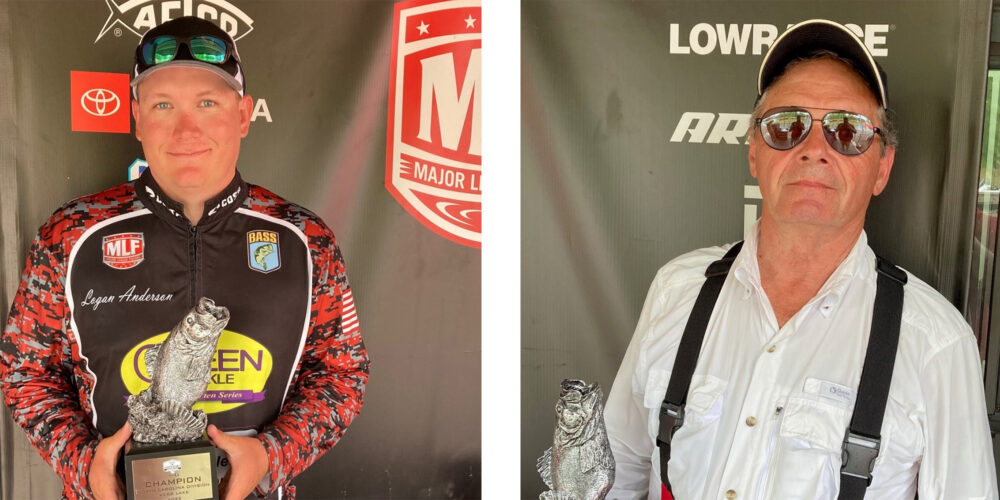 “We had a fog delay and still had a little bit of fog when we took off, so I knew a lot of people would stay in Nutbush and fish,” Anderson said. “I wanted to get as far away from that as I could. But, that’s the place I’m most familiar with, so I started right at the mouth of Nutbush.”

Anderson said he began fishing docks with a Queen Tackle Glimmer Blue Shad Tungsten Swim Jig and immediately caught a 4-pound bass. His co-angler caught one that weighed three pounds, so Anderson said he knew good fish were in the area. After he missed another good fish and then caught another 4-pound fish, Anderson said it was time to relocate.

“After we ran out of stuff there, we took a run up the lake to Ivy Hill,” Anderson said. “I caught some more on the swim jig and then caught a couple on a new Queen Tackle prototype spinnerbait that is coming out. That’s all I did all day – fished docks and laydown trees as the main source of cover.”

Anderson said the swim jig and spinnerbait produced 12 fish during competition – seven of which were keepers.

“Until I put them on the scales I would not have believed I had almost 18 pounds,” Anderson said. “This is my first year fishing BFLs as a boater, and as hard as it is to win one, it’s insane to win in just my third try.”

Todd Harris of Lexington, North Carolina, and Staley both had largemouth that weighed 4 pounds, 13 ounces that were the heaviest of the event in the Boater Division. Harris and Staley split the day’s Berkley Big Bass Boater award of $750.

Seals and Jones tied for the largest bass in the Co-angler Division with fish weighing in at 4 pounds, 7 ounces each. They split the day’s Berkley Big Bass Co-angler award of $374.