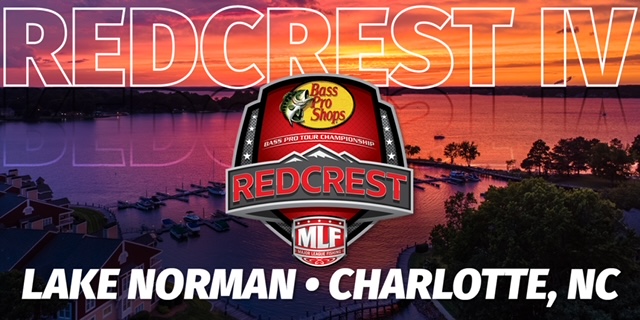 REDCREST IV will showcase the top 40 anglers from the 2022 Bass Pro Tour season competing for the REDCREST Championship trophy and the top prize of $300,000. Previous winners of the prestigious event include Bobby Lane (2022), Dustin Connell (2021) and Edwin Evers (2019).

In addition to the tournament and the international media coverage it receives, the MLF Outdoor Sports Expo featuring hundreds of exhibitors and activities will be held at The Park Expo & Conference Center in Charlotte. Fishing and outdoor enthusiasts will have the opportunity to visit booths and vendors showcasing the latest and greatest in fishing, boating, hunting, camping and more. The biggest names in the outdoor industry will be on hand, including all 80 Bass Pro Tour anglers. Visitors from around the globe will not only watch the world’s best bass-fishing action, but they’ll also receive great deals on everything from crankbaits to rods and reels to bass boats at the outdoor show.

“Following an exciting and successful REDCREST in Tulsa, we’re thrilled to announce that we’re bringing REDCREST IV to Charlotte. The city has a passionate outdoor community and offers numerous locations and facilities that will enable us to build the tournament and outdoor show in unique ways,” said Michael Mulone, MLF Vice President of Strategic Business Planning. “We are excited to work with the CRVA, Visit Lake Norman and the Mecklenburg Park and Recreation Department to deliver a memorable celebration of fishing and the outdoors to our fans and outdoor enthusiasts.”

Although Lake Norman has played host to dozens of MLF (and former FLW) tournaments over the years, this event will mark the first time that the MLF Bass Pro Tour will visit Lake Norman. The majority of MLF experience is limited to some Phoenix Bass Fishing League tournaments, a handful of Toyota Series events and five Tackle Warehouse Pro Circuit events – the last in 2016. This tournament will feature the MLF catch, weigh, immediate-release format in which anglers catch as much weight as they can each day, while also feeling the pressure and intensity of the SCORETRACKER® leaderboard.

“REDCREST IV is the most prestigious fishing event Lake Norman has ever hosted, and we very much appreciate the partnership with MLF, and formerly FLW, in hosting their events over the last couple of decades. Also, we could never host this type of event without our continued partnerships with the CRVA and Mecklenburg County Park and Recreation. We are thrilled to partner in making sure this is the best REDCREST yet,” said Sally Ashworth, Executive Director of Visit Lake Norman.

Each day of competition will be livestreamed on MajorLeagueFishing.com and the MyOutdoorTV (MOTV) app. Television coverage of REDCREST IV will be showcased across two two-hour episodes, premiering next summer on the Discovery Channel. A one-hour special episode, MLF REDCREST IV, is also scheduled to air next summer on CBS.